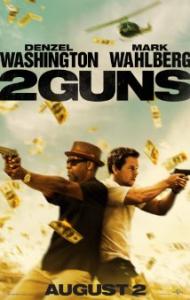 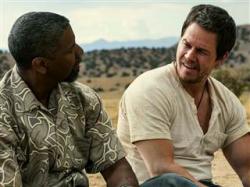 2 Guns is a fun time at the movies. Any implausibility in its plot is more than made up for by the charisma of its two stars, Denzel Washington and Mark Wahlberg. The two of them share a nice camaraderie and a sense of fun together that is infectious. My enjoyment of their antics was helped by the fact that I went into it with so little expectations.

This is one of those movies where the less you know about the details of the plot beforehand, the more you will enjoy it. I actually wish that I had known less about it before I watched it, but thanks to Hollywood's tendency to give away crucial plot details in the previews, I already knew too much. There are twists and turns aplenty in the story along with enough betrayals and backstabbing to go around. There's also plenty of action, but it's tempered by plenty of wicked humor.

The ageless Washington plays Bobby, while Wahlberg plays Stig. They're partners in crime, although neither of them is who they first appear to be. When the story opens they're making a deal in Mexico with Quince, a drug lord, played by Edward James Olmos. When it doesn't go as planned and they discover a friend of theirs has been killed, they decided to get their revenge by robbing a bank in Texas where they believe Quince stashes his cash. Instead of the $3 million they were expecting to take however, they find over $43 million stashed in the small town bank. Their robbery triggers a series of events that involve the CIA, the DEA and the United States Navy.

One of the nice things about this buddy movie is that race never enters into it. The fact that Washington is black and Wahlberg white, is never made an issue or even mentioned. Washington plays the more serious part. The brains of the outfit, if you will, while Wahlberg's Stig is like a big puppy dog who's full of energy and easily excited. Their banter and competitiveness makes them almost like brothers, particularly as the story progresses.

The violence, some brief nudity and adult language give the movie its R rating, which is equally refreshing. It's nice to see a movie that isn't aimed for the whole family and one that doesn't rely on CGI for every scene. A movie where actual actors take center stage is becoming increasingly rare in superhero obsessed Hollywood these days.The movie almost feels old fashioned and I mean that as a compliment.

Hollywood's other obsession is sequels and for once here's a movie I'd actually like to see generate one. The ending leaves an opening for one and so long as they keep the whole team together who made this one, I'd happily go and see it.

2 Guns is sort of an unorthodox variation on the buddy cop film genre, in a way. Bobby and Stig travel together like two unlikely friends, who actually are not friends but who really are. They are the bad guys who are actually good guys but do bad things. If none of that is clear, I refer to Scott’s line where he wrote that this film is best viewed without too much prior knowledge of the plot.

As long as the story focuses on the two of them “together” it all works like two opposing pieces somehow working in perfect unison. I was a bit frustrated by how long they each took to catch onto each other but it made for some interestingly tense moments. This is best demonstrated in the scene where they fight and end up pinning each other on the ground.  Bobby decides to end the stalemate, “All right, all right! On the count of three, we'll let each other go.” Stig agrees, so Bobby counts, “One, two, three.” But neither lets the other go, prompting Stig to state, “Now you're making me not be able to trust you.”

I have always enjoyed Denzel Washington’s work. At 58, he is playing a role that could have easily gone to someone decades younger. Normally actors of his age have long since settled into some movie persona but Washington continues to seem fresh on screen. He eases from dramatic roles to comedic ones as well as convinces in action parts. You cannot pigeonhole him, making him one of the truly great versatile actors of his generation.

I have only recently started to appreciate Mark Walhberg as an actor. It took me a while to get past the idea that a former underwear model/wanna be rapper was a legitimate thespian. He tried his hand as action star and leading man in dramas but something interesting happened when he began working in comedies. With The Other Guys (2010), Ted (2012), Pain and Gain (2013) and now this, Walhberg has demonstrated a genuine knack for humor. He provides most of the lighter moments, bouncing off Washington playing the straight man.

With so much action and a real sense of humor, I would eagerly watch a sequel as well. It more than made back its budget but was it enough to generate enough interest with the money men to concern themselves with it? My fingers are crossed. 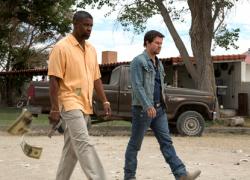 2 Guns is fast paced and fairly entertaining but it certainly helps to check any sense of reality at the door. The action quickly escalates to the point of ridiculousness. You know, the kind of stuff that can only happen in the movies where buildings are blown up without any serious repercussions happening. It has a rather cynical edge to it as it casts the CIA, the DEA and the United States Navy all in a questionable light. Everyone in the movie is corrupt on some level.

What makes it work is the camaraderie between the 2 guns of the title. Washington and Wahlberg make a great team. Bobby and Stig are memorable characters. No situation is too dire for them to stop their sarcastic wisecracking. Although they both break the law with impunity, as the heroes of the movie it is never in doubt that they will come out on top. The fun is in watching how they get there.

Their rapid fire repartee makes the movie. In one scene some chickens are buried alive up to their necks in the ground. Stig is eating something when he says to Bobby, “They're torturing chickens, man!” Bobby asks, “What is that you're eating?” “A chicken.” comes the reply. Mark Wahlberg's comic timing is impressive. He makes the scene funnier than it looks on paper.

The action sequences are decent if somewhat over-the-top, particularly the finale where all the opposing forces meet up for a final show down. To be honest it does sort of suit the style of the movie, which was based on a graphic novel. The combination of nonstop humorous dialogue mixed with extreme violence is a bit Tarantino-esque.

I'm not sure we need a sequel though. What would they call it anyway? 2 Guns 2. Or they could add a third character and call it 3 Guns. I'm over Hollywood's penchant for making any movie that turns a respectable profit into a franchise and then milking it dry. I'd like to see another movie starring Denzel Washington and Mark Wahlberg but I would prefer it to be an original story. They should let 2 Guns stand alone.