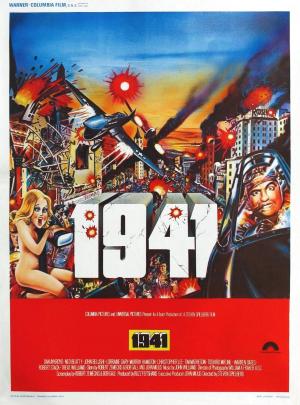 1941 is remembered today for being Steven Spielberg's first flop. Except that it really wasn't a flop at all. It actually turned a modest profit. But after the back to back blockbuster successes of Jaws and Close Encounters of the Third Kind it was viewed by the public as a failure. The mixed to negative reviews it received didn't help and to this day 1941 has never really been embraced by American audiences.

It does, however, have a bit of a cult following. And deservedly so. It's a gloriously over the top pastiche of war picture cliches. Imagine a crazy blend of Preston Sturges, National Lampoon, Dr. Strangelove and the Three Stooges and you'll have some idea of the types of humor on display in this colorful and chaotic comedy epic. The large cast of characters, the many cameo appearances, and the overall sense of disorder and madness is reminiscent of It's a Mad, Mad, Mad, Mad World.

The plot was loosely based on true events (the Great Los Angeles Air Raid of 1942 and the shelling of the Ellwood oil refinery by a Japanese sub being its main inspirations). It takes place on the Californian coast during a 24 hour period one week after the bombing of Pearl Harbor in December 1941. The big dance scene at the USO that turns into a riot and then spills out onto the streets in the movie was based on the Zoot Suit Riots of 1943, and there really was an occasion where the US Army placed an anti-aircraft gun in a private citizen's yard. Of course Spielberg exaggerates these situations greatly for comic effect.

The cast includes such up and coming comedy legends as Dan Aykroyd, John Belushi, and John Candy. Candy doesn't get much to do but both Belushi and Aykroyd are very funny. Aykroyd doing his deadpan delivery of complex lines of technical dialogue and Belushi providing the slapstick. Aykroyd get's one of the movie's most memorable lines when he stops the riot between sailors and soldiers by saying, “If there's one thing I can't stand seeing, it's Americans fighting Americans.” Belushi's best moment is when he bites the top off a bottle of soda pop and loudly guzzles its contents down while flying his plane.

Slim Pickens is hilarious as Hollis “Holly” Wood. “You won't get shit out of me. I've been constipated all week!” As is Robert Stack as Maj. Gen. Joseph W. Stilwell. “There will be no bombs dropped here.” He assures the crowd gathered for a press conference right before a bomb rolls across the ground and explodes. Christopher Lee and Toshiro Mifune play the villains. Lee's a Nazi and Mifune's the Commander of the Japanese submarine.

The frenetic pace never lets up as the panic and confusion escalate and these crazy characters act out their cinematic destinies. The climax includes two great sight gags. The first is a giant Ferris wheel that comes loose and rolls down the Santa Monica pier before crashing into the ocean and the second is a house that falls over the edge of a cliff on the beach. This final gag took days to set up properly but it makes a fitting finale to the comic mayhem that is 1941.

1941 is an homage to classic Hollywood (there are many little details inspired by old movies) by way of a 1970's sense of humor. Its look conjures up nostalgia for the 1940s even if it does rely on sexual innuendo and bathroom humor. The opening scene spoofs the director's first big blockbuster Jaws. Susan Backlinie repeated her role from that movie by going for a solitary nude swim. Only instead of a shark she encounters a Japanese sub. It sets the tone for all the silliness to come.

1941 is pure pandemonium of the comic variety. 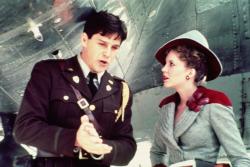 Tim Matheson and Karen Allen in 1941

Comparing the humor of 1941 to a Preston Sturges, National Lampoon, Dr. Strangelove and the Three Stooges is an insult to all of them. I will only agree with Patrick in that this is a colorful and chaotic comedy. At one point a tank drives through a paint factory and there is always plenty going on but little of it generates much laughter.

John Belushi plays a crazy pilot, flying about and accomplishing very little in the process, including doing anything worth laughing at. Tim Matheson trying to have sex in a plane with Karen Allen is enough material for a single joke about how planes turn her on, yet they drag it out for most of the film. The dance and subsequent riot scenes are energetic and  fast paced but only serves to allow Dan Aykroyd a chance to give an inspiring speech that is neither funny nor all that inspiring.

In that is the problem with this movie. Everything for a good comedy seems in place but no one seems to know how to execute any of it for a laugh. One guy takes a puppet with him on look out for a Japanese invasion on top of a Ferris wheel? Belushi thinks the plane with the couple trying to have sex in it is a Japanese plane and attacks it? “Take that Tojo. Take that.” When Ackroyd notes the city lights are still on during a blackout he decides to use the gun on the tank to shoot them all out. Sure, those things are wacky but they are just set ups without a good punch line.

The only time I truly found any humor to enjoy was when Slim Pickens gets captured and taken aboard the Japanese submarine. I agree with Patrick that he is hilarious. Upon seeing a German officer onboard the submarine, Pickens exclaims in his distinct voice, “Jesus Palomino, a Nazi. I knew it, you're all in cahoots. Well let me tell you something, Mr. Heinie Kraut, I fought your kind in the great war, and we kicked the living shit out of you!”

Steven Spielberg has made many great films in many different genres but a successful all out comedy film still eludes him. I firmly point the finger of blame on him and the writing by Robert Zemeckis for the failure of 1941. The cast is all completely capable but they are simply not given much to do, or say, that is at all funny. Sure plenty of ridiculous, zany stuff happens but damn little of it is genuinely humorous.

Spielberg and Zemeckis forgot to include one important character, the straight man. While everyone is running around fighting each other or the Japanese, or chasing a girl, or destroying a home, someone needed to be a voice of reason that reacts to all the craziness. Picture Curly doing something stupid without Moe there to slap him for doing it. Think of Arthur getting drunk without Hobson feigning shock and disgust. The straight man is the center of the film whose reaction to all that goes on around him is often funnier than the entire goings on. We have plenty of zaniness in 1941 but no one to cue the audience into whether or not this film is taking place in a world where such things are normal or not. 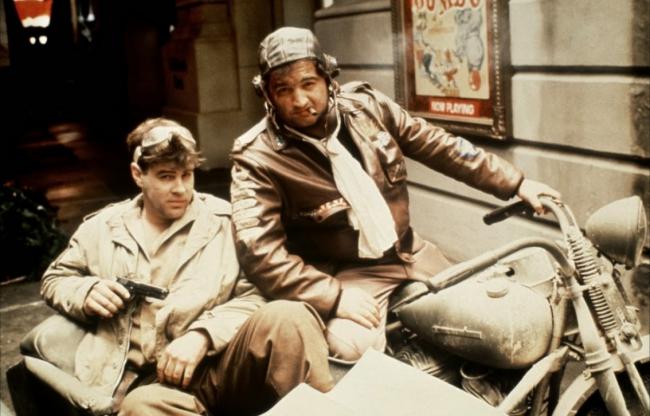 After the one-two whammy that was Jaws and Close Encounters of the Third Kind, Spielberg could probably have filmed paint drying for 90 minutes and still turned a profit. Thanks to his success with those two earlier movies, he also could have hired any actor in Hollywood to appear in this one. Supposedly even John Wayne expressed interest in seeing the script and Spielberg offered him the part of General Stillwell, but after reading it, Wayne not only turned down the part, but advised Spielberg not to film it, calling it un-American. Spielberg was able to sign Akroyd and Belushi, two of the hottest comedians of the age thanks to their time on Saturday Night Live. They too, no doubt, played into audiences desire to see this film. So, despite how bad this movie is, it doesn't surprise me that it earned a profit. When you see all of the talent involved you can't help but think, "Well, it can't be that bad." Sadly however, it really is as bad as its reputation.

Patrick used two phrases that sum up this movie, although our appreciation for them is on opposite ends of the spectrum. First he called it a "chaotic comedy" and that is exactly what it is. In fact, all of its humor is based on that chaos. You have a large cast of characters running around creating chaos, although little of it results in comedy. The second phrase Patrick used was "frenetic pace" and you cannot deny that it has that. It barrels ahead at full speed, never pausing to allow little things like character development or actual comedy to get in its way.

Comedy is cumulative. It often builds to a comic conclusion. Look at any of the great screwball comedies of the 1930s and they almost always build to some gathering, often a dinner party, where the humor is magnified because of all that came before it. If you watched the final scene first in many of those, they wouldn't be quite as funny on their own. You can see that Spielberg is trying to do something similar here, because the chaos increases as the film reaches its climax, but the comedy really doesn't. And if you haven't bought into this movie's idea of comedy before the climax arrives, you aren't going to be won over by the big finish.

Spielberg is a master craftsman and this movie, like all of his films, look good. I've always though that Spielberg has the most cinematic eyes of any director working today. His shots look exactly like what we expect a movie shot to look like. However, that isn't really what's needed in a comedy. During the filming of Monty Python and the Holy Grail, John Cleese would often clash with director Terry Gilliam, over Gilliam's attention to the production design. "How many laughs are the pots of smoke going to get?", Cleese would argue as he sat waiting for Gilliam to stop fussing over them. The same thing applies here to a certain degree. Yes, the movie looks good, but how many laughs are the artful shots or faithful reproductions of 1941 costumes generating?

Patrick also mentioned Dr. Strangelove, which reportedly was one of Spielberg's inspirations as he's a noted Kubrick fan. Interestingly, Spielberg showed the script to Kubrick who returned it to him with the advice of filming it as a drama instead of a comedy.  Spielberg also supposedly had the idea of turning it into a full scale musical in homage to the classic Hollywood musicals of the 1950s, but eventually elected not to do that either.

I think your enjoyment of this movie will be guided by two things. If you watched it as a child you may hold a fond memory of it that colors your view of it today. Or, you might be a huge fan of slapstick, because that's where all of the jokes come from. Very few things people actually say is very funny at all, except maybe for Slim Pickens, but that has as much to do with his delivery as what he's saying. But as Eric noted, this isn't a Three Stooges movie and there are better places to see that kind of humor if that's your thing.

Technically this movie wasn't a flop, but sometimes it isn't the numbers that determine a movie's success, but its reputation and legacy. And in terms of both of those, this movie is definitely a flop.