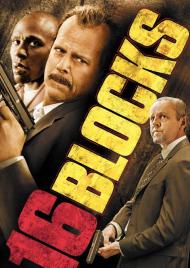 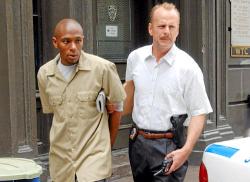 16 Blocks is one of those movies that is enjoyable enough so that it is possible to forgive the many plot holes in the script. Bruce Willis and Mos Def make a good team and they hold this remake of Clint Eastwood's The Gauntlet together.

Willis is Jack Mosley, a battered drunk of a New York Police Detective who's coming off of an overnight shift. Before heading home he is asked by his Lieutenant to escort a prisoner, Eddie Bunker (Def), 16 blocks to the court house where he is set to testify in an important court case. The one proviso is that Eddie must be at the court house by 10 am. A simple enough task.

Barely have they left the police station when Eddie's none stop chatter induces Mosley to stop off at a liquor store for a liquid breakfast. He returns to the car just in time to kill someone who's trying to break into it to kill Eddie. After calling for backup, Jack learns that Eddie is going to testify against a crooked cop and it is a small group in the NYPD who are trying to kill him, led by Jack's old partner. His ex-partner asks Jack to step aside and let them finish the job, but something in Jack rebels against the idea and he grabs Eddie and makes a run for it. The rest of the movie is Jack and Eddie's quest to finish the journey to the courthouse.

The action and continual movement keep you from questioning too much while you're watching, but afterwards you might wonder, as I did, why in this world of constant communication, did Jack not stop to call the media, the FBI, or the mayor's office, instead of going it alone. At one point he does call the District Attorney who's waiting for Eddie and she promises to send help, but nothing ever comes of it. The answer why he never calls anyone else is fairly obvious. If he did, the movie would be very short.

Willis, who seems to making a bit of a career for himself lately, playing world weary law enforcement professionals, does a fine job here as a Jack. He's out of shape, an alcoholic and a man of few words, but like a John Wayne character, you just know he's going to get the job done and do the right thing. Mos Def, meanwhile, continues to impress as an actor. His Eddie, who almost comes off as possibly a little mentally deficient, turns out to be a slightly more complex character than you might first believe. Seeing this as I did on Oscar Night eve, I couldn't help but think, while not for this role, that someday I would not be surprised if Def was nominated for one.

Although it has had about zero competition, I can confidently state that 16 Blocks is the best movie of 2006 so far. It looks as though Spring is finally here and the crappy movie dumping months of January and February are truly behind us. 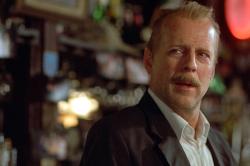 16 Blocks is a great paced movie with lots of tension and action. However, you know exactly where the movie is going the entire time and can guess how it will all play out. The character's destination is specifically established early on and the bad cops never hide their intent. The one plot angle I did not see coming was when Jack confessed to Eddie his own guilt. So what is left to enjoy are the good characters established by Willis and Def.

Eddie comes across almost as, pardon the politically incorrect term, retarded at first and Jack is nothing more than a drunken cop. They develop a companionship and we get to see them as more than just one dimensional. Def does a great accent and Willis morphs himself into Jack, a beat up cop with hidden demons.

Scott's complaint about Jack not calling in reinforcements is moot. He only has an hour to get this guy to the courthouse. How is the FBI going to help him in time? He purposely drops the cell phone when he realizes they are locating him by it. The call for help question never entered my mind. 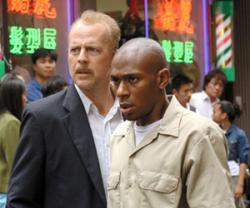 As my brothers said the characters of Jack and Eddie make this movie work despite a plot that is predictable and at times unbelievable. Neither is who they seem to be at the beginning of the picture. You assume Jack is just another burnt out cop lost in the bottle. Eddie seems like any small time criminal from the streets. Each man's redemption is well handled. Sure it's dramatic but never heavy handed. The action is what gets a bit over-the-top at times. The “second chance” that happens to these two men is completely believable.

Willis keeps his hand close to his chest as Jack. Over the course of the movie he slowly changes, becoming more open and human. Def holds his own in the showier of the two roles. His New York accent is comically rendered, very nasally.

At less than 100 minutes the pacing is great. Movies have gotten longer than they ideally should be. This one jumps right in to the action and it doesn't linger around after the big finish. I'd love to see Bruce Willis and Mos Def reunite for another go. This time with a better script.