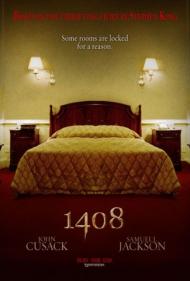 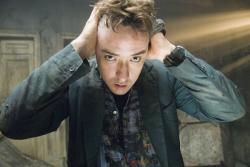 You have to wonder, what does Stephen King have against the hotel industry? Famously in The Shining, he showed how murderously creepy they can be, and now in 1408 he's at it again. Granted, hotel rooms are (as this movie points out) naturally creepy (next time you're lying in a hotel bed, try to imagine everyone who's ever slept there before you and some of the things they might have done while there), but I've certainly never experienced anything supernatural in one, unless you count that peculiar odor they all seem to have.

John Cusack stars as Mike Enslin, an author who specializes in chronicling haunted places around the country (His books have titles like, "The 10 Most Haunted Hotels"), despite the fact that he doesn't believe in the supernatural. His interest is peaked by a postcard from the Dolphin Hotel in New York City that says simply, "Don't enter 1408". Naturally, he does just that; forcing himself with the threat of legal action into the room where, supposedly, no one has ever lasted more than an hour. The Dolphin's manager, played in typical King style, by a wise old black man in the person of Samuel L. Jackson, warns Enslin that 57 people have died in that room since the hotel opened.

It doesn't take long for increasingly bizarre happenings to begin occurring once Enslin is ensconced in the room. Things start small with broken air conditioning, objects moving, and moving onwards to hallucinations and eventually seemingly transporting the entire room to one of the lower levels of hell. Perhaps most frightening of all is the clock radio, which plays the Carpenter's "We've only just begun", over and over. That would drive anyone insane.

Most of the movie takes place entirely inside the hotel room and to the filmmaker's credit, they manage to hold your interest and provide some real thrills despite, or perhaps because of, the limited set. However, I do wish that the previews hadn't given away quite so many of the scares. There are several moments that were completely spoiled by the trailer.

Along with the demons in the room, Enslin is also facing inner-demons, brought about by the death of his young daughter a while back. The few flashback scenes showing his daughter's death are the movie's weak points, filled as they are with heavy melodrama. When the little girl says, "Everybody dies daddy." You have to groan.

Overall though the movie is enjoyable and at an hour and thirty minutes, flies quickly by. If not for the presence of Cusack and Jackson however, you would be forgiven for thinking you're watching an episode of The Twilight Zone on the big screen, however. It certainly has that feel. And like that old TV show, you'll be just as well off watching this movie on the small screen, maybe to pass the time the next time you're staying in a hotel.

Although Scott found the daughter’s line groan inducing, she does play an integral role in the story. It is she who saves her father when he is at his most delusional. She comes to him like an angel defying the evil of the room. Her presence allows him to go on. The end, when he finds and plays the tape recorder for his wife is haunting, yet beautiful.

1408 was recommended by a friend. I was apprehensive as he loans me as many hits as misses. I was not completely into the film, but found myself thinking about it afterwards. The setting is cause for many questions, and the reason they give for not permanently closing up the room is weak.

The history of the room was fascinating, but the film does not give an explanation for why it is evil. The Shining explained that the haunted hotel was built near where the Donner party went cannibal many years before. Perhaps the book explains why Satan loves this particular hotel room, but the movie does not.

I also agree that hotel rooms can be scary in and of themselves. There is no way I would watch this movie while staying in one. That would be like showing Paul Greengrass’s United 93 on a flight over Pennsylvania.

Despite Eric's tendency towards inappropriate humor, I'm pretty much on the same page as both my brothers in regards to 1408. What I enjoyed most about it is the way it builds suspense. By the time Enslin is standing outside the door of the titular hotel room the movie has created such an air of eerie menace that I nearly had goosebumps in anticipation of what horrors were to come. Without relying on monsters and gore 1408 maintains this feeling throughout its run time. Here is a man trapped in a hell that is both a physical room and a state of mind.

John Cusack proves his mettle as an actor. He is in nearly every scene and is quite believable as a skeptic who makes his living exploiting other people's superstitions only to find himself face to face with paranormal activity he cannot dismiss. Samuel L. Jackson give his usual solid performance. He seems to be a good guy as he attempts to dissuade Enslin from staying in the room but as always there is something ineffable yet sinister about him. His best line is when he says, as only Sam Jackson can, this simple explanation to Enslin, “It's an evil fucking room.”

It's true they never give a concrete reason for the room's demonic atmosphere except for the traditional unlucky number 13, which shows up over and over again throughout the movie. The first death in the room occurred in 1912, add the individual numbers up and you get 13. The room number 1408 likewise adds up to 13, as do the numbers on the key lock 6214. The address given for the hotel is 2254 Lexington, another 13. And of course since the hotel doesn't have an official 13th floor, the floor room 1408 is on is actually 13. Even the postcard that first informs Enslin about the room says, “Don't enter 1408”, 9 letters and 4 digits equals 13. Finally, just to keep the motif going, the movie was released on June 22, 2007, yet another 13.

1408 isn't a great horror movie but it is far more intelligent than most examples of the genre. It creates a feeling of dread and maintains it right up till the end. I wasn't convinced that Enslin was really out of that room until the credtis rolled. And that's not an easy thing to do. And I agree with Scott about The Carpenters, "We've Only Just Begun", rarely has a pop song sounded so ominous.