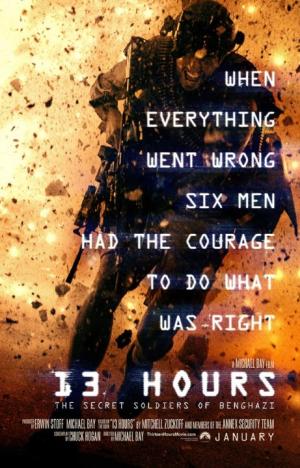 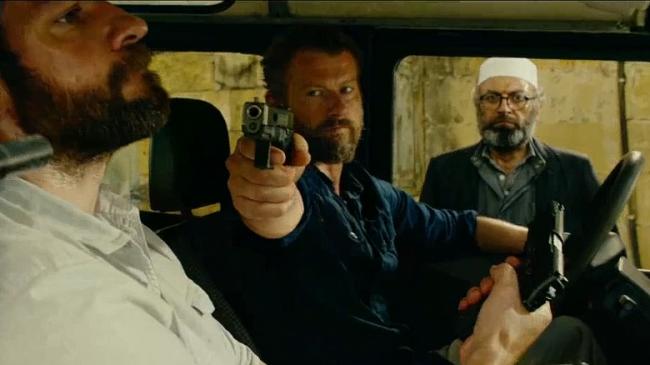 I have purposely avoided watching and reviewing 13 Hours because the subject pisses me off so much. My brothers constantly criticize my political rants in my reviews and I knew before watching this that this is a film that begs for it. So, without further adieu...

13 Hours recreates and depicts the attack on the U.S. Embassy Annex in Libya and a nearby "secret" CIA compound. The film makers built the Annex set to the exact specifications of the real one. The film is based on the book by Mitchell Zuckoff which was written by interviews with survivors. As accurate as Michael Bay tries to be, he merely touches on some of the politics that have caused much of the controversy surrounding this event.

We are first given a brief history of events of the overthrowing of Gaddafi and the fact that his armories were looted, allowing all kinds of weapons to fall into the hands of Jihadists. We then meet some former Navy Seals and Marines who now work as contractors defending the CIA compound and the Ambassador. One of the contractors asks why there are no uniformed Marines protecting him. We are then shown Ambassador Chris Stevens, who for some vague reason leaves the actual American Embassy and goes to stay at the Annex with a very small security force.

Suddenly a group of armed terrorists attack the annex. The local security forces flees, leaving a few Americans to protect the Ambassador. In real life, Obama, Hilary and others in his cabinet raced to the nearest microphone and told the American public that the attack was started by a mob that was angry over a You Tube video that had less hits than a makeup tutorial. There is one scene that takes place hours later where one contractor gets off the phone with his wife and tells the other contractors that it is being reported that the cause of the attack was the video. The other contractors look back at him with confusion and asks what he is talking about as none of them have heard of this. When later asked in a Senate Hearing about the prearranged lie for the attacks motive, Hillary famously yelled, "What difference at this point does it make!?"

During the attack on the annex, some of the contractors at the CIA compound gear up and decide to go to the rescue. They can see the smoke from the burning annex building. The CIA man in charge, whose name has been changed, tells them to wait. In a private interview, the real man in charge stated that he told them to wait but never used the term, "stand down" that was widely reported in the media. Does the exact wording actually matter? Anyway, the contractors eventually leave but get to the Annex too late. The building is ablaze and the Ambassador is nowhere to be found. He was last seen in the safe room with his body guards while the building was put on fire. Taking the surviving Americans, they return to the compound that quickly starts to resemble The Alamo.

There, they successfully fight off several waves of attacks but eventually take some serious casualties. While the soldiers defend from the roof, the CIA members below them work on destroying documents and information. The people below are college graduates with techy skills while the men on the roof are the grunts. The soldiers separate them as shooters and non-shooters.

We briefly get to know these war weathered veterans. Most are either married and/or have children. If you followed this story in the news, you know that some of the contractors died. I did not recall their names so I had no idea which of these men were going to make it out alive. This makes for a very riveting watch as these men often find themselves in extremely tense life or death situations.

13 Hours has been dismissed by some on the left as just a slam against Hillary's Presidential bid as it was released during an election year. Some on the right felt this movie did not hit her or Obama hard enough on their culpability. Neither are shown or even named in the film. In real life, President Obama was briefed on the attack before going to bed so he could be fresh for his fund raiser the next day in Las Vegas.

That lack of response has always been the big question mark surrounding the Benghazi attacks. Why did our government let this happen and then lie about it afterwards. Why was there no military help sent? A drone was overhead through most of it. Our government knew what was going on. In the same report I mentioned earlier, a group of American soldiers were ready to leave but it took hours for our State Department to debate about which uniform they should go in. Seriously. Look it up.

I do not care what political party you belong to, you have to be able to see that something was going on in Benghazi that has never been made public. One story claimed that it was prearranged for Stevens to just be kidnapped so as to have a prisoner exchange. If that is true, it explains the lax in security and lack of response. Another was that Stevens was involved with gun smuggling to Syria. Something Hillary would never want known and denied knowing anything about when asked in that same hearing. Like the Kennedy assassination, the truth is likely to never come out, because no one will ever be willing to admit to it.

13 Hours is an engrossing film that tells the true story of men who fought and died for a country whose government seemed to have no interest, for whatever reason, in even trying to help them. It may not tow the political line you walk but this movie is certainly food for thought.