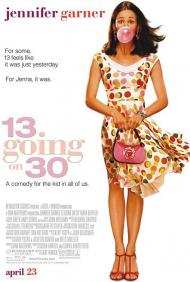 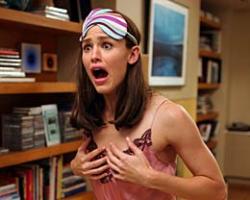 Comparing 13 Going on 30 to Big is just too obvious a way to begin (it is also an insult to all the people who produced Big), but it's the clearest way to show where 13 Going on 30 went wrong. Where Big was sweet, 13 is sappy. Where Big was funny, 13 is mildly amusing (sometimes). Where Big featured Tom Hanks giving one of the greatest comedic performances of his career, 13 features Jennifer Garner who comes across as plastic as ever.

The movie begins in 1987 with awkward and young Jenna Rink trying to get in good with the popular and bitchy girls at her school. Part of Jenna's problem is obvious. She's still drooling over Rick Springfield and his video for Jessie's Girl, even though the song was released six years earlier (or it could just be that the filmmakers don't have a clue about 80s music). When her 13th birthday party is a flop, she blames Matt, her geeky friend, and locks herself in her closet, wishing fervently that she were all grown-up. Luckily, for her, the dollhouse that Matt built as her birthday present contained wishing dust, and some of it falls on her head (isn't that always the way?).

Unlike Big, Jenna doesn't just turn into a grown-up, she wakes up in her Jennifer Garner 30 year old body, 17 years later, with no memory of the intervening years. This might have led to some funny moments (how does someone from the 80s deal with all the ways the world has changed?), but apart from being momentarily confused by the sound of her cell phone, Jenna has no problem or question about anything that's happened in the rest of the world since she was 13.

Jenna discovers that she has everything in life that she ever wanted. She's the editor of a Cosmopolitan-type magazine, which apparently is a job that a 13 year old can do, since she does it, lives in New York City, and is dating a New York Ranger. The one thing she doesn't have is her old friend Matt. The rest of the movie is glaringly predictable, and if you have problems predicting, don't worry, the movie telegraphs what's going to happen next well in advance.

There are a few good lines. "I don't want to be original. I want to be cool" and "Oh honey, those aren't people. They're models."

I'll be the first to admit that I am not a fan of Jennifer Garner. I always think 'plastic' whenever I see her. Judging by her popularity, I'm in the minority in my opinion of her however, and so fans of Garner might find more things to enjoy here than I did. Fans of good movies won't, but fans of Garner might.

The lesson Tom Hanks' character learned in Big, was that you should enjoy your childhood, your time will come to take up responsibility soon enough. It's good to be a kid. Not so here. Here we learn that the mistakes you make at 13 will haunt you for the rest of your life. That's a major difference in messages from what turns out, are two very different films after all. 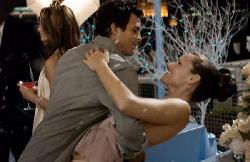 Mark Ruffalo and Jennifer Garner in 13 Going on 30.

They are two different movies indeed! 13 Going on 30 has more charm and innocence. Big has a 12-year old in a 30-year old body that has sex. There is just something wrong with that. Big does have better dramatic moments. However, 13 Going on 30 is by no means "...an insult to all the people who produced Big)," Imitation is the sincerest form of flattery.

Jennifer Garner is not, as Scott wrote, "...as plastic as ever." She is delightful and very engaging. She shows all the charm of Julia Roberts in Pretty Woman. Considering her role in Daredevil, Jennifer Garner can actually play roles that Julia Roberts can't. Her Jenna is sweet and sensitive. Hank's child in a man's body eventually obtains an adult attitude. Jenna retains her childish charm the entire movie.

As Scott wrote, this movie boasts some witty dialogue. Jenna quotes Pat Benatar songs when giving advice. "Love is a battlefield." She informs some teen girls. "I don't want to be original. I want to be cool;" a great line.

I am not sure what issues Scott has with Jennifer Garner, but I find her an amazingly charming screen actress. I hope she chooses to do many more romantic comedies.