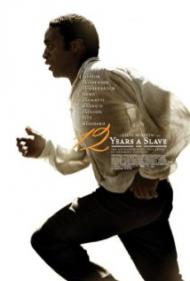 Chiwetel Ejiofor in 12 Years a Slave.

12 Years a Slave was based on the bestselling 1850's memoir by Solomon Northup. He was a free black man living with his family in upstate New York who was tricked into accompanying two white men to Washington D.C. on the pretext of a job and, once there, drugged and sold into slavery. He would spend the next dozen years living a life of hell in bondage in Louisiana, with no knowledge of or contact with his family.

Director Steve McQueen (Shame), working from a script by John Ridley, takes an unflinching look at America's greatest sin. Slavery nearly tore this nation apart and its repercussions are still rippling down through the generations. It is a difficult movie to watch. At times I cringed and almost had to avert my eyes. 12 Years a Slave forces the audience to take a long hard look at man's inhumanity to man. But it also shows the perseverance of the human spirit over unthinkable adversity.

McQueen is a brilliant filmmaker. He uses long closeups of his actor's faces that are haunting in their simplicity. Especially Chiwetel Ejiofor as Solomon Northup. In many scenes he expresses immense anguish with his face and eyes without uttering a word or even changing expression (see photo). He has to play dumb to survive. He cannot reveal the fact that he is an educated free man for fear of a savage beating. Surely his name will be on many awards' lists in a few months' time.

Perhaps even more impressive is the startling performance by Lupita Nyong'o. This is her American film debut and she learned she had the role just before graduating from Yale's School of Drama. She gives a performance of raging rawness. She plays a slave named Patsey who picks more cotton per day than any male slave on the plantation. Her master (a twisted sadist played by an intense Michael Fassbender) is obsessed with her. He rapes her. His wife, jealous of his attraction to Patsey, brutally mistreats her.

The most harrowing scene in the movie happens when Solomon is ordered at gun point to whip Patsey. Where most filmmakers would show the person doing the whipping and maybe include a shot of the face of the person being whipped, McQueen rotates the camera and shows us Patsey's back as the whip rends her flesh. Just as these slaves were shown no mercy, neither does McQueen to the audience. He forces us to look.

My one small issue with McQueen's direction is that he paints too idyllic a portrait of Solomon's pre-slavery life. It makes it seem as if racism didn't exist in 1840's New York, when history tells us differently. I understand the need to juxtapose his life before he was kidnapped and trafficked into slavery with the living hell it became after his abduction but it is perhaps slightly overdone. Not that it seriously mars the emotional impact of this brilliant film but as a critic I thought it worth pointing out.

12 Years a Slave takes the viewer along on one man's terrifying journey from the slave markets of our nation's capitol to the cotton fields of Louisiana. Throughout his ordeal Solomon never loses hope. When his liberty is at long last attained the audience experiences an overwhelming sense of relief. But then the viewer remembers that the nightmare of slavery might be over for this one person but that it will continue for another decade for the millions of others caught in its evil grip. In a word, powerful. 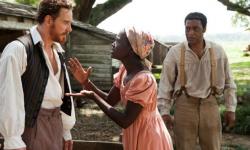 Not since Mel Gibson's Passion of the Christ has such brutality been depicted in a major motion picture. Like Patrick I found it difficult to watch at times. It is quite explicit in its violence. This gruesomeness, while shocking, is necessary. Let's face it, we've been shown violence in so many films that we've become immune to much of it. To really feel shocked by it, which is what we're meant to feel, McQueen must push the torture as far as he dares. He definitely makes his point, but this violence will assuredly prevent multiple-viewings. I know that this isn't a film I will ever want to see twice.

As Patrick wrote, it is based on the story of Solomon Northup. As with all Hollywood adaptations of books, things have been changed from page to screen. As an example, there's a scene early on in the film where a slave is killed on the ship that is transporting Solomon south. This scene was added for the film while in reality the only slave who died onboard was killed by smallpox, a disease that Solomon became afflicted with on the same journey, leaving his face scarred for life, which was also left out of the film. The book itself was written by a white abolitionist, as told to him by Solomon Northup. I don't write these things to call the central story into doubt, because it has been verified by historical records, but simply to make the point that just because it's about a sensitive subject doesn't mean that it is a documentary, and McQueen has altered it where he wanted to for dramatic effect (and to leave the face of his lead free of scars).

If the point of the film is to make audiences think about the historical issue of slavery, then it definitely succeeds. Interestingly though, it wasn't the brutality of Epps that struck me the most. Clearly, he was a psychopath and his wife was unhinged. Worse in my opinion was the attitude of William Ford, the "good" slave-owner, and his wife. These respectable slave owners who treated their slaves somewhat fairly, but who nevertheless have no problem treating their fellow human beings as chattel, are worse because they aren't psychopaths. These were completely sane, ordinary men and women who held life or death control over others by virtue of nothing more than the pigmentation of their skin. More chilling than Epps, if less physically damaging, is Mrs. Ford's retort to a crying slave woman who has just been separated from her children, to "calm down, you'll forget them in a few days."

The performances are, as Patrick wrote, superb. Ejiofor is terrific in the lead and made more remarkable by the fact that it's a very subdued performance that doesn't rely on hysterics or scenes of over-emoting. This is a man who clamps down his emotions, burying himself below the surface in an effort to survive, relying on the memory of his family and the hope of seeing them again to keep himself going. I likewise agree that Nyongo is award worthy as Patsey. I will be surprised if she doesn't walk away with the supporting actress award come Oscar night. Fassbender is also good as Epps. His is the most scenery chewing role though. Of the entire cast, Pitt seems the most miscast. Not because he does a bad job, but because he's such a big name and he appears in such a small role so late in the film that when he appears you are immediately struck by the thought that, "Hey, that's Brad Pitt!" and are taken momentarily out of the film.

Another hard to watch film was Spielberg's Schindler's List. Both this film and that one brutally depict a painful period of history that should never be forgotten. 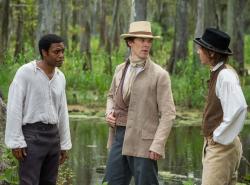 Sometimes we need a reminder of our history. The word, “slavery” is often reduced to something we heard mentioned in school when studying the American Civil War. We know in our minds and hearts that it is bad but we do not often want to spend much time thinking about it. 12 Years a Slave puts it right in front of our eyes and forces us to bear witness to how inhumane man is capable of being.

My brothers mentioned the violence in the film and it can be disturbing. Because these types of things happened and are portrayed so realistically here, it can be hard to watch. My wife was so bothered by the scene of Patsey getting whipped that she became angry with me for even watching it.

Although this is based on the story of Solomon Northup, it must be noted that it was actually written by an abolitionist white lawyer named David Wilson. Solomon Northup told him his story but it was the New York state legislator who put it on paper and had it published. It is still Northup’s story but they are sometimes Wilson’s words. Noah Berlatsky, writing for The Atlantic, noted that Northrups memoirs, “… refers to a slave rebel named Lew Cheney as "a shrewd, cunning negro, more intelligent than the generality of his race." That description would sound condescending and prejudiced if a white man wrote it. Which, of course, a white man named David Wilson did.”

As Scott mentioned, some things have been changed from page to screen. Northup did not witness Mrs. Epps physically abuse Patsey but according to his memoir she did offer him a reward if he killed her and buried her body in the swamp. Northrup’s memoir has no mention of him having sex what-so-ever, even though McQueen added a sexual encounter between him and another slave. Northrup has a remarkable story to tell whether it was manipulated by a ghost writer or a film maker.

Patrick mentioned the drastic difference from North and South as shown by McQueen to be unrealistic. I agree, but one early subtle scene is quite affective. After recently being made a slave, Solomon Northup is shown bathing while a slave boy is nearby. Northrup clearly has the body of a man who has not missed a meal, while the boy is extremely skinny and appears malnourished.

The cast is all good but as this is told from the perspective of a slave and a modern film maker, the plantation owners never become anything more than living breathing demons. Fassbender is a great actor but he has little to do beyond beat, rape, and scowl. He is like the Nazi commander of a concentration camp. We do not see him as human, nor do we even want to. It is easy to feel sympathy for the slaves, but it is far too complex to even glimpse into the heart and mind of people who dispense such cruelty.

Although it occasionally felt as if some modern sensibilities slipped into the script, I commend McQueen for not backing down. The constant use of the word, “nigger” is likely more off-putting today than it was in 1850. This is not a comfortable film to watch and it should not be. We live in a world where human trafficking still exists. We must never forget the past as it always repeats itself.