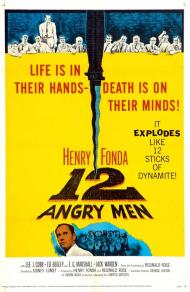 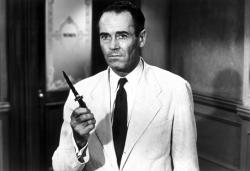 12 Angry Men is a fairly gripping drama even though it has long since passed its expiration date. But though some of the dialogue now sounds stilted the acting remains outstanding in every sense of the word.

With the exception of a few minutes at the beginning and end, the entire movie takes place in one room as the 12 members of a jury convene to decide the guilt or innocence of a Puerto Rican youth charged with the stabbing death of his father. Filmed in black & white and filled with talk, talk, talk, on the surface this sounds like one big yawn. The superb acting will keep your attention however, as the various jury members go over the evidence and face their own prejudices.

At first Juror #8 (Henry Fonda) is the lone hold-out against a guilty verdict, which will almost certainly mean the death penalty for the accused. With a calm demeanor and using logic he calls into question the evidence and witnesses testimony. Slowly he changes the other jurors minds as the tension and heat increase.

Originally aired as a live television drama in 1954, 12 Angry Men is definitely a product of its time. The attitudes and prejudices of the jurors seem quaint and naïve today. Lee J. Cobb and Ed Begley are immediately identifiable as the “bad guys". Henry Fonda is the hero and his arguments are a bit too pat and obvious. Still this all probably seemed gritty and realistic in the 1950's.

The real joy of this movie, that hasn't diminished at all, is the absolutely superlative acting. These dozen guys, with Sidney Lumet conducting, create an acting symphony, offering, as such, a 96 minute lesson on timing, line delivery, body language, facial expression etc.

Apparently the rest of the jury does not realize Fonda is the star, and thus always right.

Yes, this film is definitely a time capsule. The jury is made up entirely of white men. Each state in the union had it’s own laws on women on juries. The first time women served was in 1912, but women were allowed to option out of jury duty, in some states, up till the 1970s.

I recently got a jury summons and thought this would be a good time to review this movie. I was a juror on an armed robbery trial a few years back, and although there was some minor disagreements, the jury room never got as heated as the one in 12 Angry Men. However, it was interesting to note that jurors then were just as interested as getting it over with as they are today.

As Patrick wrote, the movie is all talking, and it is in the dialogue that the movie retains any relevance. Early on one juror says, “I just think he’s guilty. I thought is was obvious from the word “Go.” Nobody proved otherwise.” To which Fonda climbs on a pedestal and says, "Nobody has to prove otherwise. The burden of proof is on the prosecution. The defendant doesn’t even have to open his mouth. That’s in the constitution!”

The men argue and get abrasive with each other. “I beg pardon?” What are you so polite about?” One juror asks another, who retorts,” “For the same reason you are not. It’s the way I was brought up.”

My favorite line is when a juror, who has baseball tickets, asks another, “You a Yankee fan?” “No, Baltimore.” He answers. The other juror then remarks, “Baltimore? That’s like being hit in the head with a crow bar once a day.”

The acting is all very engrossing and the personalities of each character come to life quickly. The problem is that Fonda’s character solves everything just by thinking about it for a little while. Early in the movie he says that the accused has a lousy lawyer, and he is not kidding. Did that lawyer do any investigation before going to trial? 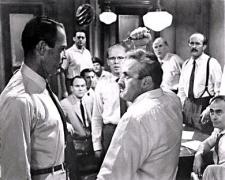 There is a definite stage play feeling to this movie, so much so that I can't help but feel it should have started when they entered the jury room and ended when they left it. We don't need the brief opening and closing scenes.

I rather think that Fonda's arguments being simple are kind of the point. I too have sat on a jury and there were a few members of my jury who were quite happy to side with whatever the majority vote was so they could just get out of there. One of them even said it out loud, "I don't think he's guilty but I don't want to be here all night, so if you guys think he is, I'll vote guilty." The point Fonda is making is that everyone just assumes the kid is guilty because they want to and because it's the path of least resistance. All Fonda does is make the jury slow down and think about the case; actually argue it out.

I'm kind of surprised you didn't mention Fonda's liberal "Society is to blame" rant, Eric. He goes off at one point about how this kid grew up in a slum and was hit every day, as if that justified murder.

The acting is well done as you both say. I think Lee J. Cobb is the highlight as the last guilty hold-out. Fonda is the star but he remains so calm and reasonable throughout the movie he almost isn't human. And Jack Warden provides some much needed comic relief as the Yankees fan.

One last thing that struck me is the good use of atmosphere. The heat, the rain, the cramped room with the broken fan (note how the room is cooled when the fan starts working when the lights are turned on) all help to create a claustrophobic and tense situation.

A movie that could be performed as a radio play with almost no loss of anything is a rare thing. This might just be the only movie that holds that distinction.