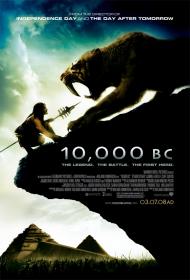 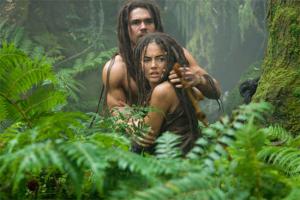 Better leave your brain at the door for this one.

10,000 BC is a direct lift from Apacolypto. In that film a young man living in a small village is forced to travel to the site of a pyramid and then save his lady love. The same plot exists here. Okay there is one small change. In Apacolypto the man has to race back to his village to save her and in 10,000 BC he races to a pyramid to save her, and instead of ancient Mexico, 10,000 BC takes place in ancient Egypt.

Writer/Director Roland Emmerich obviously has an affection for ancient Egypt. He also wrote Stargate. This film could almost play like a prequel to that film. In Stargate it was determined that the pyramids were built for an alien to land his space ship on. In 10,000 BC they are being built for a mysterious person always entirely covered in cloth. You never see his face. With minimal change he could have been Jaye Davidson’s character Ra.

Emmerich is the modern day Cecille B Demille, only without the sex and glamour. He likes the large spectacle films. Look at his list of credits and you see a man who loves using CGI to full affect. The problem he stumbles on is the lack of characterization. He seems so consumed with making the mammoths and the pyramids look good that he forgets that the movie is really nothing more than a love story/rescue film.

Strait is in nearly every scene and thus it falls to him to carry the film and keep the audience engaged. I liked Strait in The Covenant and Sky High, but here he is strapped with ridiculous plots and dialogue. In one scene he falls down a pit as it is filling with water. Also in the pit is a Sabre tooth tiger, who is about to drown as a tree has him pinned. Instead of just climbing out of the death trap, he approaches the tiger and says, “Do not eat me when I save your life!” He saves the tigers life and the tiger never eats him. Because, you know, wild animals work like that.

If you leave your brain at the door and distract yourself with plenty of snacks you may enjoy this movie for what it is: mindless eye candy. If you actually like your films to make sense, you will wish you stayed home and rented Apacolypto. 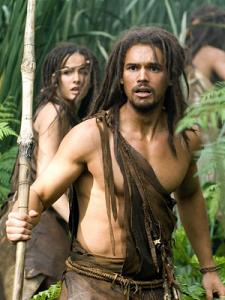 For Steven Strait fans only.

Yes, this movie has much in common with old DeMille epics. Although I concur with Eric that it lacks his glamour and sex appeal. It is historically anachronistic like DeMille often was. For example DeMille would have a Christian slave in ancient Babylon. Here we have ancient Egypt 5 or 6 thousand years before it actually began. I mean one doesn’t usually associate wooly mammoths and saber-toothed tigers with ancient Egypt.

As Eric said the visuals are decent and there is plenty of action, but a complete lack of character development. I did like the fact that the people of 10,000 B.C. are of many different races. Hollywood has traditionally made cave-man movies with all white casts. Still I couldn’t get over the fact that the movie clearly begins in the Stone Age and then, once the characters cross a mountain range and some jungle-like terrain, they wind up in ancient Egypt. It makes no sense whatsoever.

Even as brainless eye candy there are much better movies than this one. So unless you are a huge Steven Strait fan stay far away from this bomb. The only redeeming quality I can think of is if I am ever playing a game where I have to link Barbra Streisand to Steven Strait in as few movies as possible. Omar Sharif provides the narration here and he starred opposite Streisand in Funny Girl. 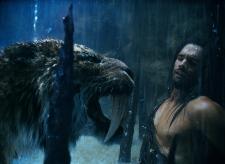 And the tiger remembers him? Seriously?

What's really stupid about the historical inaccuracies is that with a simple title change they would have made many of them ambiguous. Sure, you still wouldn't have had woolly mammoths helping to build the pyramids and Egypt was much more lush and green when they were built, but without a specific year, at least it would have been harder to pinpoint the errors precisely. The year also seems to place this movie clearly on Earth. If the filmmakers had placed the story in a fantasy world setting, then they could have just said, well that's the way it is on this world.

Just changing the title wouldn't have fixed all of the movie's plot holes. Besides the fact that all of the cavemen seem to wax and have their teeth checked up regularly, there are other problems as well. Dleh's father leaves their camp and eventually ends up in the desert with a tribe of people who speak a different language. When Dleh shows up later, a tribesmen speaks Dleh's language fluently. Now I'm sure if the tribesmen and Dleh's father became friends, the tribesmen might have learned a little bit of the language, but since Dleh's father was the one living with the tribe, doesn't it seem more likely that he would have learned to speak their language instead of the other way around? I only mention it as an example of some of the sloppy writing.

And I couldn't agree more Eric about the scene in the pit. Isn't Dleh a hunter? Isn't killing animals the thing he's been trained to do his entire life? And yet he pussies out and doesn't kill the tiger when he has the chance? And then the tiger remembers him later? What the fuck? I mean, seriously?

I tried to turn my brain off while watching this movie so that I could try to enjoy some of it, but even that didn't really work. Sure, some of it looks cool, but I never once gave a shit about anyone or anything in this movie. Frankly I didn't care at all if Dleh's people ended up as pyramid fodder or sabretooth tiger food. About the only thing I truly enjoyed about this movie is when it ended and I knew that I'd never have to watch it again.