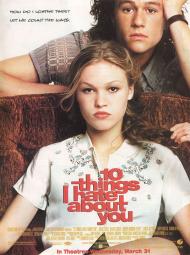 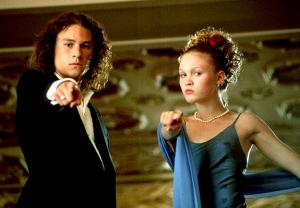 10 Things I hate About You is a modern telling of Shakespeare's The Taming of the Shrew. Only in this version Katarina is really not a shrew but simply a highschool girl with goals that have nothing to do with being popular or fitting into any clique. She insults the people who do but it hardly makes her the shrew that Shakespeare wrote about.

Katarina'a sister Bianca is little miss popular. The nice new guy at the school, Cameron, and the resident show off, Joey, each want to date her. One student, Patrick, questions her popularity with a great line, "What's up with this chick? She have beer flavored nipples?" Bianca's father, however, will not let her date until Katarina does. Both Cameron and Joey separately talk Patrick in dating Katarina. They pay him but eventually he, of course, falls in love with her.

Half way through, the movie runs out of jokes. Ms Perky disappears from the film and the jokes seem to take a back seat to the love story. The biggest problem though is that Katarina is really not a shrew. She is the only non superficial girl in the movie. Patrick really has no taming to do. At one point he sings Can't Take My Eyes Off Of You to Katarina on the bleachers in front of lots of students. Okay, Heath Ledger can sing okay but so what?

Julia Stiles and Ledger are decent in their roles but this movie loses it's momentum as soon as it switches it's focus onto the character's hearts instead of their smart ass mouths. 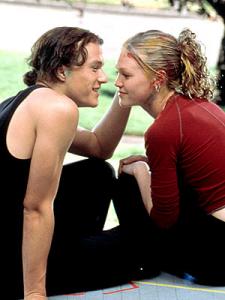 Heath Ledger and Julia Stiles in 10 Things I Hate About You.

Eric, the fact that Kat isn't really a shrew, but just a strong-minded individual might weaken comparisons to The Taming of the Shrew, but I don't see how it weakens the movie. If anything, it makes her more likable and you can actually see why Patrick would fall for her. It seems unfair to penalize this movie because it doesn't follow its source material completely.

Sure, the movie starts by featuring both students and teachers alike, but then shifts its focus almost entirely upon the students, but I don't think this hurts the story at all. The students are the story. I do agree that more scenes with Miss Perky would have been a good thing. I would also hardly say the movie runs out of jokes. I thought it was funny and charming all the way through.

The cast is more than decent. Ledger and Stiles both do great jobs as the leads (for both of them, this was a star making role), but the supporting cast is also terrific. Along with Joseph Gordon-Levitt and Larisa Oleynik as the other young couple and the aforementioned Allison Janney as Miss Perky, I also thought that Larry Miller was quite funny as the overprotective father.

Being a high-school romantic-comedy, I had to wonder how much I would be able to relate to it. Turns out, quite a lot. This one transcends its genre and entertains no matter what your age.

Sure, Kat isn't the shrew she was in the original, but then she wasn't in high-school in the original either. Just because it's different, doesn't make it bad. 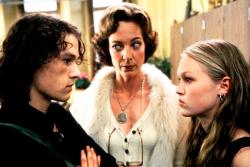 Heath Ledger, Allison Janney and Julia Stiles in 10 Things I Hate About You.

10 Things I Hate About You is very loosely based on Taming of the Shrew (although the titles do rhyme).  A few of the names are the same or similar to the ones used in the play (Petruchio becomes Patrick for example), the iconic bard gets quoted a few times and a girl keeps his picture in her locker. The famous quote the tagline parodies, however, wasn't even written by Shakespeare. “How do I love thee? Let me count the ways.” Is from a sonnet by Elizabeth Barrett Browning.

Regardless of its source material, 10 Things I Hate About You is a funny and romantic high school comedy. Two things stuck out in my mind while watching it. The first was how good this young cast of actors was. Heath Ledger, Julia Stiles, Joseph Gordon-Levitt and Gabrielle Union would all go on to successful careers. The second thing I noticed was that not a single person is shown using a cell phone. In my memory they were already quite common in 1999 but apparently they weren't yet the ubiquitous appendage they have since become. At any rate they hadn't yet been incorporated into everyday teen life as depicted in movie scripts.

There are some clever and amusing bits of dialogue. Check out this clueless exchange between Chastity and Bianca. Chastity: “I know you can be overwhelmed, and you can be underwhelmed, but can you ever just be whelmed?” Bianca: “I think you can in Europe.” Or how about the father's hilarious attempt to use modern slang? “I'm down, I've got the 411, and you are not going out and getting jiggy with some boy, I don't care how dope his ride is.” Ah, the 90s. It was a simpler time.

Heath Ledger and Julia Stiles make a sweet and believable teen couple. Their scenes together are the high points of the movie. Stiles has a great moment where she lists the things she “hates” about Ledger's Patrick. She suddenly tears up and runs from the classroom. I agree with Scott that the script's lack of faithfulness to the original play doesn't hurt the movie at all as entertainment. 10 Things I Hate About You is a decent little teen rom/com with a talented young cast that now has the added attraction of nostalgia on its side.