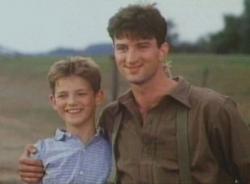 Some relationships are wrong no matter how you romanticize it.

American movies are not always shy about showing sex. However, other countries have made movies with sexual themes that Hollywood has never gone near, and for good reason. Foreign film makers are not scared to break taboo sex subjects. They have pushed sex on film past the point of good taste..

Oldboy (2003) from South Korea, is a dark film that covers the subject of incest. The American made, Little Boy Blue (1997) was shocking as teen boy Ryan Phillippe is forced to have sex with his mom. Oldboy has a man unknowingly begin a sexual relationship with his own grown biological daughter. It turns out that Phillippe's Mom was not his real mother, thankfully. In Oldboy this pervert cuts his own tongue out after learning the truth. It is a gesture that he will now never be able to tell his daughter that she is doing her father, as he intends to keep the sex going. He should have cut his fingers off as well in case he feels compelled to write his daughter a note stating how much he enjoys her body.

A film that only NAMBLA could support is For a Lost Soldier (1992), from the Netherlands. Voor een verlorn soldaat stars Jeroen Krabbe as a man who looks back at his youth during the end of World War II, when at the age of 12, he had a sexual love affair with a Canadian soldier. The sex is not merely implied, but obvious. How sick was everyone involved in this movie's production? I can just imagine the parents of the young actor, Maarten Smit, proudly watching him get hugged, kissed and sodomized (simulated) by an adult male actor. Smit would only make one other film so I hope his degenerate parents spent his money well. Jeroen Krabbe appeared in such hits as The Prince of Tides, The Living Daylights and The Fugitive. He did not need to make this film for the money. As a father of three sons, how did he bring himself to make this movie? No one with any integrity would appear in this crap.

The granddaddy of perverse films is Italian made Salo, or 120 days of Sodom (1975). Nine teen boys and nine teen girls are abducted and taken to a mansion in the countryside during World War II. At first they are merely the sexual objects for the adults and guards. Things soon get worse as the hetero/homosexual acts descend into depravity, violence and feces consumption. Eventually it becomes all out sexual torture and death. Unfortunately death comes only to the victims while the abusers live unscathed by their heinous acts. Director Pier Paolo Pasolini however, was murdered shortly after the release of this movie, in what is a still unsolved homicide.

In the American made I Spit on your Grave (1978) a woman is violently raped, and tortured, by several men for an extended amount of screen time. She is allowed to get revenge on them of course, which includes cutting one of their penis's off.

There have been sexual deviants in American films, but they almost always get what is coming to them. In foreign films it seems immoral or depraved sexual acts are treated as norm. The characters never come out any worse for their perversion, because in foreign films apparently, there are no perversions. According to so many of these foreign films, sex is natural and acceptable no matter how extreme and no matter who gets hurt.