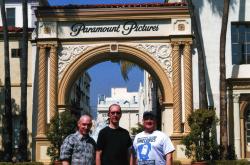 The Three Movie Buffs at the Paramount Gates

I can point to several things that first sparked my interest in old films. One of them was Sunset Blvd (1950). Patrick and I watched it late one night when we were both kids. We laughed at the outrageousness of this old has been actress still proudly waving to a parade that had long since passed. The one scene that always gets me is when her chauffeur, played by Erich Von Stroheim, drives her through the Paramount gates and she reprimands the guard for having the audacity to not recognize her. "Without me there wouldn't be any Paramount Studios." She proudly states.

When Scott suggested that the Three Movie Buffs tour a movie studio, it was a no brainer for me that it be Paramount. This was doubly so when Scott informed us that it is the only original movie studio still located in Hollywood. The idea of seeing the place where my fascination with old films started was too great of an opportunity to turn down.

When we arrived at the studio entrance, I was slightly disappointed. The gate Swanson pitches a fit at was not the one we went through. This one is bigger and more modern. I was concerned that the original gate was no longer there. Perhaps, I thought, it was on some side road entrance that no one uses anymore. Although still anxious to see the rest of the studio, that gate was somehow lodged in my mind as the holy grail of the tour.

After meeting our tour guide, our tour group went down a wide walk way that our guide told us was once the street in front of the studio. They had since bought the entire block in front of the studio and expanded. This explained the mystery of the famous Paramount gate. We soon learned that it is located off the original street where it still stands as the opening to the inner studios. When we approached it, our guide stated that he would take pictures of anyone in front of it if they wanted. I needed to hear nothing else. I quickly handed him my camera and he snapped the shot of the three of us in front of the gate.

This may sound silly, but that gate was quite symbolic for me. It stands as the representation of my entry into the magical, mysterious world of old Hollywood films. Besides Sunset Blvd, many other films and television shows have featured a movie studio with high walls and a guarded gate. To me they were like castles that housed famous people and made dreams come to life. Finally, I was about to enter into a kingdom I had only seen glimpses of on film.

As we entered through that gate, the tour guide said that it was considered good luck to touch the gate itself. Of course we all did. My first sight was of rows of buildings and narrow streets. It looked like a medieval town without the bricks. Scott pointed out a building that resembled the one Nancy Olson and William Holden worked in as writers in Sunset Blvd. Seconds later, our tour guide confirmed Scott's guess as correct.

We were shown the New York set where scenes are shot that take place in New York. Tom Cruise filmed some of Vanilla Sky (2001) there. My favorite part of that section was the Little Italy street where Francis Ford Copolla filmed Marlon Brando walking down some steps and being shot in a scene from The Godfather (1972).

We were shown a building that stood in for a South American hotel lobby where Harrison Ford met with Willem Dafoe in Clear and Present Danger (1994). We stopped by a sunken parking lot that can be flooded to film scenes that take place in water. It was a stand in for the ocean in Patriot Games (1992) for a high speed boat chase. It was where the crew of the Enterprise crashed a Klingon Bird of Prey to release two whales in Star Trek IV: The Voyage Home (1986) and The Truman Show (1998) used it as the fake lake where Jim Carey finds the truth.

We were given a bit of history by being shown where Edith Head's, Katharine Hepburn's and Lucille Ball's offices used to be. On Desi's old office is a door way that has been completely cemented in. According to our guide, Lucy had it done after they broke up as a message to Desi. I think she made her point very well.

I am not sure how we got on the subject, but at one point our tour guide mentioned that for the Wizard of Oz (1939), which was an MGM film, Buddy Ebson's original recordings of the Tin Man's songs, that Jack Haley performs in the movie, were used in the film. Scott and I knew this to not be true and what's more, knew that Patrick, who is a huge Wizard of Oz fan, knew this as well. I waited nervously for Patrick to correct our guide, but he kept his composure. A moment later, after the guide had moved a ways off, Patrick exhaled as if he had been struggling to control himself. He simply looked at Scott and I and said, "He is wrong, Jack Haley sang his own songs." I knew it was important for him to get that out.

Although I always knew that a movie studio produced a product and sold it to the public, I had always thought of it in more romantic terms, picturing beautiful women and distinguished men wearing refined clothes, spouting classic pieces of dialogue as a camera recorded it all to share with the world. The visit to the studio and seeing a set with all the lights and what nots, erased my fantasy land view of it. At one point I turned to Scott and said, "It's a factory."  This was made all the more clear when some stranger walked by with a plate of food that turned out to be Scott Baio on his lunch break.

When not flooded, this is a parking lot for studio employees.

Later, the three of us got stuck in traffic on Hollywood Blvd. Scott pointed out that something was being filmed just outside our car window. Patrick guessed that it was for a show called Hollywood Husbands. Kevin Hart and Romany Malco were filming a scene where they fight each other, while Chris Rock observed from behind the scenes. Instead of being star struck, as I probably would have been before, my first thought was instead, "It must suck to be at work on such a nice day."  As the traffic moved on, Scott asked if anyone thought to take a picture? It kind of seemed silly to me to take a photo of someone working.

Although I knew this before, it really did not sink in until that tour, that stars are just employees who deserve no more accolades than you or I. Perhaps that is why I enjoy the older stars so much. All I will ever know of them is their work and reputations. Paramount Studios is proud of its history and all of the stars who have passed through that gate. Each sound stage has a plaque that lists what shows or famous films were shot there. Every building on the lot is named after an old film star, such as Rudolph Valentino, Mary Pickford and Bob Hope. Even Gloria Swanson has one. It is just down a ways from Lucille Balls. I think Norma Desmond would approve. After all, without her there wouldn't be any Paramount Studio, at least that is how it will always play in my head.