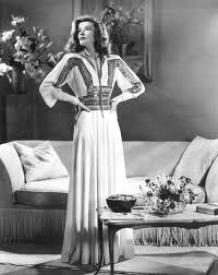 Katharine Hepburn was the quintessential movie star. She has a distinct, easily recognizable voice. Kate's amazing screen presence has no equal. Even in comparison to other larger than life celebrities, Katharine Hepburn's personal life was a tabloid's dream. Professionally, Hepburn was the consummate actress. Because her films are still with us her acting will always be alive. She did comedy as well as Carole Lombard and drama as well as Bette Davis. Although she had great acting range, almost all of her characters shared one quality. They are all strong willed.

In her best comedy, Bringing Up Baby, Hepburn played a love struck air head. Yet, her character, Susan, never wavered from pursuing Cary Grant's scientist. In perhaps her most memorable movie, The African Queen, Hepburn plays a naive spinster. Although she is a mild mannered missionary, she is still defiant enough to pour out all of Charlie's, (Humphrey Bogart) liquor. In Guess Who's Coming to Dinner, Hepburn's character stands up to her on screen husband, (Spencer Tracy) who is having doubts about his liberal thinking. In The Lion In Winter, she plays her strongest character on screen. As Queen Eleanor, Hepburn manipulates and arranges murder to get her way.

Hepburn was born to upper class liberal parents. Her father was a doctor who encouraged the, then untraditional, use of contraceptives. Her mother was a suffragette who supported equality for women. She discovered her brother's body after he had accidentally hung himself. Hepburn attended the all girl college of Bryn Mawr. She was married briefly before divorcing her husband to go to Hollywood. Due to Hepburn's desire to publicly wear pants, their were rumors, early in her career, that she was a lesbian. She had a much publicized affair with the eccentric Howard Hughes. Then, of course, their is her lengthy relationship with the married with children Spencer Tracy.

It is in this relationship that Hepburn is most interesting. Hepburn is considered to be an intellectual, no nonsense, independent woman. Much like Hillary Clinton, her relationship with her life partner contradicts all of that. Spencer Tracy often showed up at her door inebriated. Hepburn was just his chick on the side. Sure, he was the love of her life, but she allowed him to treat her like a whore. If Hepburn was not famous, she would have gone down in history as a chapter in Spencer Tracy's life. The chapter called, "His Mistress." Tracy, in fact, died while spending the night with Hepburn. According to her Autobiography, "Me", Hepburn herself made the awkward phone call to Tracy's wife to tell her that "Spence is dead." 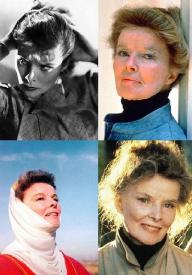 The greatness and the flaw of Hepburn are one and the same. She blazed her own path and thus is considered an original. Yet, with all that independence comes an air of arrogance. Hepburn often snubbed the academy award shows. Even when she made a rare appearance, she broke Oscar glamour tradition by wearing a turtle neck and slacks. In her hometown of Saybrook CT, she was loved, but her reputation was well known. She reportedly would scoop her own ice cream at a local parlor. At a butcher shop, she once went behind the counter and manned the slicer to show a butcher how to slice her meat.

No matter what anyone may think of Hepburn, there are two definites. She lived her life as she wanted to and on screen she left an unforgettable body of work. For her unparalleled work on film, the Three Movie Buffs salute Katharine Hepburn, the greatest female movie star of the 20th century.