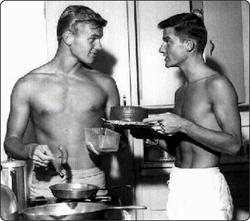 Gay love story Brokeback Mountain starred straight actors Jake Gyllenhaal and Heath Ledger. How careful was this casting made? Are there so few gay actors in Hollywood that none could be found? Unlikely. More sense is that two such famous "straight" actors would help attract more of an audience and distract, even slightly, from it being a "gay" movie. Or maybe gay actors were scared away from the project as playing a gay character would possibly out them.

One reason that actors remain reticent about being openly gay in Hollywood, even today, is that our society still looks down upon homosexuality. Just read the paper, watch the news or attend any Republican convention for examples. Gay bashing, and groups protesting equal rights for gays are still very common in our culture. Tabloids ACCUSE actors of being gay but have you ever heard of anyone being accused of being straight? Of course not. As long as this stigma continues it makes no sense for a Hollywood leading man, whose income and popularity depends completely on his projected image, to come out of the closet.

There have probably been gay actors in Hollywood since the dawn of film. Yet to this day they stay in the closet. 50 Years ago Hollywood was filled with closeted gay actors. The 1950's had such famous gay actors as Rock Hudson, Tab Hunter, Montgomery Clift and Anthony Perkins, who Hunter tells of having a two year relationship with in his autobiography. All of these actors played heterosexual roles and were considered matinee idols. Many young women of the time drooled over these actors not knowing that they would have a better shot of having sex with Mickey Mouse than with these men.

Surprisingly enough a few "gay" parts did exist in those days, such as Anthony Perkins dressed as his mother in Psycho. The most famous gay character from the time is that of Plato played by Sal Mineo who came out of the closet himself near the end of his career. The most telling moment in Rebel Without a Cause is when Plato first sees Jim, James Dean, in the mirror hanging in his locker. Plato stares with complete adoration and yes, sexual interest. Also of note is that Plato has a picture of actor Alan Ladd hanging in his locker, not a pinup of a woman. In 1965's Bus Riley’s Back in Town Michael Parks plays a sailor who comes home and is offered a job if he will sleep with the male boss. 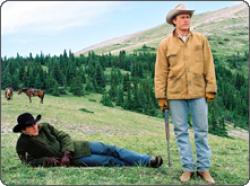 In the 1950’s homosexuality was not even talked about by the majority of the population. In some ways it was easier to be gay in Hollywood then. Everyone was assumed to be straight and unless you made some blatant statement to the contrary you were pretty much left alone. Today’s society has a very visible gay culture. To come out as gay today will automatically pigeonhole you in the mind’s of many people. And though many straight women have gay male friends, it is another thing for them to accept gay men in romantic leading man parts.

Ultimately as far as Brokeback Mountain is concerned it was important that straight actors played these roles. It is called ACTING after all, and it may help remove some of the stigma and stereotyping of gays. The love scenes would have lost some of their power with gay actors playing them. A major taboo was challenged. This may lead to more gay characters in mainstream movies being played by heterosexual actors. And why not? Gay actors have been playing straight characters since the dawn of movies.