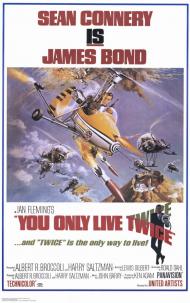 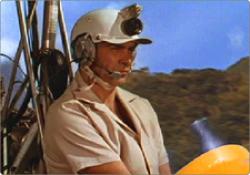 Sean Connery as James Bond in You Only Live Twice.

The movie opens with James getting killed. Of course it is a staged death and thus the title of the movie. The plot gets going with SPECTRE trying to start a war between Russia and the United States by capturing their space capsules while in orbit. The special effects showing this happen are pathetic. Bond goes about investigating who is behind it, getting laid and killing some bad guys along the way.

The movie is unique to the franchise in that the entire movie takes place in Japan. Bond is never shown anywhere else. However, the rest of the film is completely cliche ridden. The bad guy's lair blows up at the end. Bond fights a big blond henchmen. He ends up in a compromising position with a hottie.

All Bond movies require some extension of disbelief but this one is almost worth making fun of. On a Japanese island there is this old fishing village. So tight is this village that Bond is required to go through a marriage ceremony to be convincing that he is married to a local girl in order to search the island for anything suspicious. These people apparently pay close attention to those kinds of things. However, they must be completely blind when it comes to the fact that a monstrously huge complex was built near them. It employees hundreds of people. They must also be deaf in that a space rocket takes off every so often from it. You would think that one of these villager would have noticed a spaceship flying out of a nearby volcano.

Bond has one of his worst quips. After throwing a henchmen into a pool of piranha he stops, looks and says, "Bon appetit." Hey James, are you trying to stop a war or be funny?

Moore may have not been the best James Bond but he did make some better than this. 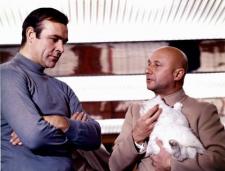 You Only Live Twice is where the James Bond franchise jumped the shark.

The big difference between this movie and the later Roger Moore films is that at least Roger Moore was in on the joke. He would cock an eyebrow at a particularly over-the-top scene and basically dare you to laugh at it. Whereas in this movie, poor Sean Connery tries to play it straight.

I lay the blame for this movie's shortcomings on its script, which was written by, of all people, Roald Dahl, the author of Charlie and the Chocolate Factory, whose flights of fancy obviously extend beyond confectionery. His script takes this movie for the first time beyond the levels of believability. Sure, the plots in the earlier Bond films were incredibly implausible, but they were at least possible. This time around the movie has gone deep into fantasy. I won't even call it Science Fiction, because there's very little science behind some of the things that happen in this movie. I mean, a rocket capsule that lands from orbit into a hollowed out volcano layer using some kind of retro-rockets? You don't have to spoof that, it's spoofing itself. Perhaps not coincidentally, this is the first of the James Bond movies where the plot from the book has been jettisoned completely. Only the location and a few of the names remain the same.

Of course the most unbelievable and frankly, just plain stupid part of the movie is having James Bond disguised as Japanese and getting married. First of all, tall Scottish Sean Connery as Japanese? And second, he gets "married" on a different island from the one he's going to, so why not just tell the people on the island he's going to that they are married. Why bother with the ceremony? Thirdly, why bother with the disguise at all? While disguised at the ninja school two different S.P.E.C.T.R.E. assassins try and kill him so obviously his cover is blown, why continue with the charade?

There are so many questions that the script never answers. Why do the Russians and the US keep sending up rockets knowing that they might disappear? Why don't they arm the rockets before they take off? Why don't the rockets try to maneuver away from the S.P.E.C.T.R.E. ship? Who edited the footage of Bond running into Tanaka's headquarters that they watch on television? When Bond is watching the helicopter carrying the car fly away on the monitor in the car, where are the cameras located that are filming it? Apart from giving a reason for the title, why does Bond pretend to die at the beginning of the movie? Why are M and Moneypenny dressed like sailors with their offices duplicated almost exactly on a submarine?

Even Sean Connery looks bored during the movie. He's starting to put on weight, none of the scenes of him without his shirt show anything lower than his chest. His gut is not to be seen, except when he's dressed and there's definitely more to it than there was just one movie earlier and much more than there was in Dr. No. Even his toupee looks a little flat in this one.

The reason for this sudden drop in quality of the Bond movies has to lie with the director and the sceenwriter. Terrance Young directed 3 of the first 4 Bond movies (all but Goldfinger) and Richard Maibaum had written all 4 of the previous movies and would go on to write several more including two of the best, On Her Majesty's Secret Service and For Your Eyes Only. Those two men are as much responsible for the success of James Bond as Sean Connery was. Both of them are absent from this one.

Unfortunately for the Bond series, this movie was still a box-office success and so the series would, apart from a few aberrations, continue in this vein for many years. You Only Live Twice is clearly where the James Bond franchise jumped the shark.

Does this man look Japanese?

As a casual fan of the series the more implausible plot devices didn’t bother me much. The details of Bond’s missions are never as important as the ride he takes us on accomplishing them. This rollercoaster plot moves at a very fast pace. It seems to be one action sequence after another until it almost becomes too much.

I can say that after recently watching Roger Moore in Live and Let Die and George Lazenby in On Her Majesty’s Secret Service, I appreciated Sean Connery more than ever. This may not be his finest hour as 007 (although it is arguably his campiest) but he still brings a greater depth to the character (with just a look) than either of those actors ever managed to.

There are comparatively few talking scenes in this one. As I said before it is nearly all action. The story catches its breath only a few times. One is for Q who gets a good scene as he goes into the field this time to demonstrate new gadgets for Bond. There is also a Japanese counterpart to him.

Bond being made up to look Japanese is an embarrassment. It is patently ridiculous and absolutely unnecessary. If this was Roald Dahl’s idea he should have stuck to writing children’s books. However if he was responsible for the more outlandish and campy aspects of this movie then I applaud him for keeping the franchise from taking itself too seriously.

There was one particular action set piece that I truly enjoyed. It is where Bond and the Japanese woman go to search a warehouse. They are soon surrounded by goons. Bond gallantly lets the woman get away to safety and then heads up to the roof of the building. In a long tracking shot he runs across the roof fighting dozens of bad guys while an instrumental track of the theme song plays. Bond eventually gets away and just as he cockily adjusts his tie he is knocked out from behind.

You Only Live Twice may be where the Bond series first “Jumped the Shark” but it entertained me. Sure the first four Bond movies are in a league of their own but there is a place for the more outrageous and silly Bond which, as Scott said, often seems to be spoofing itself. You Only Live Twice is spectacularly cheesy and I thoroughly enjoyed it.