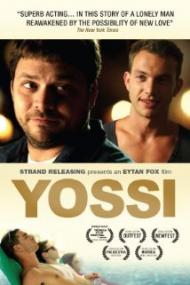 Ten years after first introducing him in Yossi & Jagger, director Eytan Fox revisits Dr. Yossi Gutmann in Yossi. Although at first it seems hard to believe that ten years have gone by so quickly, one look at actor Ohad Knoller and this truth will become self-evident. He has gained at least thirty pounds and his face looks jowly and haggard. All of which suits the character.

One day he recognizes a patient as his dead lover Jagger's mother. He insists on treating her. She thinks he looks familiar but can't place him. He gives her a ride home and she tells him about her son and even shows him a photo. Obsessed with the idea, he eventually gets up the nerve to visit her and he bares his soul, telling both of Jagger's parents the truth about the relationship he had with their son. He goes into detail about Jagger's death, telling them how he kissed him goodbye in front of the other soldiers. I won't give away how Jagger's parents react to this news.

Yossi is such a morose and lonely man. He is insecure about his body and doesn't like being touched or looked at. Ohad Knoller really captures a sense of self-imposed isolation. I don't want to give away too much but a chance encounter with a group of young soldiers will change Yossi forever by reawakening him to the wonders of life and love. The ending might be a fantasy but it is a welcome conclusion for a screen character that has suffered more than enough.

Like the first movie it runs less than ninety minutes. Yossi tells its story quickly and without any undue dramatics. It starts out quite depressing but changes gears quickly during the second half. Yossi might not achieve the heights of romance and tragedy found in Yossi & Jagger, but it does provide a satisfying denouement for the character of Dr. Yossi Gutmann.

The running time may be brief but the pace is quite slow. Any longer of a running time would have possibly induced sleep. There is more of a mood here than an actual plot.

Eytan Fox is good at little moments that say a lot. When Yossi visits the arrogant stud for sex, the stud is put off by Yossi not being as young and attractive as the picture he sent. He is not at all into Yossi, but says to him, "...since you’re here, how about going down on me and calling it a night.” The camera then shows Yossi put his glass of wine down with a complete look of shame on his face before cutting away. Did he or didn’t he?

Another moment is the one Patrick mentioned where Yossi tells Jagger’s parents about Jagger’s last moments on this earth. They look stunned and the shocked mother says to Yossi, “You didn’t drink your coffee.”

When Yossi gives Tom and the other soldiers a ride, Yossi is playing a cd in his car that none of the soldiers recognize except Tom. After Tom corrects the other soldier that it is Gustav Mahler and not “Miller” Yossi and Tom stare at each other in the mirror. Later when Tom joins Yossi at a night club, the performer on the stage sings “I want to embrace you” just as Tom sits down at Yossi’s table.

Ohad Knoller does a great job as the lonely Yossi, buried in his grief. He spends much of the time walking about as if life itself is crushing down on him. He carries the weight of his sexuality like he carries his expanded waist line. Shedding both the physical weight and the secret of his sexuality would erase much of his stress.

In that I found the weakest aspect of this movie. I do not understand why Yossi does not come out of the closet. He has few friends to lose. The girl at work who likes him would back off. Likewise we never get to know Tom. He seems very comfortable in his own skin. His fellow soldiers know he is gay and accept him.

Tom is exactly what Yossi needs but other than Tom telling Yossi that he is not stupid, we are never told what Tom sees in Yossi. At one point Tom tells Yossi that his parents do not know he is gay, but that is as personal as it gets. Eytan Fox is good at the small moments but we needed that big moment where Yossi breaks down and tells Tom of his past with Jagger. It would have been cathartic for Yossi as well as a great ending for us. However, all we get are the two actors wearing pensive smiles. 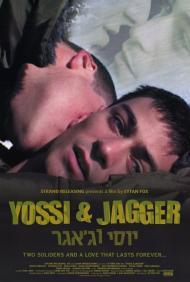