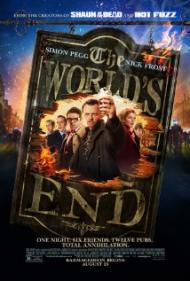 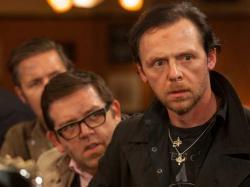 Nick Frost and Simon Pegg in The World's End.

The World's End is the third film from director Edgar Wright with stars Simon Pegg and Nick Frost. It follows their earlier collaborations, Shaun of the Dead and Hot Fuzz. The three of them return with their trademark comedy and ensemble cast of actors for one of the most enjoyable films of the summer.

Pegg stars as Gary King, a ne'er-do-well whose life peaked as a teenager when he was the leader of a group of friends in their small hometown of Newton Haven. In an attempt to recapture some of that lost youth, Gary arranges a reunion of the old gang with the intent of returning to their hometown and reliving what he considers the happiest night of his life when they attempted an epic pub crawl, starting with The First Post and traveling through a total of 12 pubs, ending at The World's End. Naturally things don't go to plan only they go wrong to a stranger degree than expected when it turns out that the old home town has become the epicenter of an alien invasion and most of the population of the village has been replaced Stepford Wife style by robots. This leads to comic mayhem and the odd emotional moment or two as the gang tries to complete their quest and possibly even save the earth at the same time.

A big selling point for these movies has always been the camaraderie between Pegg and Frost. Close friends in real life, their chemistry carries over to the screen quite easily even at the beginning of the film when the two of them are at odds with each other. This time they are joined more prominently by several bit players from their earlier films. Martin Freeman and Paddy Considine return from small parts in earlier Wright/Pegg films as full-fledged supporting members of this oddball gang of old friends. The script cleverly gives them all courtly surnames to emphasize the quest nature of the evening.

There are also several Easter eggs scattered throughout the film that will reward close-eyed viewers and longtime fans of the trio of filmmakers. Actors from their earlier works appear in cameo moments and once again a former Bond actor plays a small part.

The humor in the film builds as the characters progress through their quest. The drunker they get, the funnier the film becomes. Gary is a sad character who starts as rather annoying, but as the alcohol loosens the men up, he becomes slightly more sympathetic. As in their earlier films, there is a moment or two of serious emotion. In this film it comes near the climax when we learn just how far Gary has fallen. These moments never work as well as the comedy, but this one works better than the similar moments in Shaun of the Dead and Hot Fuzz.

There are also a few touches of social commentary thrown into the story, although only in a very minor way. Several jokes are aimed at the homogenization and franchise nature of pubs and restaurants and humanity in general as the pubs and the people in Newton Haven have now all become depressingly similar to each other.

Thankfully though, this is not a movie to be taken overly seriously. The comedy is always front and center ahead of everything else. Although Wright, Pegg and Frost are calling this the third and final film in their Blood and Ice Cream trilogy, I only hope that it isn't the last time they all work together. Each of them has found solo success, but there's something magical that happens when they all work together. 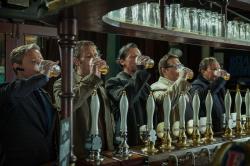 While I'm not the huge fan of Wright, Pegg and Frost that my brother Scott is, I still thoroughly enjoyed this movie. As a beer drinker I could definitely relate to the pub crawl. Also being roughly the same age as the guys in the movie enhanced for me the nostalgia of trying to relive a treasured moment from our youth. I was quite caught up in the idea of these five middle-aged blokes attempting to finish something they failed to do as teenagers.

The movie worked best for me during the first 30-40 minutes. I really enjoyed getting to know these guys and watching them figure out how to relate as friends who haven't seen much of each other in over a decade. Of course without the whole alien invasion angle it wouldn't have fit in with their Blood and Ice Cream Trilogy at all, but in my opinion it wasn't needed.

I agree with Scott that the relationship between Gary and Andy provides the film its heart and they are likewise a very funny duo. In a movie with plenty of amusing lines, Simon Pegg gets the lion's share of them. These range from him asking in a perplexed and exasperated tone, “What the fuck does WTF mean?” to this most gentlemanly speech, “Tonight, we will be partaking of a liquid - as we wind our way up the golden mile commencing with an inaugural tankard in The First Post, then on to The Old Familiar - The Good Companion, The Trusty Servant, The Two-headed Dog, The Mermaid, The Beehive, The King's Head, and The Hole In The Wall for a measure of the same. All before the last bittersweet pint in that most fateful, The World's End. Leave a light on good ladies, although we may return with a twinkle in our eyes, we will be in truth blind – drunk.”

As the pints get downed and the gang gets steadily drunker the movie gets steadily sillier and more outrageous. The ending, while not a total letdown, is the weakest aspect of the movie. I would have preferred a slightly less ridiculous outcome but then, as I said before, it wouldn't have fit in the trilogy at all. Still, when all is said and done, I liked this movie more than either Shaun of the Dead or Hot Fuzz. I would love to see these guys team up for a slightly more realistic slice-of-life comedy next time around. 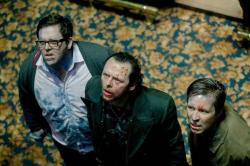 Nick Frost, Simon Pegg and Paddy Considine getting lectured on how they should get along with other species in The World's End.

I am likewise not the fan of Pegg and Frost that Scott is. In fact, I think he is quite biased in his opinion of them. Both actors have a certain amount of comic charm and their man/child shtick works well for them, yet I found little genuine humor here. Even Scott failed to mention in his review a specifically funny scene or joke.

I found some moments to be mildly amusing, such as the line Patrick quoted that Pegg says to a woman at their Inn. However, I never laughed out loud. I also agree with Patrick that the best moments happen before they discover the presence of “robots” (a running joke that runs out of steam long before it stops running).

I enjoyed the dramatic moments. Gary King is a sad middle aged man whose life peaked in high school. I know several people whose life did the same. He is a miserable but real person. His desperate attempt to recapture the moment that he had the world by the balls is more poignant than funny. Again agreeing with Patrick, I enjoyed watching these men’s lives being discussed and compared. None are completely happy and that leads us to the point of the film.

Scott wrote, “There are also a few touches of social commentary thrown into the story, although only in a very minor way.” He pointed to the homogenization of pubs and humanity in general. It is not a minor commentary. It is the glaring theme of the story. Except for Gary, all of the guys have become acceptable members of society with their jobs and careers. They represent the homogenization of man growing up and becoming what society expects of them. Gary meanwhile refuses to grow up. As the movie progresses we see that the men who became what society expected are not all happy about it, while we start to see that Gary is, in fact, the happiest of the lot.

The ending clinches the point of the commentary with a lecture from the alien about conforming to standards that they have created. Gary, the non-conformist, is the clear cut hero. Disagreeing with someone else’s expectations has been his life’s motto. Thus the moral of the story is that it is okay to create your own goals, even if others think less of them. After all, your happiness is your business and you never know when aliens with goals of assimilation may attack. 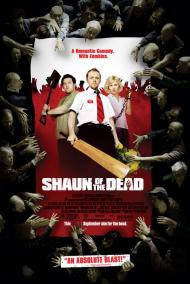 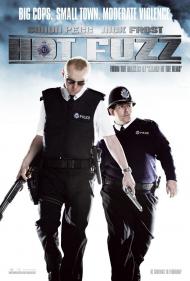