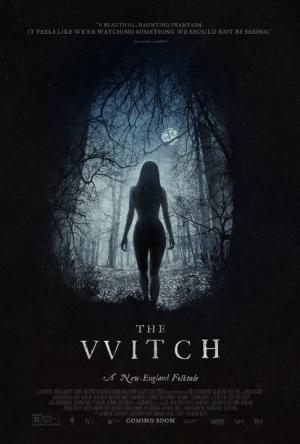 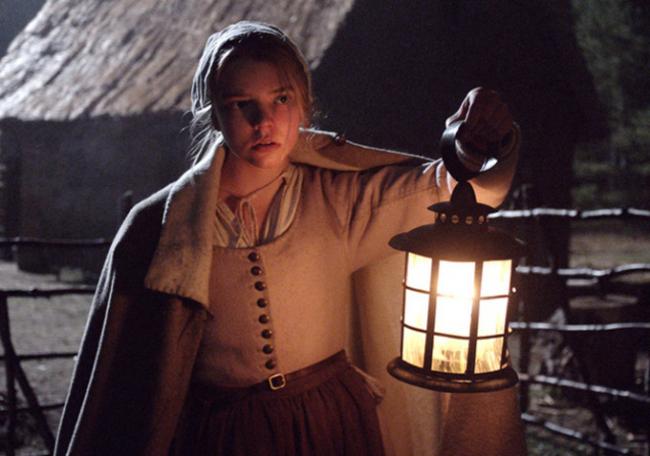 Anya Taylor-Joy in The Witch.

The film is set sometime during the 17th century in Puritan New England. When the film begins, William and his family are expelled from a Puritan plantation over an argument of religious belief. He, his wife Katherine, oldest daughter Thomasin, son Caleb, and a pair of twins, Mercy and Jonas, build a house in isolation on a field near a forest. A few months later and they've got a farm going and a new born son. The farm doesn't flourish and even worse catastrophe strikes when Samuel is kidnapped by a witch who lives in the woods. In a creepy and bloody scene she kills the baby and rubs his blood all over herself in some sort of youthening ritual. As further strange occurrences and bad omens happen around the farm, tensions grow and the children start to accuse each other of witchcraft, which disturbs their deeply religious parents greatly.

Robert Eggers makes his directorial debut with his own script. Although produced on a modest budget of just $3.5 million, the film looks great, with attention carefully paid to period detail. The costumes, the production design, and the stiff, formal dialogue all add to the sense of realism. The lighting is natural, with much of it by candlelight and the rest under a gloomy and overcast sky. Because of the limited budget and the tax incentives offered by Canada, the film was shot there rather than New England, but the remote location and the weather there works to enhance the mood of the film. The film made its debut at Sundance in 2015 where Eggers won the Best Director award for Dramatic Film.

The cast is quite small and made up mainly of just the actors playing the family. They all do good work, but Anya Taylor-Joy is most likely to receive a career boost from her part as young Thomasin. She's at the center of the story and handles a range of emotion. But there's not a bad performance in the bunch. Ralph Ineson is sympathetic as the father trying to support his family, even if his religious beliefs seem extreme from today's standards. And Harvey Scrimshaw matches his on-screen sister as oldest son Caleb.

Although there are some genuine scares and even some gore, the best thing this movie does is convey a consistent sense of creepiness. There are several scenes that will make you genuinely uncomfortable. Even the quiet scenes carry the sense of oppressiveness that permeates the entire film. The other thing the film does so well is keep you wondering just how it will end. Most horror movies are easily predictable, but here's one where I really didn't know how it would all turn out. 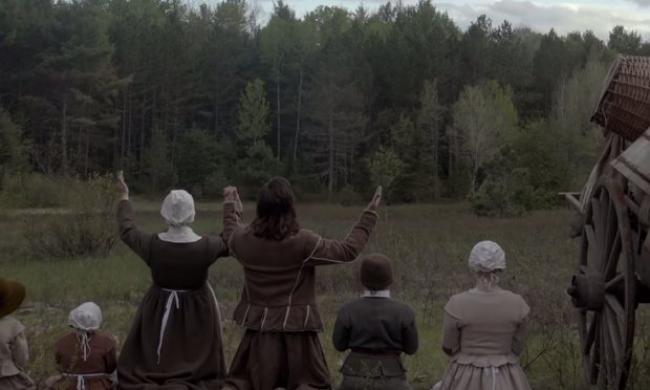 The Witch is a minor little horror masterpiece. It's a tale of evil that grows ever more grotesque and creepy as it unfolds, leading up to a stunning final scene. The realness and authenticity of the movie's setting is impressively rendered. It vividly depicts farm life in seventeenth century New England. In this wilderness it was all a man could do to scratch out a meager subsistence for his family. But in The Witch he also has to worry about supernatural forces of evil lurking in the surrounding woods.

The Witch is definitely an original film, although it's based on centuries old folktales. It's the type of story best told around campfires. It contains a few shocking moments but, as Scott wrote, this isn't your typical predictable horror movie. It rarely goes for the obvious scare. It makes you think as well as react on a visceral level. The line “Wouldst thou like to live deliciously?” is spoken during one of the creepiest scenes I've ever had the pleasure of sitting through.

The cast does a terrific job. I too was impressed with all of the performances. Even the very young actors playing the twins are note perfect throughout. Anya Taylor-Joy could very well be on her way to movie stardom. She already has one classic film on her resume. A superb cast, wonderful cinematography and one hell of a scary story combine to make The Witch not only the first must-see movie of 2016 but also the first truly great movie of the year. 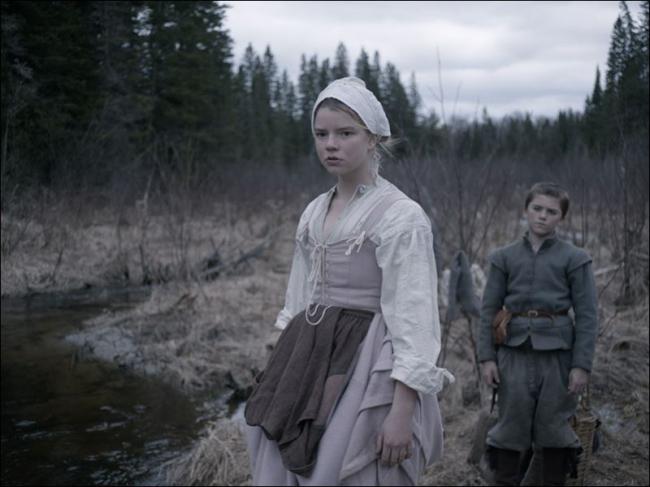 Anya Taylor-Joy and Harvey Scrimshaw in The Witch

My son and I went to see a movie yesterday with our options being Race or The Witch. Based on my brother's glowing reviews, I talked my son into seeing The Witch. A decision we both regretted. As we left the theater I sincerely wondered whether I had just watched the same movie that Scott and Patrick had reviewed.

Yes, the atmosphere is there and the production looks good, even though a couple of scenes clearly mark it made on the cheap. However, so many questions never get answered that I lost interest. Why were they kicked out of their community exactly? This family seems pious enough for any Puritan settlement. The witch may very well have bathed in the baby's blood to make her youthful but that is just a theory of Scott's. The last we see of the naked baby is the witch holding his penis and a knife pointed at it. What was that about? Caleb comes home from the witch's lair naked and scratched up. What happened to him? I am guessing something sexual as the witch's cleavage and her kiss drew him in, but again, that is just an assumption. Worse yet, is why does the witch mess with this family at all? Is the family living too close to her home? Is she simply bored? Because they are outside of the community are they just an easy target? I know, it is the classic, "The devil made me do it." excuse. Either way, this resourceful family should have packed up and moved at the first sign of trouble.

I will agree with my brothers that the cast is all very efficient in their roles, even if they are playing stereotypical close minded religious pioneers. As a drama the film works. The father is very patriarchal, controlling everything the family does from where and how they will live, what to spend their money on and being the first to break bread, that his wife made, and pass the plate around as if it were a gift from him and God. The mother regrets their choices. Caleb has started to have sexual urges. He keeps staring at his sisters breasts. Hey, there aren't any other girls around. Thomasin has a short temper with her younger brother and sister who only seem to be around to annoy her. These are real enough characters but I wish there accents had not been so strong. Several times I had a hard time understanding the dialog.

The Witch has been endorsed by Satan worshipers and I understand why. These religious Puritan zealots spend the entire time talking about how each of them and themselves are living in sin. The movie opens with Thomasin confessing in prayer to such sinful acts as missing her prayers. These people easily suspect each other of witchcraft and their faith in God proves quite simply to have been a waste of time. However, if you believe in and worship Satan, you can do amazing things.

And there is another rub. If a film depicts a devil or the power of the devil at work then it is likewise confirming the existence of God. You cannot have yin without a yang. So within the context of this film, the devil is free to walk the earth and use women for his bidding but God is nowhere to be seen or heard from? This family practically lives every moment of their lives praising and serving him yet he never makes an appearance, not even when they need him most to help them fight against powers they have no means to defend themselves against. Yeah, it is easy to see why The Satanic Temple has officially endorsed The Witch as "a Satanic experience" as the only people who benefit, in this film, from worshiping a higher power are the succubus.

The Witch has its moments of eeriness but is not at all a truly great, must see movie. We should have seen Race instead.