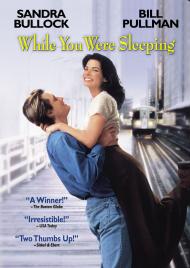 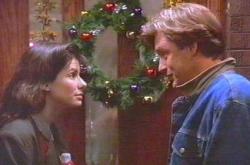 Sandra Bullock and Bill Pullman in While You Were Sleeping

In 1994, Sandra Bullock joined the “A” list with the blockbuster Speed. One year later she proved her star power by getting top billing in While You Were Sleeping. It made more than four times its budget in its initial USA theatrical release alone. Many actresses were considered for the role of Lucy but thankfully none of them got it as Bullock is the charming center of this family holiday film.

It opens with Lucy narrating about how she misses her parents and we soon find out that, although she has friends, she is quite lonely. She works at a token booth for the Chicago L-train. She fantasizes about a well-dressed man, Peter, who passes daily by her booth. One day he falls from the platform and onto the tracks. Lucy saves his life but Peter ends up hospitalized in a coma.

There, Peter’s family mistakes Lucy as Peter’s fiancé. It is the first of two moments that require some suspension of disbelief. Peter’s family is very accepting of Lucy and Lucy is so in need of a family that they take to each other right away. Whereas Lucy’s affection for Peter is imagined, her affection for his family becomes very sincere as she gets to know them, especially for Peter’s brother, Jack.

As Lucy looks inside Peter’s wallet and visits his upscale apartment, we see what an arrogant and shallow person he is. Who has pictures of themselves in their own wallet? Jack is more down to earth and easily a better match for Lucy. They fall in love but as she is believed to be his brother’s fiancé, they hold their feelings in, barely.  Of course we know where everything is headed but we want very much to see how Lucy gets herself out of this situation.

While You Were Sleeping has charm in spades. Taking place from Christmas to New Years, the movie twinkles with festive lights and holiday decorations. A lonely woman, who desperately misses her father, finds herself in the middle of a likable family as if Santa Claus gave her exactly what she asked for.

The second time we must suspend our sense of reality is when Peter wakens from his coma. I will not give away details as it is the scene we have been waiting for. How Peter reacts does not make sense if you think too much about it. If you can surrender yourself to the fantasy of it all you will enjoy it a lot more.

Although this is a romantic comedy, it is more romantic than funny. After telling her boss about her problem, he responds, “You're born into a family. You do not join them like you do the Marines.” Yeah, that is about as funny as it gets. This story of family and love may not make you laugh out loud but it will cast a holiday spell over you.

Bullock is the clear cut star here and the success of this film made her Julia Roberts biggest rival at the time. Her girl next door with model looks image is very appealing, no matter how unrealistic. She is unthreatening and oh so pleasant. The fact that her only suitor is the landlord’s, Joe Pesci wannabe, son, is hardly realistic. There should be a mile long line of men waiting to ask this low maintenance beauty out.

While You Were Sleeping celebrates love and the need we all have for it. Christmas can heighten our sense of family and nostalgia. This movie feeds on those emotions and satisfies them completely. If you can excuse its flaws you will enjoy this light hearted, warm holiday treat. 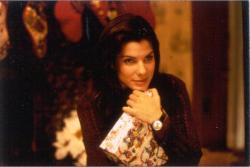 Sandra Bullock in While You Were Sleeping.

I agree with Eric that the movie does have a few easily forgivable flaws. Those are mainly related to the more implausible elements of the plot. Lucy's insertion into and acceptance by the Callaghan family is done cutely, but doesn't bear close scrutiny. Likewise, Peter's reaction upon waking from the coma, as Eric wrote, does require some suspension of disbelief by the audience. However, this is such a charming, light hearted, little bauble of a movie, that forgiving those moments is quite easy.

The heart of the film's charm is Sandra Bullock. Her accessible beauty and sweet personality make her the perfect romantic comedy lead. She is unthreatening to women and appealing to men. I agree with Eric that her absence of other romantic interests is another implausible element, but then the movie does explain that until the year before she had been taking care of her ailing father, which might have left her little time for a boyfriend. And also, I don't think the script is suggesting that she is a virgin or inexperienced. It just doesn't mention her previous romances.

The Callaghan family as a whole is an important part of the story because as Eric said, family and nostalgia play a big part of this film. Lucy falls in love with the whole family and not just Jack or Peter. That it should happen at Christmas time is perfetly apt. A longing for the familiar and the comfortable is always strongest at that time of year and those searching for such things will find it in this movie.

Glynis Johns in While You Were Sleeping.

There's some festive charm to be found in While You Were Sleeping but I was far less enamored of it than my brothers. The initial mistaken identity set-up is straight out of an old screwball comedy, but unfortunately, as Eric noted, this is no screwball comedy. Sure the supporting cast provides some laughs but the central romantic relationship between Bullock and Pullman is practically devoid of humor, and the romance aspect is pretty dull and listless as well.

I suppose if you are a big fan of Sandra Bullock then you will enjoy this movie more than I did. Scott wrote that as an actress, Bullock doesn't threaten women and appeals to men. He should have specified straight men, since I don't know a single gay man who loves her. She is perky and spunky and down to earth but I also find her woe-is-me shtick to be annoying. It isn't enough that she's pretty and has a great personality, she wants us to feel sorry for her too.

As for Bill Pullman, he has to be one of the dullest leading men in history. I never really liked Jack. He's written to be a bit too wishy-washy for my tastes. And the subplot of him leaving his father's company to go into business for himself is unnecessary and slows down this already slowly paced movie.

I also didn't think the Joe Jr. character was funny. He's such a one note stereotype, and the scenes where Jack misunderstands what's going on between Lucy and her landlord's son seem very contrived. And how the hell did this great family produce such a vain arrogant asshole as Peter? And everyone in the family so easily buys that he and Lucy fell in love, even knowing she isn't like any woman he has ever dated before.

What I did like about the movie is the old folks. Jack Warden and Glynis Johns are hilarious. Hell they should have starred in the movie. Johns (who is still living at the age of 91) as Elsie steals several scenes, “I don't drink anymore... I don't drink any less, either!” And I also cracked up when the paperboy crashes his bike. It looked so real that I wasn't surprised to learn that it was real. It was an unplanned accident and the boy actually broke his wrist. The director decided to leave it in and it's one of the funniest scenes in the movie.

Overall, this movie needed a lot more humor and a more potent central romance. As is, While You Were Sleeping nearly put me to sleep.