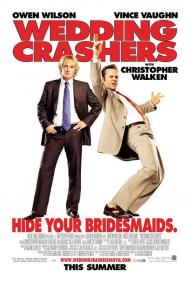 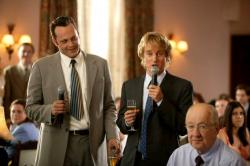 Recently there's cropped up a group of actors appearing in a variety of comedies, including Luke and Owen Wilson, Vince Vaughn, Will Ferrell and Ben Stiller. The list of movies where some or all of these actors appear is impressive, containing; Zoolander, Old School, Starsky & Hutch, Anchorman, and Dodgeball. And the odd thing is that in each of these movies the actors freely swap out who's the star and who plays the supporting character or just makes a cameo appearance. This time around, in Wedding Crashers, it is Owen Wilson and Vince Vaughn's turn to star and it is Ferrell who makes the cameo appearance. The one constant in all of those movies, including this one, is that they are consistently hilarious.

Wilson and Vaughn play John and Jeremy, two divorce mediators whose hobby is crashing weddings and picking up women so besotted by the romance of the ceremony that they'll sleep with anyone. But after years of doing this, John is getting tired and at the biggest wedding of the season, breaks one of the many Wedding Crasher rules by falling in love with Claire; one of the bridesmaids. Jeremy, meanwhile, has slept with Gloria, another bridesmaid, who to his absolute horror, seems to fall in love with him. When the two bridesmaids (they're sisters) invite John and Jeremy to their father's lakeshore home, John jumps at the idea, while Jeremy only agrees to go because one of the Wedding Crasher rules is; never leave a crasher behind.

While the whole movie is funny, it is the first act that is the funniest. Once John and Jeremy become ensconced in the family house, despite a hilarious turn by Vaughn and Isla Fisher as the psychotic bridesmaid, the movie really turns into a conventional romantic comedy. Claire is already engaged to someone else and he turns out to be an arrogant jerk, but naturally she's falling for John, who has of course lied to her, a fact that you just know is going to come out at some point, and so on and so on until your standard romantic comedy ending. It stays funny until the end, but that's despite the clichéd storyline rather than because of it, although the ending is given a boost of humor when Ferrell shows up for his eleventh-hour cameo.

Of the two stars, Vaughn definitely gets the funnier lines, reducing Wilson almost to the role of straight man. Isla Fisher though, manages to steal every scene that she's in, away from both of them. As for McAdams, she plays the beautiful, smart girl (who for some reason is always dating the wrong guy) well enough, but is left only the scraps of humor.

Perhaps the most refreshing thing about this movie is simply the fact that it's rated R. For once a movie didn't cut the corners needed to get a PG-13 rating and still contains a bit of an edge. There's foul language, brief nudity and sex. 20 years ago that was practically the norm in comedies, but today it's far too rare a thing. 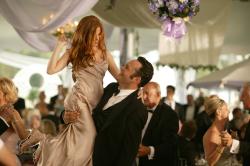 The adult humor in Wedding Crashers is very refreshing. The best jokes in this movie are the sexual ones. I busted a gut when Ilsa raped Jeremy and then her gay brother comes in the room. This is pure rated R situation comedy stuff. The grandma even outs a former first lady.

Unlike Scott, I liked the middle of the movie. The best scenes are when they are staying at the families home. Vaughn literally fights for his life. He gets beat up and shot. Scott is right that the end nearly hits a wall when it has the romantic montage. Is there any bigger cliche than playing a love song while it shows two parted lovers being miserable without each other?

Vince Vaughn and Owen Wilson are a great comic team. Will Ferrell shows up for a brief moment that seems to last a few seconds too long. Wedding Crashers is not a great movie but it is good for a low brow laugh or two. 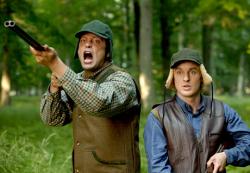 Wedding Crashers is funnier than it should be thanks to the talents of the two main stars. The script is as formulaic as they come. It is filled with cliches and stereotypes. The women are all easily manipulated, emotionally needy and clingy. The men are all lying horn dogs that take full advantage of this fantasy world where legions of beautiful anonymous women will sleep with men that look like Owen Wilson,Vince Vaughn and Will Ferrell just because they met them in a romantic setting like a wedding or (in the case of Ferrell) in a time of sadness such as a funeral.

Somehow we are supposed to root for Owen Wilson when he falls in love with a woman who's already engaged to another man (Bradley Cooper in an early comedic role). Although just why this otherwise intelligent and together woman (played by the eternally annoying Rachel McAdams) would be with this Neanderthal in the first place is never explained. But then rational character development is not a priority in this crude comedy of ill-manners.

Wilson and Vaughn have great comic chemistry together but the ending is a complete cop-out that ruins what came before. If they had remained true to these characters and ended it with them off to get laid at the next wedding I would have enjoyed it more. What begins as a man's frat-boy fantasy winds up squarely in chick-flick territory. These two players are now married and what do they decide to do for fun? Take their brides along to crash a wedding that's what. Really? So what are they going to do, try to pick up chicks with their wives tagging along? It makes no sense. And what's more it takes two hours to get to this scene. Very few comedies should be longer than ninety minutes and this ain't one of them.

Despite all these flaws there are moments of inspired humor to be found in Wedding Crashers but they are few and far between. 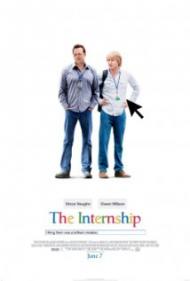