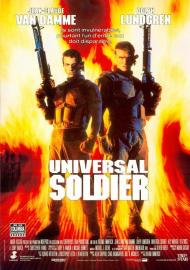 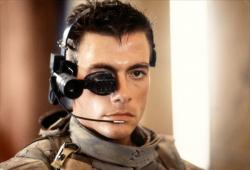 In the early 90's, Jean-Claude Van Damme was the B action/movie hero to A-list Arnold Schwarzenegger. Van Damme's movies all made money and he was always top billed. The one thing he was never able to do was to earn any amount of respect outside the karate/action genre he excelled in.

In Universal Soldier, Van Damme plays a soldier, Luc, killed in Vietnam while fighting his Sargent, Scott, played by C action hero Lundgren. Both soldier's corpses, as well as several others, are used in an experiment in reanimating tissue. Skip twenty six years into the future and the once dead soldiers are now a super human S.W.A.T. team. They were brought back from death and given muscle enhancing drugs. Think of them as a cross between Frankenstein and The Six Million Dollar Man.

While taking down some Terrorists, who are holding hostages at a dam , Luc, has a flashback to his last moments alive in Vietnam. Even though we, the audience, just minutes ago saw what happened, the editor chose to show us the flashback again. He eventually goes AWOL with a Lois Lane wannabe reporter, Veronica. The government gives chase and the rest of the movie plays out like a very bad case of road rage.

Lundgren actually impressed me somewhat. He speaks without an accent. He plays the bad guy in the grandiose Hollywood tradition. His most over the top moment is when he cuts the ears off his victims. It allows him some decent one liners. At one point a scientist yells for someone. Scott throws a few ears on the table and says, "They can't hear you." At another point, the same scientist asks if he can ask him a question. Lundgren turns around in his chair, shows him his necklace made of human ears, and says, "I'm all ears."

The movie has a few good lines. Shortly after fleeing with Luc, Veronica says, "I figured you had to be French or something because of your accent." Van Damme then asks in dead pan, "What accent?" He actually sells the joke. At another point, he strips in front of Veronica and asks her to look for a tracer hidden on his body. "Look for something hard." He tells her. She stands behind him and starts feeling and poking all over his body. He then looks down at his groin and asks, "Is that supposed to be there?" To which Veronica says, "Yes, yes it's very normal." The joke would have worked better had Walker had a better comic reaction.

Walker, though, is not Universal Soldier's only flaw. When they go to Luc's family home, in Louisiana, there are mountains in the background. His parents speak without a French accent. Universal Soldier races along at a great pace. Bullets fly. People get shot. Butts get kicked. Even though the action may entertainingly distract you for a while, this is still just a second rate movie, starring the greatest second rate action/movie star.