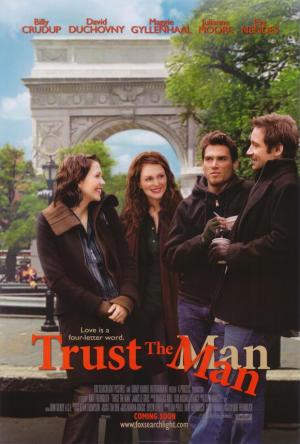 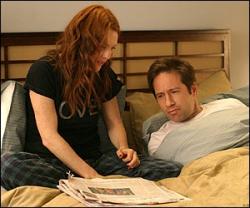 Julianne Moore and David Duchovny in Trust the Man.

Since Woody Allen seems to have temporarily abandoned Manhattan for London, writer-director Bart Freundlich attempts to step into the void with Trust the Man, a movie about a group of Manhattanites dealing with love, sex and a sense of their own immortality. While the cast is good and there are quite a few amusing moments, the end result, hampered in part by an over the top ending, is an unstable movie that manages to entertain but never wow you.

The story centers around two couples. Rebecca, an actress preparing for an upcoming play, is married to Tom, a former ad-copywriter who now stays at home to raise his and Rebecca's children. Their marriage seems happy except for their troubles in the bedroom. Rebecca continually refuses to have sex with Tom and yet somehow seems surprised later when he goes outside the marriage to have some.

After both relationships founder, it is up to the men to rebuild them, since, as in seemingly every love story ever produced by Hollywood, it is the men who are apparently in the wrong. One interesting side story that is never fully explored is the relationship between Rebecca and her younger co-star. He has a crush on her and in a few scenes the movie implies that she has reciprocated something, but it's never spelled out and Tom is the only who seems to have anything to apologize for.

While most of the story is fairly well grounded in reality, the ending is pure Hollywood. Without giving away the specifics, both relationships are mended in the theater at Lincoln Center in full view of the audience in a farcical and over the top manner that could only happen in a movie.

Like many a Woody Allen movie, Manhattan landmarks are featured throughout the story, from the Village to the Upper West Side. I always enjoy seeing the city in movies, especially when it actually is the city and not Toronto, but in this case it isn't really anything more than eye-candy.

Far from perfect but still somewhat enjoyable, I suppose until Woody returns to making movies here, we'll have to settle for what we can get. 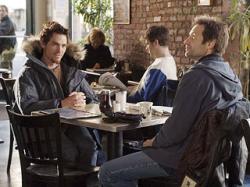 Billy Crudup and David Duchovny in Trust the Man.

I agree Scott, writer/director (and husband of star Julianne Moore) Bart Freundlich, seems to be mimicking Woody Allen with this very New York romantic comedy. His use of locations around the city is very reminiscent of Woody. Another thing that gives it an Allen like quality is the fact that the focus of the story jumps around to each of the four main characters. It's a true ensemble piece with no singular character dominating the storyline. Unfortunately it is nowhere near as good as Allen at his best, lacking his sharp wit and ear for dialogue.

The script paints such a cliched version of male/female romance that it begs a question of Freundlich. Is this how he sees men and women in relationships or is this his interpretation of how he thinks women see men and women in relationships? I ask that because the over-the-top ending that my brother mentioned, is pure chick-flick fantasy. In this world women are mature, if a bit emotionally needy, while men are generally selfish, lacking in a sense of romance, and unable to express their feelings. All it takes for these two couples to end the movie kissing is for the men to make a romantic gesture while spouting platitudes about love.

The cast is good. For the most part it stays a four person show with a couple of famous faces popping up for cameos or bit parts. Eve Mendes has a few scenes as Billy Crudup's ex. Garry Shandling and Bob Balaban are both therapists, and Ellen Barkin plays a lesbian who plants a kiss on Maggie Gyllenhaal. How ironic that David Duchovny plays a man attending Sex Addicts Anonymous meetings. Julianne Moore is a famous actress playing a famous actress. She hugely underplays it. It isn't until the final scene at the theater that she displays her inner Margo Channing. Together the film's two biggest stars lack any chemistry. Gyllenhaal and Crudup fare better and make a far more believable couple. They at least exhibit some passion for one another.

Despite the talents of the cast and the backdrop of the greatest city on the planet, Trust the Man never overcomes its simplistic psychology and decided lack of originality. A fact it seems to acknowledge by way of paying brief tribute to two romantic classics. In one scene a depressed Crudup watches The Way We Were, and later in the movie he yells Gyllenhaal's name in a crowded theater, “Elaine!” just like Dustin Hoffman did in that church at the climax of The Graduate. In the end though the best Trust the Man can muster is to be fairly amusing, and then only sporadically. 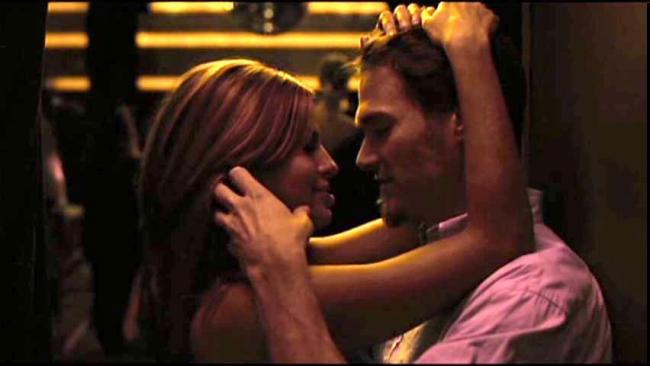 Eva Mendes and Billy Crudup in Trust the Man

Trust the Man is an attempt at a New York comedy about modern upper middle class couples whose only problems are the ones they create for themselves. Rebecca never gives a reason for why she refuses to have sex with her husband. OK, at one point she says it is because he tries to do it from behind. Seriously? The position is obviously not the problem as he would take what ever position she will allow, so Rebecca simply comes across as a selfish bitch. Yes ladies, your husbands see your denial of sex as a lack of love.

Her self centered life does not excuse Tom from having an affair but it does explain it. However, I am with Scott on the fact that his affair and a porn habit is not, by any means, a reason to join a sex addiction therapy group. The movie tries to state that as well by having Tom make up the cold cuts fetish to fit in. Doesn't that contradict the purpose of him going there and make the point that he does not have an addiction? Men's egos are wrapped up in their sexuality. His wife cares not to build up his ego so he seeks out someone who does. You would think that an actress, of all people, would understand how important a healthy ego can be.

Tobey is stuck in the past. As Scott mentioned, he still has an attraction to his ex-girlfriend but I think it is best symbolized by his old car that he rarely uses but causes arguments in his relationship with Elaine. For some reason, he writes and cooks in his car? He acts as mature as a lazy college sophomore even though he is closing in on middle age. Elaine is a cliche at every turn. She puts up with Tobey being worthless because she has invested seven years in their relationship and does not want to think all that time went to waste. One day she decides to tell Tobey she wants marriage and a child. He acts like that revelation came out of nowhere while she gets pissed off because he reminds her that he has made it clear he is a child that does not intend on growing up. She picked a loser and is now mad that he has not changed in to the person she wanted him to become.

The interaction of the four leads is mildly interesting, at best. However, their interaction is not enough to sustain an interesting plot so Freundlich threw some stuff in that does not make things any more entertaining. Elaine gets hit on by a woman who may or may not publish her children's book. Tobey stalks his therapist for inexplicable reasons. Rebecca and Tom are likewise in couples therapy. Elaine takes up with a European snob. It's a give away when he takes off his glasses and holds them in his hand when trying to make a point in his foreign accent.

The most groan inducing moment for me was also the ending, that my brothers detested as well. It comes when Rebecca holds a prop stick from the stage for Tom to grab and help him up. Earlier in the film, Rebecca explained to Elaine that she always saw hers and Tom's relationship as the two of them holding opposite ends of the same stick. Sometimes the stick was short and they were close and at other times the stick was long and there was a distance between them but they always held onto the stick. Yeah, I almost blew chunks. As Patrick wrote, Freundlich does not write great lines, and as this film is intended to be dialogue driven, it is all pretty much a failed attempt.