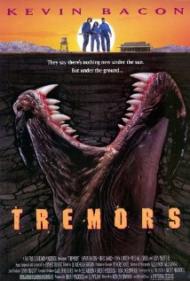 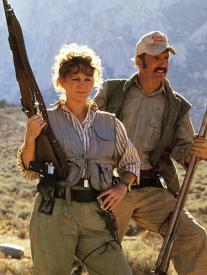 I am not sure how many times Scott and I watched Tremors but it was one we saw several times when it first came out on video. Although it made a profit on its initial theatrical release, it was not until Tremors was released on video that it truly gained a large following. So much so that it earned sequels and a very brief television series. I have no idea how long it has been since I, or Scott, has seen this but it remains a light hearted horror piece of entertainment.

The entire film takes place in and around the very tiny desert town of Perfection, where a large underground monster begins eating the small population one by one. The monster is a giant worm, think Dune, that sense seismic movement and attacks. As awesome as the monster is, the real selling point of this movie are the characters that populate this town.

Valentine and Earl are the town’s handymen who do everyone’s dirty jobs from fixing things to emptying septic tanks. They are not as bright as they think they are. Velentine states, “Earl explained it to me: we plan ahead, that way, we don't do anything right now.” They are the ones who first find the remains of the victims. Just when they get it in their head to leave Perfection, they get chased by the monster and meet an attractive seismologist who asks, “Did you notice anything weird a minute ago?”

They all return to Perfection where they become trapped in their town. All, that is, except Burt and Heather, the two survivalists who live just outside of town. They have a gun collection that would impress most guerilla armies. Their zeal and enthusiasm steal many scenes. Look at the moment during an action scene where Heather holds out her hand and says, “Magazine!” Burt throws it to her like they have practiced that moment all their life.

They also get some of the film’s most memorable lines. These lines may not be funny just to read but within the context of the story they are hilarious, “Broke into the wrong goddamn rec room, didn't ya, you bastard!” “You didn't get penetration even with the elephant gun?” “Just a few house hold chemicals in proper proportions.”

Tremors is a fast paced fun filled horror film. It stands up quite well. The special effects are not exactly perfect but they still work well enough today. This was made before CGI dominated film making. Although I do not exactly consider this an old movie, I still feel fair in saying they don’t, often, make movies like this anymore.

The key word for this film is "fun". It's a very lightweight horror film that packs in quite a few laughs. It's highly reminiscent of those sci-fi monster movies like Them! and Night of the Lepus where some giant predator is stalking a small town. It succeeds mainly because it never takes itself seriously and keeps its tongue firmly in its cheek. And yet remarkably it keeps just enough of a sense of danger so that you remain invested in the characters' survival.

At the time, Bacon's career was at an all-time low and he didn't think much of this film. In a 2013 interview in the Daily Telegraph he recalled that after accepting the part, "I broke down and fell to the sidewalk, screaming to my pregnant wife, ‘I can’t believe I’m doing a movie about underground worms!'" He may have made more prestigious movies, but this one has held up surprisingly well, developing a cult following over the years. It's a pity he never appeared in any of the sequels.

While Eric is right that the supporting cast steal many scenes, Bacon and Ward share a nice camaraderie that works well. Definitely not the brightest bulbs in the box, they make the perfect heroes for the off-kilter premise. Gross and McEntire do their best to steal the movie from them however, with their survival ways and military jargon laden speeches. They always make me laugh and this time, my first viewing in years, was no exception.

As enjoyable as it is, it's not quite a perfect film. I always felt that the lack of explanation of where the graboids come from was a weakness. Given that the film is set in Nevada, where many nuclear tests took place in the 1950s and 1960s, I always assumed they were created by radiation. However, a direct-to-video prequel, which I've never actually seen, seems to contradict this by taking place in the 1880s. Perhaps one of the other sequels or the short-lived television series explained their origins, but the film leaves it up in the air. There is also a lack of truly scary moments. Granted it's more of a comedy than a horror film, but there just isn't that true "jump out of your seat" moment or even many creepy moments.

In terms of sheer entertainment, Tremors succeeds perfectly. It's fast-paced and funny and does just about everything it sets out to do.

Tremors is more than highly reminiscent of those classic sci/fi monster movies of the 1950s. It is a full out homage to all the one word B-movie thrillers that came before. Eric mentioned Dune, and these Graboids do have a suspicious amount in common with Frank Herbert's giant sand worms. The way it takes a while for the creature to be shown, before we get a good long look at them, is very similar to the way Spielberg employed the shark in Jaws. Tremors also has elements of the western. Director Ron Underwood used the distant Sierra Mountains to create a framed vista that provides a strong sense of isolation, much like John Ford used Monument Valley. Tremors is a wonderful mix of ideas.

The fact that they don't explicitly state the origin of the Graboids didn't bother me. They have fun with the various possibilities in one scene where the characters are stranded on a rock. Valentine thinks they are either the result of radioactive mutation or a secret government weapons program. Rhonda suggests they evolved naturally and that they might even predate the fossil record, while Earl guesses they're space aliens. The script winks at the audience as if you to say, “Take your pick.”

Tremors finds exactly the right tone in every single frame. It takes itself seriously in the ways in which it needs to be taken seriously, such as the reality of these giant subterranean creatures. For one thing the gore is undeniable. But it never takes itself too seriously in terms of trying to be anything other than what it is; pure cinematic entertainment. Its lack of pretension is quite refreshing.

The laughs and scares go hand in glove, the characters are funny and likable, the cast play off each other beautifully, and the special effects/scares hold up quite nicely. Another way in which it resembles those older pictures is in its length. It runs just 90 minutes. The tension and danger escalate nicely without ever going too far. Any movie that leaves you wanting more is a winner in my book. Tremors now sits deservedly among all those movies that influenced it as well as those movies yet to be made that will borrow ideas from Tremors without necessarily realizing where they originated. Tremors is a wonderful homage that also stands on its own. 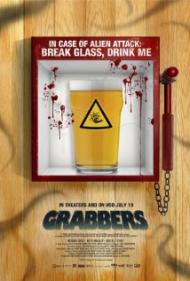