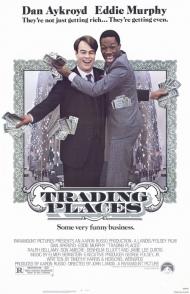 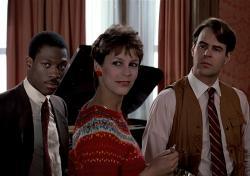 Trading Places is a screwball comedy from director John Landis in 1983 (it marked his first collaboration with Eddie Murphy). It is an old fashioned satire along the lines of something Frank Capra or Preston Sturges would have made 40 years earlier. It has a Prince and the Pauper plot wherein two men from vastly different backgrounds switch places. It was a huge hit in the summer of 1983, further cementing Eddie Murphy as one of the most bankable stars of the decade. Dan Aykroyd and Jamie Lee Curtis costar.

Set in Philadelphia at the holidays, Trading Places tells how a wealthy commodities broker named Louis Winthorpe III (Aykroyd) and homeless street hustler Billy Ray Valentine (Murphy) become unwitting pawns in a bet between the Duke brothers, the elderly and very rich owners of the brokerage house Winthorpe works for. The bet is a nature vs. nurture competition to see just how these men will react if they both suddenly find their fortunes reversed.

Ralph Bellamy and Don Ameche nearly steal the movie as Randolph and Mortimer Duke. Their presence adds to the old fashioned feel of the story since they were both around making screwball comedies during Hollywood's golden age. Bellamy was in His Girl Friday and Ameche was in Midnight. The Duke brothers are classic comedy villains who get their hilarious comeuppance at the conclusion.

Trading Places was originally intended as a vehicle for Richard Pryor and Gene Wilder, who had recently had much success as a comedy team in movies like Silver Streak and Stir Crazy. It's easy to picture the two of them in this movie although Murphy and Aykroyd are indeed perfect in these roles.

There is a scene on a train (like so many classic comedies before it) that is wonderfully funny. Murphy imitates an African exchange student from Cameroon named Nenge Mboko, “Merry New Year!” and Aykroyd dons black-face (something Wilder did in Silver Streak) to play a Rastafarian. Curtis, not to be left out, does a bad Swiss accent while showing off her ample breasts.

The venerable British actor Denholm Elliott rounds out the group. He plays a valet who works for the Duke brothers who joins forces with Valentine and Winthorpe to teach Randolph and Mortimer a lesson. He poses as a man of the cloth for this scene on the train, which ends with a man in a gorilla suit getting raped by a real gorilla (even though it is obviously another man in a gorilla suit) for laughs.

Trading Places was released in June but is set at the holidays. Throughout the movie Christmas trees, wreaths and other holiday decorations give it a festive feel that is also quaintly old fashioned. This contrasts with the four letter words and naked breasts on display; both of which date the movie as being from the 1980s.

Trading Places is first and foremost a display of Eddie Murphy's vast and hilarious comedic talent (sort of an updated Jerry Lewis). But unlike some of his later movies this one is truly an ensemble. Dan Aykroyd, Jamie Lee Curtis, Ralph Bellamy, Don Ameche and Denholm Elliott are all equally funny.

Trading Places is a movie I loved in 1983 as a 16 year old. Seen from the vantage point of 2013 (30 years later) it looks like one of the best comedies made during the 1980s. If anything, Trading Places has only gotten funnier with age.

Ralph Bellamy and Don Ameche as the Duke brothers in Trading Places.

Can it really be 30 years since this movie was released? If there's any doubt, one look at the cars, the computers, the hair and especially the clothes, will confirm it for you. If that weren't enough, a baby faced and relatively thin Dan Aykroyd will surely drive home the point that this movie was made a long time ago. Its comedy though, is timeless. This is in part because it's just plain funny, but also because, as Patrick pointed out, there's an old fashioned feel to the movie that goes beyond its 1980's origins. It's easy to imagine Capra or Sturgess directing a similar film in the 1930s or 1940s. The presence of Bellamy and Ameche adds to the old Hollywood feel.

I agree that Murphy is funny. He was on the cusp of super-stardom at this point in his career. This was just his second film and he was still starring on Saturday Night Live when it was released. He was just one year away from going solo in Beverly Hills Cop, but as Patrick wrote, here he is part of an ensemble cast, all of whom get a chance in the spotlight. Aykroyd's prissy Winthorpe makes a good foil for Murphy's street-smart Valentine, while generating laughs on his own. Curtis is hot, in a very 1980's way, including her first nude scene. Her funniest moment comes in the silly train scene when she dresses up in German lederhosen, but speaks with a Swedish accent (reportedly because Curtis couldn't do a convincing German accent). I also agree that Bellamy and Ameche are scene-stealers as the Duke brothers.

Although it hardly hurts the humor, there are portions of the story that don't quite work. Valentine goes from a man begging in the street to successfully managing a Brokerage House far too easily and far too quickly. I know that this is a screwball comedy that at one point uses a man in an ape costume getting raped by a real gorilla as a punchline, but still Valentine's sudden transformation never feels real.

As Patrick wrote, Trading Places was released in June, despite its Christmas setting. Given its box office success, a summer release may have been the right move at the time, but now I, and I suspect others, associate this movie with the holidays.

One unexpected legacy of the film was a regulation put into effect in 2010, known as "The Eddie Murphy Law" which related to the insider trading conducted in this film. The fact that this regulation would take its name from a nearly 30 year old (at the time) movie, just goes to show how fondly it is remembered after all this time and deservedly so. 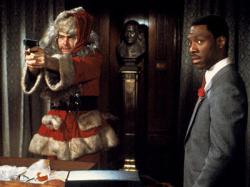 Scott wrote how easily Valentine goes from a beggar to a Broker. I agree it is a stretch and will add that Winthorpe as well falls far too easily. Having gone to Harvard, he obviously came from money. Falling from grace at his firm would not erase his family connections. No mention is ever made of his parents or why he does not seek any family help.

My brothers also wrote how the film has an old feel to it with some classic movie trappings. Jamie Lee Curtis plays the classic stereotype of the whore with a heart of gold. She far too easily allows Winthorpe into her apartment and her life. He likewise goes from being in love with a prudish snob to a street walker without much explanation.

Forgive this film for its small discretions though and you are in for a delightfully quick paced comedy. Bellamy and Ameche are a hoot. Bellamy, “Mother always said you were greedy.” Ameche, “She meant it as a compliment.” Yeah, the dialogue is decent but not exceptional. When I first saw this film, my favorite line was when Eddie Murphy is in a Jacuzzi for the first time and says, “When I was growing up, if we wanted a Jacuzzi, we had to fart in the tub.”

Where Trading Places truly succeeds is in the simple story of two men from opposite sides of the tracks coming together to take down some evil rich men. The cast is terrific. Eddie Murphy’s star power was just starting to show and man did he have some serious wattage. Dan Aykroyd has always done his best work in ensemble casts and does not disappoint here. Jamie Lee Curtis has never looked better. Denholm Elliott is known for his small role in the Indiana Jones films but they never gave him the chance to shine like he does here.

Trading Places is an old time comedy with 1980s subject matter. It is funny, charming and timeless. Consider that it also takes place during the holidays; this film may prove to be Murphy’s most memorable film.