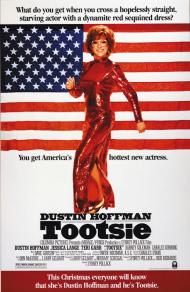 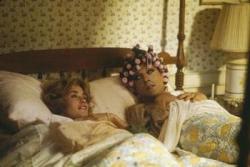 Tootsie is the funniest cross dressing film since Some Like it Hot.  In both films a man, or men, dress as women with great comic results.  Both have men falling in love with a woman while in drag.  The difference is that Some Like it Hot is played entirely for laughs while Tootsie tries to make a feminist statement about women being strong and respected.

Michael Dorsey is a starving actor in New York, waiting tables and waiting for a break.   He has been at it for years and has earned a reputation for speaking his mind and pissing off directors.  Thus he has a hard time getting work.   He eventually becomes so desperate that he secretly auditions for a role on a soap opera as a woman, Dorothy Michaels.  He not only gets the job but becomes a sensation.

Michael had originally coached his friend Sandy for the part, but she was quickly dismissed for being too easy going.  As Dorothy, Michael impresses the producers of the show by standing up to the director.  Later he/she takes things further by making his/her character on the show stronger than actually written.  This hits a chord with co-stars and fans alike.

Michael took the job so as to earn money to produce his roommate's play, that he and Sandy will star in.  Complications, of course, arise.  He falls in love with a co-star on the show, Julie, who only knows him as Dorothy.  Things get even more complicated when Julie's father falls for Dorothy.

The scene, as well as the entire trip to Julie's father's farm, is meant to teach Michael that Julie is not just a sexual conquest, but a real person.    I get where the movie wants to go, but this is about a man lying to people who trust him, and playing with their emotions.   These scenes undermine Michael and make him a less likable character.

Tootsie works best when focused on the comedy. Hoffman is very convincing in drag. He looks like a conservative, English school teacher.  Any time he acts up while in costume the movie is a hoot!   Jessica Lange is absolutely gorgeous in this movie.  She radiates a charm not seen on the big screen since Marilyn Monroe.  Teri Garr has a thankless role but has some great lines, "No, we are not friends. I don't take this shit from friends. Only lovers." Bill Murray steals a few scenes as Michael's roommate.  "You slut!"  This is also Geena Davis's film debut.  Her most memorable scene is when she is wearing only her under wear in front of Dorothy and he says, "What kind of mother would I be if I didn't give my girls tits... tips?"

Tootsie is a great situation comedy but it over states the message of respecting women for more than sex.    "I was a better man with you, as a woman... than I ever was with a woman, as a man."   The men in Some Like it Hot learn how it is to be a woman in a man's world without getting sidetracked by it.  Tootsie remains a great film but it falls off the comic rail once too often. 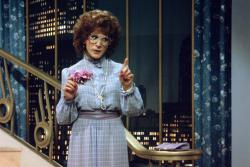 Although I disagree with Eric somewhat about how effective the more dramatic moments in this movie are, I do agree that it works best as a comedy. The occasional serious scene adds a touch of poignancy to the humor and it wouldn't be as well remembered now or have been nominated for so many Oscars, without the drama.

I do agree wholeheartedly with Eric that Hoffman is very convincing in drag. Eric mentioned Some Like it Hot, which is a classic comedy that I love, but Lemmon and Curtis are so obviously men that you just have to accept that Monroe doesn't see through their disguise. In this movie though, you have no problem accepting that people believe Dorothy is a woman. Watch the scene where Hoffman asks his roommate played by Murray how he looks when he's dressed as Dorothy. At this point he looks like a man in drag, but then Murray tells him to say something in Dorothy's voice at which point Hoffman seems to throw a switch and suddenly he's Dorothy introducing herself. He lost the Oscar to Ben Kingsley for Ghandi, but his performance, while lighter in nature, is no less impressive or award worthy.

It isn't the scene where Dorothy and Julie share a bed that makes Michael creepy. That's one of the most pivotal scenes in the movie and I actually found it rather touching. The scene that makes Michael creepy is when he approaches Julie at a party, as Michael, and tries to seduce her using information he gathered as Dorothy. It also seems odd that Julie doesn't comment on the fact that this stranger uses the exact same approach and word-for-word phrasing that she mentioned to Dorothy in an earlier scene.

One area of the film that is vaguely touched upon, but never fully explored, is how Michael treats Sandy the same way that Ron treats Julie. Michael's treatment of Sandy is played for laughs, while Ron's treatment of Julie is meant to show what an asshole he is. It would have been nice to have a final moment between Michael and Sandy where he acknowledges this. Michael tells Julie at the end, “I was a better man with you, as a woman... than I ever was with a woman, as a man.” Which is very sweet, but while he was being a better man with Julie, he was screwing over Sandy.

Eric mentioned Garr and Murray and they do both generate laughs in supporting parts. He didn't mention some of my favorites scenes though, which are between Hoffman and Pollack, who not only directed, but also played Michael's agent. Their discussion of why Michael can't find work and later when Michael tries to explain to him the confusion about his sexuality are two of the funniest scenes in the film.

Thirty years after its release, Tootsie remains a classic. Any flaws it may have are more than made up for by Hoffman's extraordinary performance.

The number one trope of all cross dressing movies (from Queen Christina to Yentl) is the scene where the star spends the night in the same bed with the object of their desire, who believes them to be of the same gender. I therefore agree with Scott about the scene where Julie and Michael/Dorothy sleep over together. It is very important in the growing closeness of their characters. Although in this movie it isn't played for laughs like it usually is.

Like my brothers I think this movie works best when being funny. I do think it has something to say about sexism but it is also a bit inconsistent in its message as my brothers also pointed out. Up until the end Michael seems only able to see things from a woman's perspective while in drag. As Michael he is nearly as chauvinistic and condescending towards women as Ron.

Hoffman's performance is a work of art and shines in a movie filled with great performances. There are many layers to his work in this film. He is not only believable as a woman but he is really playing three roles here. During his scenes on the set of Southwest General (a wonderful parody of daytime dramas, specifically General Hospital) he is Dustin Hoffman playing Michael Dorsey playing Dorothy Michaels playing Emily Kimberly. There are subtle differences in his manner as Dorothy and as Emily.  For one thing Emily is played bigger and more for laughs than Dorothy. She is more of a caricature of a woman, while Dorothy is played for realness.

There is a stretch of this movie near the climax that I would put up against nearly any other comedy in terms of the sheer number of laughs it generates.

Beginning with the lecherous old soap actor, played by George Gaynes, serenading Dorothy from the street with “I'll Know” from Guys and Dolls. Dorothy lets him in to shut him up and he immediately pounces on her after announcing, “Dorothy, I want you.” Bill Murray comes in at the last possible second and saves Dorothy's secret from being discovered. The old man very seriously assures Murray that nothing happened between him and Dorothy. Murray plays along and answers, “Thank you, John.” in an equally serious tone of voice. Then once John leaves, Murray says the line Eric quoted, “You slut.” which got the single biggest laugh in the entire movie.

This is followed by the scene Scott mentioned where Michael explains his sexual identity crisis to his agent George Fields, played by Sydney Pollack. It includes this incredibly funny exchange between them...

Movie dialogue rarely gets funnier than that.

I saw this movie with my brothers and our dad back in 1982. I haven't watched it in years but I agree wholeheartedly that Tootsie holds up well and remains a classic cross dressing comedy. 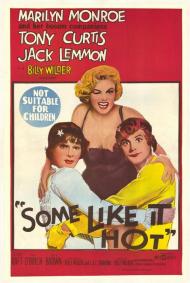