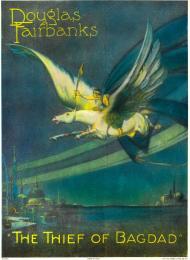 Douglas Fairbanks in The Thief of Bagdad

Douglas Fairbanks was the first true action movie hero. Some of his early work was with D.W. Griffith who Fairbanks recalled did not appreciate what he brought to a movie, “D. W. didn't like my athletic tendencies, or my spontaneous habit of jumping a fence or scaling a church at unexpected moments which were not in the script. Griffith told me to go into Keystone comedies.” By 1920 Fairbanks was putting all of that energy to good use. The next five years were the height of his career. During that time he starred in large productions of Zorro (1920), The Three Musketeers (1921) and Robin Hood (1922). His versions set a standard that took decades to be surpassed.

With The Thief of Bagdad, Fairbanks was at the very pinnacle of his Hollywood fame and power. He wrote the story and his production company came up with the well over $1,000,000 budget. Much of which was spent on the many large scale sets. At 41 years of age, Fairbanks was still in great shape. He was always known for his athleticism and did most of his own stunts. Fairbanks making this kind of film was like putting Harold Lloyd on the side of a building. You put the right person in their element and magic just happens.

Fairbanks plays a thief in ancient Bagdad. He is never given an actual name. The first 20 minutes are just him running and climbing about the city, stealing what he can. One night he sneaks into the palace, spies the princess asleep, and falls immediately in love. There is just one little problem; several princely suitors have arrived in town to vie for the princess’s hand in marriage. What is the thief to do but pretend to likewise be a prince.

His charade does not fool everyone and the thief soon finds himself on a quest. The last part of the film is full of special effects. Fairbanks battles a giant lizard in a cave. He flies on a Pegasus. He rides on a magic carpet. He swims to the bottom of the sea. Like Buster Keaton, Fairbanks often seemed more like a child at play than an adult at work.

The Thief of Bagdad is a giant silent film spectacle, where everything is larger than life, be it the sets or the acting. Fairbanks was more of a ham than an actor. The story drags a bit at times. It runs well over two hours. However, it is worth the watch just to see the world’s first true action movie star battle the beasts, right the wrongs and rescue a princess. All of today’s special effects packed action films owe Douglas Fairbanks his due. He was the first action star and few since have ever come close to doing it as well. 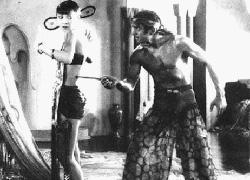 Anna May Wong and Douglas Fairbanks in The Thief of Bagdad.

Technology may have changed drastically in the nearly 90 years since this movie was produced, but some things never go out of style. Overly long special effects laden spectacle was in fashion then and Hollywood is still producing those types of films today. Not every actor of the silent era would be able to make it in today's world, but it's easy to picture Douglas Fairbanks donning  a costume in some modern superhero franchise. He'd have to tone down the over acting, but they'd certainly save money on stuntmen.

As Eric said, Fairbanks was 41 years old when he made this movie, as well as being a life long smoker, and yet he was in great shape. He spends the majority of the film without a shirt and while he didn't have the largest muscles, you can see that he had very little body fat and-at least thanks to the magic of the movies-a seemingly boundless amount of energy. He is almost always in motion, even when standing still, which is a rare thing.

The plot was inspired by several of the Arabian Nights tales and is pure fairytale adventure. In structure, it reminded me of a video game, particularly the third act when Fairbanks is on his quest to win the princess, facing different monsters and trials in sequence. It's the type of story that can be enjoyed by almost anyone of any age. It's pure adventure.

Another difference between this film and one made today is that today much of the film would be done on a computer. Here of course, most of it had to be built in the real world. The sets, props and costumes are all impressively done. The sets in particular are on a scale you rarely see anymore. Everything is larger than life and quite detailed, giving Fairbanks plenty of things to climb on and over.

It's also easy to see why the free-wheeling, ball of energy, Fairbanks would have a hard time transitioning into talking pictures. Not only was his age catching up to him by that time, but the static sound cameras would never be able to keep up with him.

The AFI named The Thief of Bagdad the 9th greatest fantasy film of all time. It's an entertaining treat despite its age. It's only the hammy acting, particularly by Fairbanks himself, that truly dates it. Despite that and an extra long running time, it still remains remarkably watchable today.

Douglas Fairbanks and Julanne Johnston in The Thief of Bagdad.

It's easy to see how they spent over a million dollars in 1924 currency on this lavish spectacle of a movie. As my brothers already mentioned, the sets (by William Cameron Menzies) are incredible and the special effects state of the art for the time. The scenes of the flying carpet remain an impressive visual trick (see photo). I also liked the magic rope Ahmed (actually Eric, they did give his name) used to climb into the palace.

Douglas Fairbanks was a star beloved by children, especially young boys. What 12-year-old in 1924 wouldn't love this epic fantasy? It would have been unlike anything they'd ever seen. Sure there is a bit of romance but it is really all about the quest and the action set pieces. As Scott suggested, this type of movie virtually disappeared from the screen with the coming of sound, which seriously hampered camera movement. It would take about five years into the talkie craze for technology to catch back up to where it was at the end of the silent era.

This movie helped launch the career of Hollywood's first Asian female star, Anna May Wong. As was often the case for ethnic actors she plays a villain, and quite a beautiful, sultry villain she makes. Unlike Fairbanks she was able to successfully make the transition to sound. After a stint in Europe she returned to Hollywood in the 1930s. She made her last movie appearance in 1960.

If you looked closely at the Persian Prince you may have noticed that “he” was really played by a woman, Mathilde Comont. Although to help keep this fact a secret she was billed as M. Comont in some prints of the film. I'm not sure just why they did this but it does make for an interesting bit of trivia.

The Thief of Bagdad is an imaginative whirlwind of fantasy and adventure. It unlocks that place in our brains where fancy lives. Douglas Fairbanks was the perfect star for his era and this just might be his greatest cinematic achievement (although The Mark of Zorro remains my personal favorite of his films). And there's a moral to the story as well. At the beginning of the movie Ahmed lives by the philosophy, “What I want, I take.” By the time he flies off into the sunset on his flying carpet with his arms around the princess, he has learned to embody the movie's message. “Happiness must be earned.”