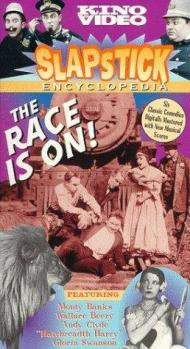 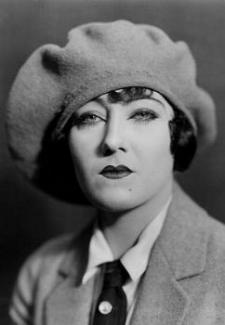 I always thought of Gloria Swanson as a dramatic actress, having only seen her in serious roles. However, she started out in Mack Sennett comedies before Cecil B. Demille made her a superstar in bedroom dramas. I was delighted to come across the silent film comedy short, Teddy at the Throttle.

Gloria lives, with her faithful dog Teddy, in a mansion also occupied by her intended, Bobbie. They have separate bedrooms. Also in the home is Bobbie’s guardian, Henry, who oversees Bobbie’s inheritance. A letter arrives from Bobbie’s rich relative, stating that Bobby will get all the money and not need a guardian as soon as he marries. Not to be left out, Henry invites his sister to vamp Bobbie into marrying her, so as to insure Henry stays in the money.

This leads to Gloria throwing a number of hissy fits as she sees her boyfriend falling for the buxom sister. Everything seems to be going to Henry’s plan as Bobbie ends up proposing to his sister. However, a second letter arrives that states that Bobbie only gets the money if he marries Gloria. If he marries anyone else, Gloria gets it all herself. Henry decides to make this work and starts to flirt with Gloria.

The movie really gets going when Gloria finds the second letter and discovers what Henry is up to. At a party, Gloria tries to talk to Bobbie who is dancing with Henry’s sister. The sister says of Gloria, “Some people don’t know when they’ve lost out.” Not knowing it is she who has.

A huge storm hits, and Gloria ends up chasing Bobbie and his girlfriend through the rain, while she is pursued by Henry, who wants to stop her from telling his secret. What is the silent film villain to do but abduct Gloria and tie her to the train tracks. (Why did they always do that?) Will Bobbie come to his senses in time, or will Gloria’s dog have to save the day?

Teddy at the Throttle is a classic little silent film comedy. It is an early romantic comedy that shows Gloria Swanson was quite a versatile actress. 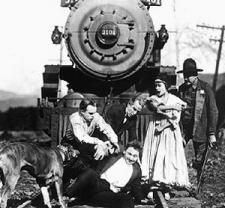 Gloria Swanson was married to Wallace Beery at the time this movie was made. Ironically, while Swanson would soon be one of the biggest stars in Hollywood, it would take Beery until after the birth of sound and the stock market crash before he would finally achieve stardom in the early 1930’s. Swanson would graduate from the two-reeler to the feature film less than two years later after Cecil B. DeMille brought her to Paramount and starred her in Don’t Change Your Husband. This is the equivalent of going from a television sitcom to the movies today.

As for Teddy at the Throttle it is a somewhat amusing Mack Sennett slapstick comedy. It is fast paced and totally silly. I like how Swanson whistles for her dog when she is tied to the tracks and then writes a note for him to take to Bobbie. The rescue is pretty exciting though, especially for such an early movie. The front end of the train actually covers Swanson’s body before it comes to a complete stop.

One thing I dislike about these early movies is the lack of close-ups. They were still new at the time and were rarely used, especially in two-reelers. There isn’t a single shot tighter than mid-chest in this movie. Close-ups didn’t really become common until the mid-20’s when the great Garbo made them famous. With or without close-ups, Teddy at the Throttle is a fine example of early slapstick comedy that features two future stars at the beginning of their careers. 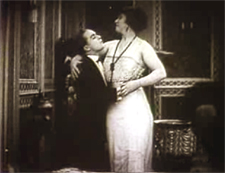 Filled with some nice comic moments.

Although I'd heard of it happening in old movies before, this is the first time I'd ever actually seen a woman tied to railroad tracks. I agree with you Patrick, I love how she writes the note with the help of the dog and how nonchalantly she writes, "Tied to the tracks", as if it's a common occurrence. The train rolling over Swanson isn't quite as impressive when you realize she just climbs down into a hole that was dug there. You can see it pretty clearly when the train approaches and when they pull her out of it.

This was also the first time I'd seen Gloria Swanson in a movie except for Sunset Boulevard. I couldn't help but think of her as a young Norma Desmond as I watched. I can't say that judging her by this role I would have predicted that she would go on to become a legendary actress. I also have to say that she really wasn't that attractive. Maybe it's not such a bad thing there were no close-ups. I know, I know, that's sacrilege, right Patrick?

My favorite scene in the movie has to be the dance scene where Bobbie dances with the villain's sister. He's so short that she tosses him around like a little kid and he ends up standing on her knee. In an earlier scene he had to stand on the couch so he could reach her mouth to kiss her. I also loved how the will kept getting more and more complicated.

And speaking of short, I don't know if it was deliberate casting, but Bobby Vernon is listed as 5'2" on IMDB and Swanson as 5'1". Next to Beery and Emory, they look like little kids, which works for the plot and greatly adds to the comic effect.

As someone who's not a huge fan of silent movies, I have to say I found this one to be pretty amusing and at just 18 minutes, it flies by. 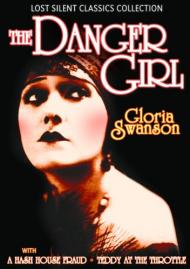