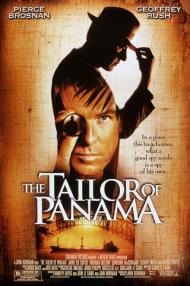 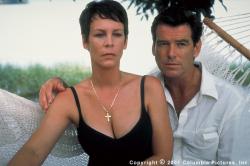 Jamie Lee Curtis and Pierce Brosnan in The Tailor of Panama.

John Le Carre is one of my favorite authors. He is also a very fortunate author in that unlike so many others, his books have been translated into movies very successfully, starting with the classic The Spy Who Came in From the Cold starring Richard Burton, in 1965, and continuing today with The Tailor of Panama. Perhaps his success lies in that his work has attracted some of Hollywood's top talent. Besides Burton, Sean Connery (The Russia House), Alec Guiness (Tinker, Tailor, Soldier, Spy), Diane Keaton (The Little Drummer Girl), and now Pierce Brosnan and Geoffrey Rush have all worked on film versions of his novels.

The Tailor of Panama tells the story of, you guessed it, a tailor (Rush) living in Panama. But not just any tailor. This is a tailor who dresses the President along with any number of other high ranking officials and diplomats. He is also a tailor with a past that he would rather keep hidden, particularly from his wife (Curtis). Enter disgraced, British spy Andrew Osnard (Brosnan) who is only too happy to take advantage of the tailor to find out what he wants to know about the goings on in Panama.

Geoffrey Rush is a great actor and he has some fine dramatic moments as the little tailor whose penchant for lying nearly destroys the life he has set up for himself. Jamie Lee Curtis is also quite good and what other woman her age would still dare to do a nude scene and still look so damn good doing it? But it is Pierce Brosnan who steals the movie. While it might not seem a stretch for him to play a good looking British spy, this character is a far cry from James Bond. He is crude, self serving, and has a vulgar, acid tongue. "Working in the dark is like oral sex, someone has to do it," he spouts at one time. He arranges clandestine meetings in hotel rooms that rent by the hour, complete with prostitutes, porn on the television, and vibrating beds. In a sense, he is playing the bad guy here, but I was rooting for him the whole way.

This movie has tension, drama, political intrigue, and most surprisingly, considering the subject matter, a wicked sense of humor that ranges from Brosnan's exploits to poking fun at the over zealousness of the American officials, the military to be precise.

As a fan of the book, I was happy that the movie updated the story to today, the book took place before the canal hand-over, without losing any of the finer parts of the novel structure. In the book, Pendel very often carries on an inner dialogue with his dead Uncle Benny, the movie handles this quite well, inserting Uncle Benny, almost ghost like into scenes, with Pendel muttering asides to him that only he and Benny can hear.

An adult thriller, The Tailor of Panama is a welcome relief from the teeny-bopper, popcorn movies, that so often seem to be the only kind of movie Hollywood is capable of making. 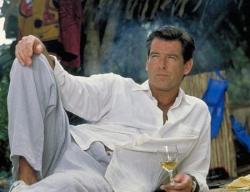 Pierce Brosnan in The Tailor of Panama.

The Tailor of Panama is the sort of movie that you have to pay close attention to so that you catch all the goings on. Everyone is pretty much lying to everyone else and if you watch closely you can keep up. Dialogue moves the plot along not action.

Pierce Brosnan is great here as the anti-Bond British agent Andy Osgood. His loyalty is to himself and not merry old England. Brosnan does some fine acting here. His spy is a much more of a down to earth commoner than Bond. Picture Ray Liotta with a British accent.

Rush is good as ever as the Tailor feeding Andy information. He is caught up in his own lies that may destroy his life and family. He is intended to be the sympathetic character here but he is such a shmuck that I found it difficult to root for him.

Jamie Lee is good again playing opposite a British lead. I was surprised that a married mother would do a nude scene, but also grateful. Yeah baby!

Unlike Scott, I did not find humor in the jokes involving the American military. I found them insulting. Intriguing plot and fine acting, but a more likeable hero and a slightly snappier pace could have done wonders for this movie. 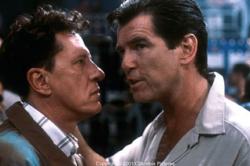 Geoffrey Rush and Pierce Brosnan in The Tailor of Panama.

Eric summed it up best when he wrote, "Dialogue moves the plot along not action". Once upon a time, back when attention spans were a bit longer, most movies were made this way. Clever, sometimes scathing quips and close-ups of smoldering looks were what movies were all about. The Tailor of Panama evokes this style. Pierce Brosnan is a latter day Cary Grant to Geoffrey Rush's Claude Rains. Jamie Lee Curtis could have been a glamorous Ingrid Bergman and she does manage to appear seductive which is no small feat considering she wears not a hint of make-up and looks her age. If only she had played the role to the hilt this could have been a classic performance. I understand the level of realism she was trying for but it seems out of place in such a romantic setting.

Pierce Brosnan has found his niche. He is superb as the cynical and selfish anti-hero. His chiseled features and impeccable charm work best when used to mask a slightly sinister personality. In The Tailor of Panama a sense of danger lurks just beneath the surface in everything he does.

For a movie to work on this level the dialogue must sparkle and stay with you long after the credits roll. That, unfortunately, is where this movie fails to live up to its promise. Still the understated manner and leisurely pace with which the story unfolds will only ripen with age. And perhaps upon repeat viewing certain lines will stand out and raise this movie to classic status. Regardless it is a commendable effort at good old-fashioned picture making.