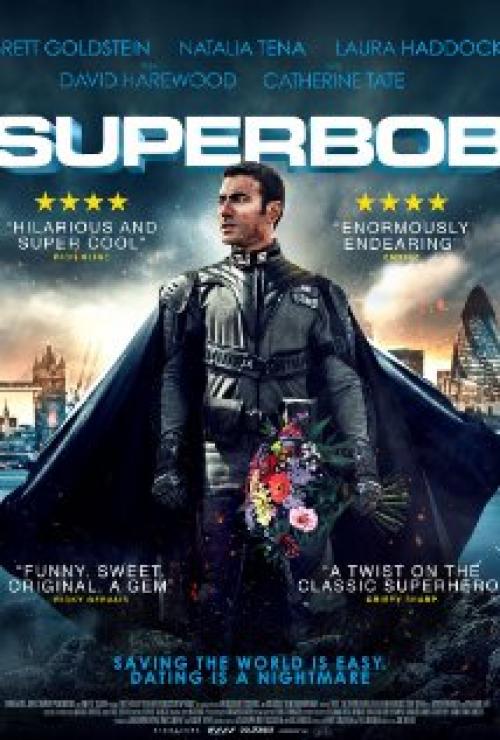 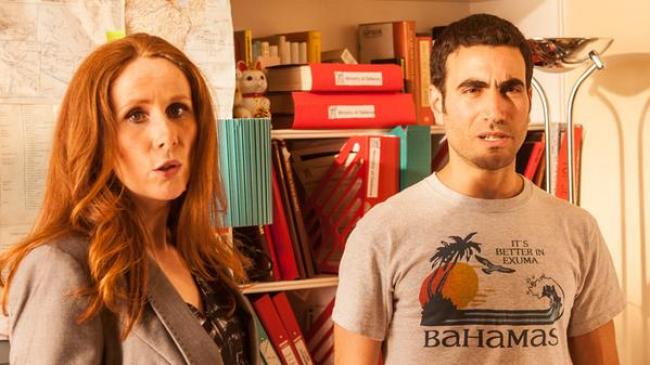 There has been such a glut of superhero movies flooding theaters these past few years that it has become impossible for me to raise more than a nominal interest in seeing them. That isn't to say that I don't enjoy them in an entirely superficial manner, because they can be entertaining, but let's face it, they're starting to all blend together and become more than a little samey. Finally, with SuperBob, there's a superhero movie that tries something different with the form. Instead of another, "the world's in peril" CGI-extravaganza, this is a small film, with limited special effects, and with nary a world threat anywhere in sight. It's a comedy, and a romantic one at that, packing in plenty of laughs and heart in its mere 82 minute running-time.

Brett Goldstein co-wrote and stars as the title character. His Bob is a very affable and diffident hero. In other words, a very British hero. The antithesis of the brash American superhero typified by Robert Downey Jr.'s Tony Stark. A former postman, Bob was struck by a meteor that granted him Superman-like powers. When the film opens, he's had his powers for 6 years and works for the Ministry of Defense, spending his days saving people and preventing crimes, all the while making sure the proper forms are signed and filed with each rescue. The only day that is his own is Tuesday, which he is supposed to get off. Instead of a fortress of solitude and a secret identity, Bob still lives in his modest apartment in the working class south London neighborhood of Peckham with only his cleaning lady, Dorris (Natalia Tena), and a union mandated security guard, for company.

The story is told in the form of a mockumentary, but very unobtrusively, rather in the style of Ricky Gervais's The Office, and takes place entirely over the course of one of Bob's Tuesday's off. He confesses to the interviewer that he is going on his first date since becoming a superhero that evening with the local librarian that he's had a crush on for several months. Bob's MoD handler, Theresa (Catherine Tate) has different ideas however, as she wants him to schmooze with a visiting American Senator who wants a photo-op. With Dorris's encouragement, Bob stands up for himself for once and intends on keeping his date, but like many a romantic comedy, and superhero movie for that matter, things don't go exactly as planned.

Much of the humor comes from Bob's very British diffidence. He has the power to change the world, but he maintains his inherent Englishness, which means he's overly polite and has a great deal of trouble expressing his emotions. He's constantly taken advantage of and abused because of his niceness. As Goldstein said in an interview on comedy.co.uk, if Batman, Superman, and SuperBob had to fight each other, "Batman would repeatedly punch Superman in the face until his hand broke while SuperBob stood near them going, 'Come on guys, we've all had a drink. Why don't we all have a cup of tea and try to talk this out?' Then Superman would turn on SuperBob and they would have to fight for hours while Batman watched. And every time SuperBob punched Superman, he would say, 'I am so sorry, I really don't want to do this, please excuse me.'"

Filmed in just 18 days, including time for some on-set improv between Brett, who is also a stand-up comic, and co-star Catherine Tate, SuperBob is proof that you don't need to spend a fortune on special effects or threaten the planet's destruction to make an entertaining superhero movie. Despite being filmed on a budget that probably wouldn't cover the trailer for an Avengers film, SuperBob is my pick for the most entertaining superhero movie of the year.

Although it's yet to receive a release in the USA of any kind, this is one movie any fan of British comedies or superhero movies in general will want to make an extra effort to see, no matter which side of the Atlantic they are on. 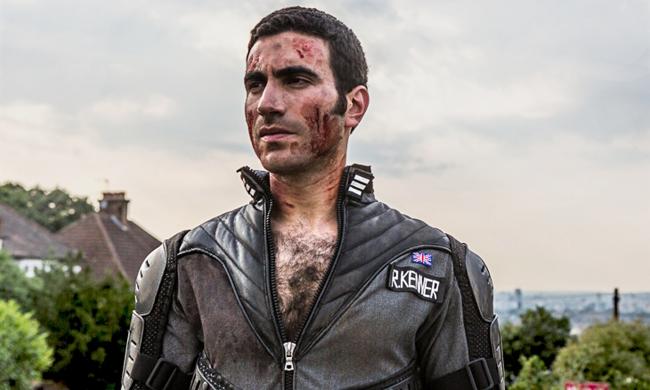 SuperBob is indeed a refreshing change of pace from the glut of over-hyped CGI Marvel superheroes that seem to multiply in number with each passing summer. Unlike those other movies, SuperBob isn't action driven at all. As Scott wrote, it's a rom-com about a guy who just happens to possess Superman-like powers.

SuperBob's super polite personality and passive nature produce some laughs. He's so polite he asks permission before leaving a conversation. The interactions between SuperBob and his neighbors are at times amusing. He's the most powerful man on the planet and yet they treat him at best as a civil servant and at worst like a mild annoyance.

Strictly speaking the first half hour stresses more of the comedy. Once the romance kicks in it becomes more sweet than satire. Although the script does poke fun at the bureaucracies of both Great Britain and the United States.

I did laugh a few times during SuperBob but I enjoyed the romance more than I did the humor. There's a scene at a nursing home where SuperBob dances with his cleaning lady Dorris that is one of the most romantic moments I've seen in a long time. The ending has plenty of heart. There's even a bit of drama thrown in for good measure (see photo).

I was unaware of Brett Goldstein until now but he's not only very attractive, he's charming and funny too. SuperBob is tall, dark and handsome on the outside but a bit of a nebbish on the inside. At least until the end of the movie anyway. Catherine Tate is hilarious as Theresa, SuperBob's boss. Her facial expressions alone are worth the price of a ticket.

Perhaps my expectations were too high, but SuperBob is neither as funny nor as fast-paced as I thought it would be. Instead it's a gently amusing superhero rom-com featuring a nice little romance and starring an appealing lead character. 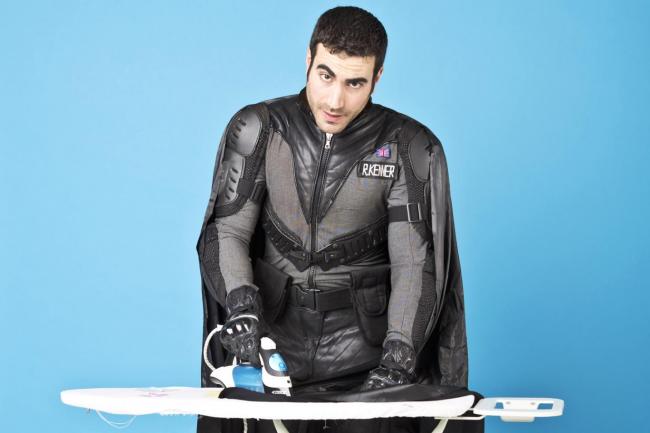 Not only does Bob possess Superman-like powers but we are given a couple of references to Man of Steel (2013). One of the most shown scenes and photos released before the 2013 Superman film was in theaters was of Superman in handcuffs being taken into custody. Here we have a scene of Bob likewise in handcuffs going along with being arrested. Instead of it being a dramatic moment, it is played for laughs. When someone recognizes Bob and calls out to him, Bob lifts his hands to wave back and accidentally breaks the cuffs in two. Also, note the Henry Cavill pose Bob is in every time he is about to fly off or land.

SuperBob is a distinctly British comedy of manners, repressed emotions and sarcasm. You cannot get any more British than an invulnerable man who can fly that allows all of the women in his life to hen peck him into submission. His boss Theresa, “Do you think I like calling you in on your day off, cause I don’t.” is as horribly self-interested as she claims the American Senator to be. His maid Doris is as outspoken as she is sexually active. As the documentary crew begins filming, she walks in to clean and asks out loud to Bob, “Have you done a shit yet?” An embarrassed Bob answers meekly, “Not yet.” Prompting Doris to state, “Then can I start in the bathroom please?” Bob’s mother berates him for not visiting more and threatens suicide because he does not have a girl, She guilts him with, “I could die today.” To which Bob whines, “It’s horrible when you say that. I really hate it.”

Although he is completely whipped, he is still extremely likable. He is proud of his neighborhood and wants little more than to be respected. Whereas everyone looks to Superman as a God like figure, SuperBob is barely even accommodated. A gospel choir tolerates his presence and a woman forces him to wait in line for her at the post office, and by force I mean asks aggressively. The only person who seems to appreciate Bob is Barry, his union contracted body guard who cannot even open a jar, making Bob’s strength come in handy whenever Barry is hungry.

As Patrick wrote, the story becomes more romantic as the film goes on and I also enjoyed the moment Doris and Bob dance. It is similar to a scene between Superman and Lois Lane in Superman Returns (2006), only more meaningful. It is easy to see where the love story is headed but it is still entertaining watching the superhero caterpillar come out of his metaphorical cocoon and find a mate.

Scott and I have always enjoyed the British sense of humor. It is more subtly absurd than American comedies. Look at the scene where Theresa tells the documentary crew her full name and job title but then adds that they cannot use any of that information. Why did she tell them if they cannot use it? Of course Bob is the stereotypical British male. Imagine a young Hugh Grant in this role. Bob is charmingly awkward but ever so polite.

As much as I thoroughly enjoyed this film, (I watched it twice) it lacks a little something at the end. SuperBob is a superhero who has just fallen in love for the first time in six years. A show of his powers and love for a certain someone could have been done in a rescue scene. It would have demonstrated the superhero side of Bob. We see him act sensitive when saving an anonymous woman but saving his lady love would have carried some weight and shown her that he is more manly than he has been treated as. I am not talking some save the world moment, just something that shows that he chooses to allow people to push him around just to keep the peace, as that is what a superhero is supposed to do.

Finally, a superhero movie that genuinely deserves a sequel.