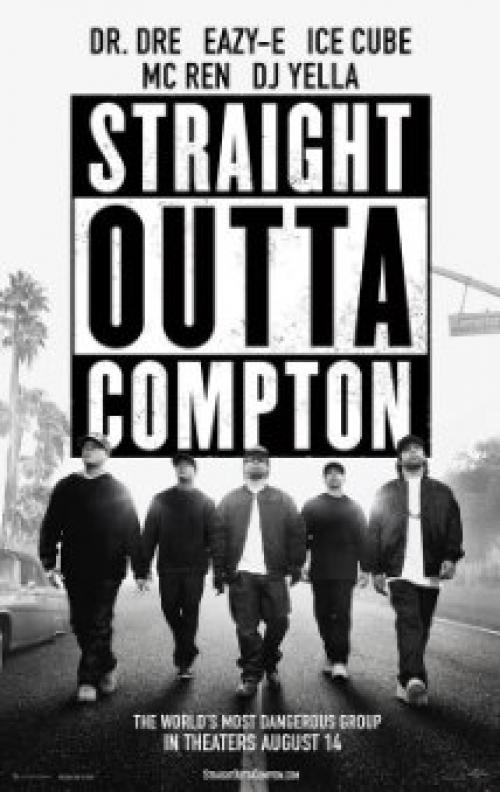 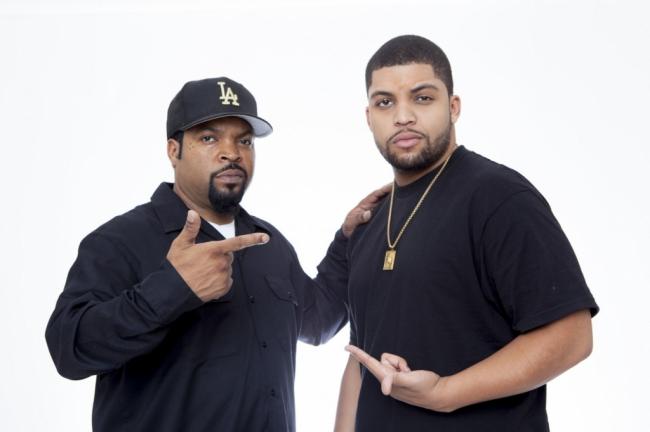 Until my sons insisted, I had zero interest in seeing Straight Outta Compton, as I have very little interest in rap music. Besides that, musical biopics all seem to follow the same generic plot. Someone or a group of someones, come from a poor background, suffers through some personal loss, reaches heights, falls from grace and then comes back. Fanny Brice, Billie Holliday, Loretta Lynn, Elvis Presley, Ray Charles, Patsy Cline, Tina Turner, Johnny Cash and so many others all follow this pattern and NWA fits right in, only with more swearing.

Here we meet three young men and two of their friends as they form a rap group that would become the world’s most famous gangster rappers. They all come from the poverty stricken town of Compton. Eric, Eazy E, is a drug dealer who hangs with even bigger dealers. Andre, Dr Dre, is the positive one who encourages the others. O’Shea, Ice Cube, is the sensitive one who writes poetry on the school bus and the group’s rap lyrics.

Through their tenacity, these five young men forge ahead and break new ground in pop music. (All popular music is pop music) They rap about their life and hardships, using the slang and curse words they were raised on. It offends many but also speaks to those who can relate and others who emulate their bravado. Their real trouble begins with the song, “Fuck the Police.” They make national news and some people protest.

Ice Cube states at one point, “Speak a little truth and people lose their minds.” It is the film's best line but I must point out that this film is told from NWA’s perspective. They spoke the truth as they saw it. There is a scene (see photo in Patrick's review), which reportedly really happened, where the guys are outside a recording studio simply talking when the police show up and harass them, making them all lie face down on the sidewalk, before letting them go at their manager's insistence. I can guarantee you the police have a different memory and version of that occurrence.

The performances are all round good as they make these very well rounded characters. I simultaneously rooted for and disliked these guys. I wanted them to make it but they all make many bad decisions and their tempers often get the best of them. The best part is that we see these guys grow. They all have social limitations from their upbringing. However, they learn through trial and error.

They stand by their offensive songs that insulted others but later get upset when they are made fun of in other’s songs. They could dish it out but had to learn to take it. By the end of the film both Dr. Dre and Ice Cube both have children with women they are still married to today. These thugs, who upset a nation, just wanted the American dream, a nice livelihood and a family. One scene is particularly interesting as it features Ice Cube, played by his son, while in the background is an actor playing him as a child.

In the grand musical scheme of things, NWA was merely just one of many musical acts that shocked people. Elvis Presley shaking his hips, The Beatles long hair, The Rolling Stones hotel antics, Prince’s sexual lyrics, Madonna’s nudity, Boy George’s androgyny, George Michael coming out of the closet and all the drugs so many have done and died from. For me, the most honest moment in the entire film is when NWA gets arrested after performing “Fuck the Police” and inciting a riot. They yell and curse at the cops while fans and cameras look on. After they get thrown in the back of a police wagon they laugh their asses off knowing what this publicity will do for their careers. 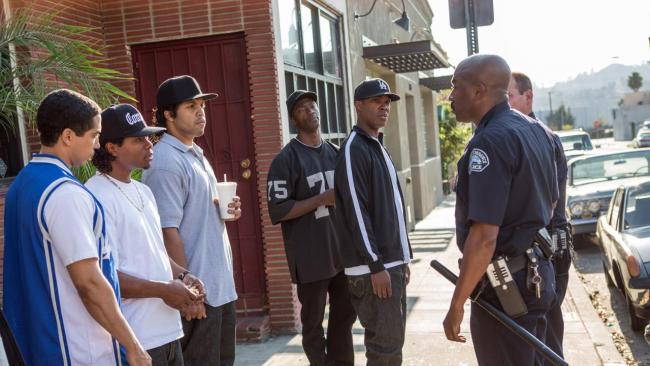 N.W.A. face off with LAPD in Straight Outta Compton.

As my brother noted, Straight Outta Compton follows the familiar biopic formula he described in his first paragraph. The success of any movie in this genre relies on three main things; the talent of the individual(s) being portrayed, how interesting their rise to fame was, and how well the characters and time era are recreated. In this case Straight Outta Compton scores high in all three categories.

The music produced by N.W.A., and its individual members as solo artists, influenced a generation. Check. Their rise from one of the most notorious neighborhoods in the country to the very pinnacle of popular culture was meteoric and volcanic. Check. The fact that Ice Cube, Dr. Dre, and Eazy-E's widow, Tomica Woods-Wright, all served as producers certainly adds to the film's accurate 1980s/90s atmosphere. Shot on the mean streets of Compton it looks and feels authentic. Check.

I agree with Eric about the cast. Everyone in the movie does a fine job but it's the three main characters that, not surprisingly, stand out the most. O'Shea Jackson Jr., Corey Hawkins and Jason Mitchell as Ice Cube, Dr. Dre, and Eazy-E, respectively, all manage the difficult task of playing a famous person without merely doing an impression of them. Of course it helps that they used the real music of N.W.A.

Like any good movie it has a nice mix of the comic and the tragic. The scene where Eazy-E first attempts to rap is hilarious. Later there's a nice homage to one of Ice Cube's biggest movie hits, Friday (1995). He is shown briefly writing that movie's most famous line, “You got knocked the fuck out!” And in one scene when they kick a naked woman out of their hotel room, Cube calls after her, “Bye, Felicia!”

The tragedy comes in the form of Eazy-E's illness and untimely death from AIDS at the age of 31. Here the script goes for dramatic license by showing both Dr. Dre and Ice Cube having melodramatic deathbed scenes with Eazy. Neither of which happened in real life. Ice Cube didn't visit Eazy in the hospital because he wanted to remember him as he was. Dr. Dre went to see him but arrived too late. I guess in a way this movie is their chance to rectify history and to finally say a proper goodbye to their old friend and group mate.

One criticism of the film is the fact that while it includes Snoop Dogg, Tupac Shakur and Warren G, none of the female artists that played a part in the story of N.W.A. are depicted. Singer Michel'le not only had several hits produced by Dr. Dre, she also bore him a child, yet she rates just a single mention. The all-female rap trio J. J. Fad was one of the first acts signed by Eazy-E's Ruthless Records. In 1987 they had the huge rap hit “Supersonic”. Their success was a steppingstone for N.W.A. but they got left out of the story entirely.

Despite its flaws Straight Outta Compton is entertaining and compelling. It may be a by-the-numbers musical biopic but after spending its first three weeks atop the box office heap it's now the highest grossing biopic in Hollywood history. As far as success is concerned, at 46 and 50, Ice Cube and Dr. Dre continue cruising down the street in their 64. 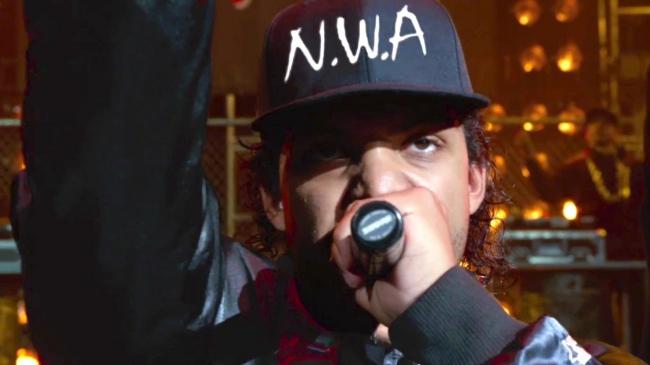 Like Eric, I had no interest in seeing this movie. I was never a fan of N.W.A. or any of the solo careers it spawned. Were it not for the controversy generated by, "Fuck the Police", I wouldn't have been able to name any of their songs. Also, I will happily join the queue to say that once you've seen one musical biopic, you've pretty much seen them all. However, it must say something about this movie that considering all that I still actually enjoyed it.

As with most musical biopics, it's the rise of the artist that is the most entertaining. As Patrick said, the rise to fame has to be interesting and with these guys it is. Of course it's one sided, as Eric noted. Every policeman portrayed in the film seems to be a racist bully, which is just as much of a stereotype as portraying all young black men as gangstas. But this is N.W.A.'s story and not the police's, so they can tell it as they remember it. In any case, these guys used their skills as writers, producers, and rappers to rise above their humble backgrounds and make something of themselves.

The cast is as good as my brothers wrote. These guys don't always do the smart thing or the right thing, but because of the talented and likable cast of actors, you never really stop rooting for them. What's interesting about this group is that although they wrote about and symbolized the gangsta lifestyle, none of them were really all that gangsta. They grew up surrounded by that lifestyle and sang about it, but Ice Cube and Dr. Dre, in particular are portrayed as fairly straitlaced, and given that they were easily the most talented of the group, it's probably safe to say they devoted more of their energy to their careers than to breaking the law. O'Shea and Corey Hawkins do a great job portraying thesm. Giamatti is also good as the slimy music manager, even if he does come across as a bit of a cliche.

Although I could be wrong, I'm going to assume that drugs were more frequent in real life than was portrayed in the film. It's just the nature of the music business that they were probably present on more than one occasion, especially while the group was touring. However, what's interesting by its absence from the storyline is the drug addiction/overdose incident that is so usually featured in these types of films. It's actually refreshing by its absence.

As Eric wrote, ultimately N.W.A. was one in a long line of musical acts who shocked the establishment and the establishment, as it always does, obliged them by being shocked. Eric, liked the scene where the guys react after the riot, but I thought an earlier scene was equally telling. The tour bus passes a group of people destroying a pile of their albums and cassettes. While the rest of the group looks shocked, Eazy-E wisely points out that the crowd can do what they like since they already bought the record dozens of times to destroy it. Whether you agreed with their songs' sentiments, felt that they were exploiting a lifestyle to sell records, or that they were out to destroy society, as they point out several times in this movie, they still had the right to free speech.

While the group's rise to fame is the film's most entertaining section, eventually the story runs long. They use Eazy-E's death as the logical end of the film, but the portion before that drags on for too long as the band members go their separate ways. Too much time is spent on the bickering between the competing record companies and who's under contract to whom. The story of N.W.A. didn't need to be 2 and a half hours long. A tighter edit in the third act would have definitely helped keep my interest more, which to be honest was starting to drift by the 2 hour mark.