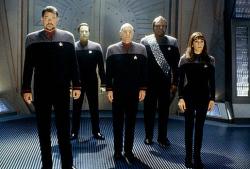 My most common complaint about the Next Generation movies is that they often seem more like extended episodes from the television series than they do like movies.  Never is that more true than with Star Trek IX.  It contains a few nice character moments, but the central plot seems rather tame.  In the previous film the crew was saving the Earth, this time around they're preserving the hippy lifestyle of 600 people.  It's not exactly the stuff of legend.

The gist of the plot has the Enterprise travel to a planet hidden in some kind of cloud to investigate why Commander Data, who has been temporarily assigned to monitor the planet, has gone berserk.  Turns out that the planet's rings generate a radiation that acts as a fountain of youth.  Certain members of the Federation, partnered with a race known as the So'na, plan to remove the 600 inhabitants of the planet so that they can harvest the radiation.  Picard objects to the plan and defends the planet while Riker takes the Enterprise to alert the Federation Government and Starfleet to exactly what is happening.

Like the best of Star Trek, this movie tries to present a question of morality.  Picard asks, how many people have to be displaced before it becomes wrong.  Comparisons could be made to the forced removal of Native Americans from their lands.  The only problem with this is that, while I disagree with their methods, I actually agree with the intentions of the So'na and the Federation members working with them.  Why should immortality be limited to just these 600 people?  Is preserving their hippy dippy lifestyle worth the cost of billions of lives?  Instead of just removing them though, or even worse, killing them, shouldn't they be trying to work out some kind of compromise?  And shouldn't these supposedly superior  people be willing to share their unique gift?  It's not even as if it were their planet.  They migrated there 300 years ago.

Frakes does a decent job directing again, but the script is weak.  They do throw in some  nice scenes for the characters.  Due to the regenerative power of the planet's radiation, Geordi gets his eyesight back and Riker and Troi renew their relationship.  Another excuse is found to bring Worf back onboard and he provides a few moments of comic relief as he starts to experience Klingon puberty.  Data's quest to be more human seems increasingly tired as it's trotted out one more time.  Spock found peace with his nature in the later films, couldn't Data as well?  Only poor Beverly Crusher is left with nothing to do except mention how her boobs are firming back up.

Star Trek villains have never been the movies' strong point.  Khan and the Borg Queen are probably the best they've produced.  F. Murray Abraham as Ad'har Ru'afo is certainly one of the weakest in all of the movies.  He is written as a whiny and spoiled child who reminded me a bit of Daffy Duck and you expect him to jump up and down screaming, "Mine, mine, mine" at any point.

After being involved with seemingly a series of diplomatic missions, Picard asks near the beginning of the movie, "Remember when we were explorers?"  My answer is, Yes.  Yes, I do.  I remember when the Enterprise's mission was to explore strange new worlds, to seek out new life and new civilizations and to boldly go where no one had gone before.  There's nothing strange, new or bold about this movie and we definitely don't go somewhere we've never been before. 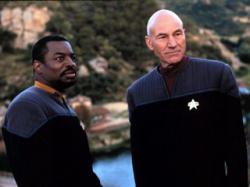 I agree with Scott that with the small amount of plot on display here, it definitely could have been shrunk into an hour episode. The Federation wants to relocate some people so as to mine a natural resource. Hell, they may have been able to even get the point across in a half hour.

As a fan of the original Star Trek cast I am likely biased, but I have never come to like these characters as much as the original cast. Star Trek: The Next Generation was written with a great effort to give the crew personalities and personal relationships.  Some of the crew members even became very intimate.  Yet, the chemistry between the main cast never became as easy going and delightful as that between Kirk, Spock and Bones.

With that said, I watched this film with very little invested.  In an early scene we see Data acting in a way that makes him a bad guy. How is that exciting?  He is an artificial life form. Clearly someone has made some adjustments to his mechanics.  We know how that can be fixed. I also noted in these early scenes where Data is flying some craft, how amateur the computer graphics are. My video gaming teenage son passing through the room, asked, "How old is this movie?"  What I found out was that this was the first Star Trek movie where computer-animation was used for shots featuring space ships and not models.

Scott called the writing weak, and I agree. What passes for humor is Picard having to wear a silly looking scarf on his head, given to him by a foreign dignitary and Worf getting Klingon acne.  The population of 600 people seems a bit low.  With everyone staying in their twenties and thirties for 300 years and no sign of condom manufacturing or natural predators, I would think the population would have been much greater.  What else do these peace nicks have to do but grow veggies and have sex?

There is no tension to be found in this entire film. We know Picard is right and that he will prove his point by the end of the film, with a scene featuring Data that will be intended to be cute but will fail miserably. As Scott asked, where is the discovery? This planet should have been found by the Enterprise, where they all discover a sexual reawakening, creating all kinds of humorous possibilities. The planet could have then become threatened by some outside force that followed The Enterprise there, giving an excuse for some space battles as well as shoot outs on the planet.

Star Trek IX: Insurrection is for Next Generation fans only, and judging by Scott's review, maybe not even them. 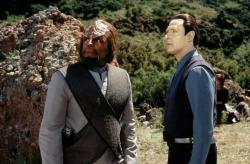 I've seen only a few of the Next Generation movies and a handful of its television episodes but what struck me about this movie was that it reminded me of an episode of the original series. And I mean that in a good way.

I enjoyed this simple movie. I don't expect action packed space battles from Star Trek. It's always been more about the crew exploring newly discovered planets and learning about different cultures. Yes this planet isn't all that exciting or unusual but it is a new world so I'm not quite sure where Scott's complaint about them no longer exploring comes from.

The entire setup, including the quaint look of the Ba'ku village and the fact that these people have discovered a fountain of youth, seems like it could be taken from the first Star Trek series. Plus the fact that Picard begins a romance, which is very much like Captain James T. Kirk, and Data discovers how to play, something that could easily have been a plot device used for Mr. Spock.

The movie even throws in a twist in the connection between the Ba'ku people and the So'na race. If you want to know what it is you'll have to watch the movie.

As much as I enjoyed Insurrection, I do have to agree with Eric about the ending. In the very next Star Trek entry, 2002's Nemesis, Picard will once again do battle with the bad guy aboard a space ship that is about to explode and he will get teleported to safety at the very last possible second. I sense a pattern here.

I've never been even remotely close to being a Trekkie and perhaps that added to my enjoyment of this movie. Like Eric I had no preconceived expectations. It is far from great but I found myself easily caught up in the story and invested in the lives of the Ba'ku people and their “hippy dippy” lifestyle. I even got a bit choked up when LaForge sees his first sunrise; and how many movies can successfully incorporate an operatic selection from Gilbert and Sullivan?