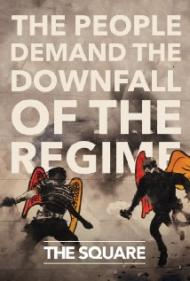 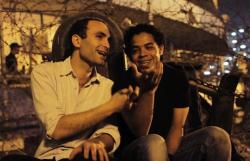 Khalid Abdalla and Ahmed Hassan in The Square

I recall hearing the reports on the news of the Egyptian protests and revolution. It was reported as expected. When Obama said he supported Mubarak being ousted, all of the main stream media backed him while the right wing organizations stated it was a mistake as this would allow the Muslim Brotherhood, with its extremist ties, to gain power.

This documentary gives details the news did not divulge. It covers several years and shows how a country divided can only lead to chaos. The initial protesters were, as shown here, mostly young idealists who wanted President Mubarak out and the hopes that a new government would allow them greater freedom. It centers on a handful of people who protested mostly peacefully, gathering in a square in Cairo. None of them are shown to be overly religious.

The group features men and women. One of the men is a locally famous singer and another is an international movie star. The most interesting one, to me, is a man who seems to change sides with the wind. He is with the Muslim Brotherhood, and then he is not and then he supports them. Later we see that he has children and we understand that this man is first and foremost a survivor.

After the initial protests, the Muslim Brotherhood joins in. You can spot them a mile away as the original protestors dress like westerners while the Muslim Brotherhood dress in traditional attire and have organized prayers during the protests. The original protestors do not want them there but with their presence the protests become successful and Mubarak is out and a quickie election is created.

Just as in this country, everyone is out for what they can get. The political opposition wants power. The military wants power. The people want power. The big difference shown here is that the original protestors invited Muslim, Christian and secular people to gather and protest for a better Egypt. The political parties are extremely exclusive, concerning themselves with their power more than anything or anyone else. The Muslim Brotherhood likewise is only concerned with forcing Islamic doctrine onto the people, whether they want it or not.

You have to admire these individuals who are up against so much authority, power and arrogance. The only weapon they had were cameras and the internet to show the world what was happening to their country as they saw it. This film did not open my eyes to geopolitics but it reminded me how very personal it all really is. Without people, governments and religion have no power and when the people fail to be heard, a revolution is necessary.

Ahmed Hassan in The Square.

In the fall of 2011 the United States' media reported on the protests in Cairo's Tahrir Square with a sense of elation and hope. The idea that a peaceful grassroots movement could topple a fascist regime in a majority Muslim Middle Eastern country and possibly set the foundation for a democratic society would have been unthinkable just a few years earlier. But now, nearly three years after the initial protests against Mubarek's regime, this revolution remains an ongoing struggle.

Director Jehane Noujaim is Harvard educated and of Egytian and American descent. She has created an astonishingly intimate portrait of that struggle. Like the movement itself this film is disjointed and chaotic. It builds in intensity as the violence against the protesters escalates. As one corrupt regime is replaced by another a sense of frustration grows among the various protesters. Eric wrote that all of these opposing groups desire power and that is technically true. He mentioned the fact that the original protesters welcomed a religiously diverse group to their cause. Another major difference between Mubarak's regime, the Muslim Brotherhood under Morsi, the Military (that denies beating and shooting protesters in the face of overwhelming evidence to the contrary), and the majority of the peaceful protesters is that the latter group alone wants personal freedom and democracy; something hitherto unknown in Egypt's long history.

As this Oscar nominated documentary so vididly demonstrates, modern technology has given the people a new weapon in the form of phone cameras and the internet. The old adage that a picture is worth a thousand words has rarely been better illustrated or put to a more powerful use than in this struggle. What could be a more persuasive argument for a cause than showing someone actual video footage of peaceful protesters being beaten and shot on the streets? It worked here in the United States during the Civil Rights Movement of the 1960s. Television news reports featuring clips of police dogs and fire hoses being turned loose on peaceful African-American protesters mobilized complacent American citizens against the evils of the Jim Crow South.

Amidst all the conflict, confusion and chaos, The Square ends -like it began- with a sense of hope. As Khalid Abdallah admits, it will take decades for the desired results of this movement to materialize. The fruits of their labors may not take full bloom for years to come but at least the seeds of freedom have been planted, and are continuing to be sown. Near the end of the film we hear these eloquent words from revolutionary Ahmed Hassan (see photo), “We're not looking for a leader as much as we're looking for a conscience. What is a leader anyway? Are they going to offer solutions from the heavens? They won't do that. The thing is, if we are able to create this conscience within the society, we'll be able to find a good president. We are not looking for a leader to rule us.”

The Square is a truly amazing film that should be seen by all who value freedom.