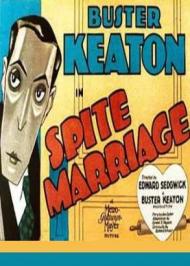 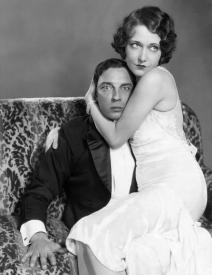 Spite Marriage was Buster Keaton's last silent film. This was the last time he was given any credit for directing or having much creative input into a film beyond being an actor. Leaving his independent film making and being an employee of MGM would be something he would later call the biggest mistake of his career. Judging by the quality of Spite Marriage, it certainly was a mistake.

Keaton plays a man named Elmer, who works at a dry cleaners. He wears the nice suits that rich men drop off for cleaning. He stalks a famous stage actress, Trilby, showing up everywhere she does. He has seen her play 35 times. Because of his nice clothes he wears, Trilby assumes Elmer is wealthy.

At one point Elmer goes backstage to give Trilby some flowers but ends up in the play standing in for an actor whom the cops are after. Elmer messes everything up, creating quite a bit of laughter from the audience. His antics are not nearly as funny as they lead on.

Trilby is in love with a co-star, who is meanwhile in love with a socialite. Out of spite, Trilby decides to marry Elmer whom she barely even knows. She regrets it immediately and does not have relations with Elmer on their honeymoon. She gets drunk when she sees her old boyfriend and his girlfriend at dinner. Elmer has to carry her back to their room and put her to bed in a scene that drags on endlessly. Their marriage seems over as her manager encourages Elmer to give her a divorce.

Elmer then gets caught up with some rum runners and ends up at sea. He eventually ends up on a yacht that just happens to have Trilby and her old boyfriend as passengers. The bad guys show up and Elmer has to be the hero. They survive a storm. He rescues Trilby and saves their marriage. Trilby has this double meaning last line to him, as they go into their apartment building, "You will be seeing a lot more of me from now on."

Spite Marriage is a lesser comedy of Keaton's. There are few jokes and what there are drag on pointlessly. Keaton messing up the play is one little screw up after another, and none of them are that funny. When Trilby gets drunk, it seems to take forever for Keaton to get her back to their room and into their bed. It is supposed to be a funny scene but I could not wait for it to end. Spite Marriage was the beginning of the end of Keaton's career as a major motion picture star. 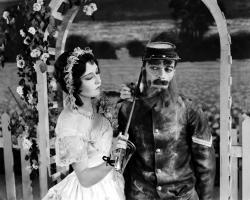 Eric is a bit harsh on this final silent movie in the great Buster Keaton's career. Sure it's far from his best work but it still contains some quite funny bits. Buster's original idea had been to make a talkie comic western costarring Marie Dressler. Sounds interesting, but the idea was vetoed by Irving Thalberg. It was also Thalberg who insisted Spite Marriage be shot silent even as the industry was rapidly converting to sound. The one concession to this fact is the inclusion of sound effects and laughter.

I agree that the whole “Civil War Play” storyline is pretty mediocre. Keaton's antics during it aren't all that clever or humorous, although it does set up the punchline for the movie's climax. The putting the bride to bed scene, though, is quite funny, and despite Eric's complaint, it lasts less than five minutes. In fact it would become Keaton's last classic silent movie bit. It was so popular that Keaton later performed it onstage with his third wife Eleanor Keaton, and it was reenacted by Donald O'Connor in The Buster Keaton Story (1957). It was also copied by Gregory Peck putting Audrey Hepburn to bed in Roman Holiday (1953). Dorothy Sebastian deserves much of the credit as she handles the physical comedy like a pro, allowing Keaton to drag her about the room like a rag doll.

By far the most enjoyable aspect of the movie is the climax that takes place on a boat (Keaton's personal yacht was used). It turns into a fast paced adventure yarn at this point, where Keaton must rescue his spite bride. I cracked up at the technique Trilby uses to lure the unsuspecting men on the boat into a position where Elmer can hit them over the head with a bottle. She poses with one leg out and a hand on her head and gives them a saucy look. It is quite funny.

Elmer and the bad guy have a great final battle, as the much larger villain repeatedly attempts to throw Elmer overboard. Elmer keeps managing to get back aboard the boat and finally succeeds in knocking the bad guy out. Trilby looks at him and exclaims, “Oh Elmer, you're wounded.” Reverting back to the play from earlier in the movie Elmer stoically replies, “A scratch is nothing to a Southern gentleman!” before passing out.

Edward Sedgwick must have had a decent working relationship with Buster. He had already directed Keaton in The Cameraman and they would make seven additional movies together – all of them talkies. Spite Marriage is neither the best nor the worst of Buster Keaton's silent comedies. But it was the end of an era. 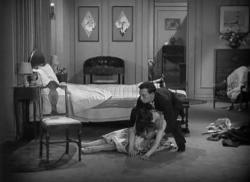 I definitely side with Patrick on this one. While it's not Keaton's best, it's not nearly as bad as Eric states. There are several quite amusing scenes and Keaton remains as likeable as always.

Patrick mentioned the two funniest scenes. Keaton's wrestling with a passed out drunk Dorothy Sebastian is certainly the highlight of the film. I particularly enjoyed the ingenious method with which he positions her on a chair to raise her to a sitting position. Reportedly, the easy intimacy the two share in this scene can be attributed to the fact that they were having a love affair off camera. Likewise the final battle between Keaton and the bad guys is very well done, including the moments Patrick mentioned when Sebastian (who seemed to be doing her best to look like Gloria Swanson) lures the men down the corridor so Buster can knock them out. And as Patrick also mentioned, the differences in size between Keaton and the head villain makes for a comical final fight. Keaton is like a cat in this scene, clutching the bad guy and always managing to cling to something after being thrown and claw his way back into the fray.

Although it's interesting that Keaton wanted to make a talkie and would eventually do so, the technology at the time this movie was shot would have severely limited his physical antics. There's no way the large and clunky sound cameras of the era could ever have captured the final frantic scenes onboard the ship, for example. Still, there are scenes in it that could have included sound, such as the scenes on stage. In any case, despite the advent of sound, this movie was still a financial success.

I was intrigued by Patrick's mention of director Sedgwick's relationship with Keaton. Sedgwick began his career as a comedian. His love of baseball helped spark a friendship with Keaton that would last a lifetime. The two of them would share an MGM office for many years, well into the 1940s, as the two of them remained on the studio's payroll long after their golden era had ended.

Being Keaton's final silent film, it would be nice if I could write that it was classic. While I can't say that, it is lightly amusing. The Great Stone Face may have made better films, but even this lesser effort still contains some comic gems.