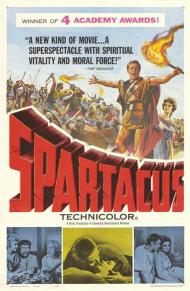 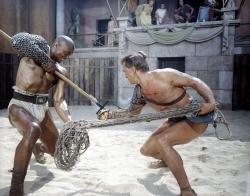 Spartacus tells the story of a Greek slave forced to become a gladiator who then leads the most successful slave revolt in the history of Rome only to wind up as a crucified martyr. Set in the 1st Century B.C. (Julius Caesar is a young Roman nobleman) Spartacus is noteworthy for several things.

First, it features some very fine acting, something that is not always associated with this type of sword and sandal epic. Kirk Douglas is great in the lead role and he is given impeccable support from the likes of Laurence Olivier, Peter Ustinov, Charles Laughton, Jean Simmons and Tony Curtis.

Second, Spartacus offers Technicolor proof that the nineteen-sixties began the true evolution of movies from classic to modern. Released the same year as Hitchcock's Psycho (1960), Spartacus was one of the first big-budget Hollywood movies to show gore as entertainment. But then it was directed by a young Stanley Kubrik so that shouldn't come as much of a surprise. Although tame by today's standards it has its fair share of bloodshed. In one scene General Crassus (Olivier) kills a gladiator who has turned from the ring and tried to climb up to the spectators. There is a close-up of squirting blood that lands right on his face. Later in a battle scene a man's hand is chopped off with a sword, the stump is shown spurting blood. DeMille never showed history this graphically.

Third, this is one of the first movies to feature an intentionally and openly homoerotic scene between two male stars. Laurence Olivier is taking a bath with the help of his slave/houseboy Tony Curtis. At one point Olivier starts talking about how some men like oysters and some men like snails, and how it is only a matter of personal taste. He goes on to say that he likes both oysters and snails. It is fairly obvious what he really means.

Russell Crowe's Gladiator lifts several ideas directly from Spartacus but take my word for it, this is by far the better movie. Spartacus may not be as well-known as Ben-Hur or The Ten Commandments but it deserves to be. 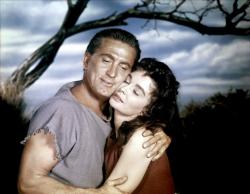 Kirk Douglas is great in the lead role as long as you do not consider that he was far too old for the part. Douglas was 44 years old in 1960 and could have passed for a well preserved 50. The real Spartacus died when he was 38. In the classic Roman era, in which this movie takes place, the life expectancy was 45-47 years. Douglas would have been considered an old man, not a gladiator prospect. It would be like today having a 65 year old training for an MMA fight.

Although Douglas is in decent shape, he is not convincing in the role. He seems to be holding his stomach in whenever shirtless. Most of the Roman men have hair with bangs cut in the fashion that we have seen on Roman busts. Douglas’s hair is cut more in a traditional matinee idol style of the late 1950s. I never saw a comb and mirror in any of his cages but he is always well coiffed.

Patrick mentioned how frank this film was with gore and homosexuality, while it was also quite direct with hetero-sex. Early on, female slaves are sent to the gladiators cells to have sex with them. Spartacus tells his potential sex partner, Varinia, that he has never been with a girl before. The idea being that Varinia comes to like Spartacus because he does not take advantage of her. I would have bought that scene if Spartacus was played by a 20 year old instead of a man knocking at death’s door.

Although Douglas was not physically right for the part, he does a decent job of acting. One of my favorite scenes is when he sits in a cage with another gladiator he is about to fight. They listen to the current fight going on, all the while knowing that one of them is expected to kill the other when it is their turn. Although he is clearly nervous, he puts on a brave face.

Much of this film was shot on location in Spain, and those scenes look so much better than the ones filmed on a soundstage. There is more than a touch of irony when the gladiator slaves first revolt. These men over took and killed men who taught them to fight. If they had not trained them so well, they may not have had such a successful escape. Of course, who can forget the classic scene where the men stand and shout, “I am Spartacus!”

This film has many great philosophical lines. Spartacus explains the revolts success rate with, “Death is the only freedom a slave knows. That's why he's not afraid of it. That's why we'll win.” Another good line of his is, “And maybe there's no peace in this world, for us or for anyone else, I don't know. But I do know that, as long as we live, we must remain true to ourselves.” Peter Ustinov has my favorite line, “A good body with a dull brain is as cheap as life itself.”

Spartacus has much to offer but loses its way far too often when it focuses on Roman characters that do not all directly relate to Spartacus. This is a long adventure film but much of the action scenes are referred to instead of shown. All of the people under Spartacus are angry criminals of the state. No doubt their marauding led them to kill, rob and rape many innocent people, yet we are only shown them as nice, happy people hanging out in a camp being entertained by Tony Curtis.

As Patrick mentioned, Spartacus was a mature movie for the time, it was however, not as mature as it needed to be. This is a story of violence, freedom, politics and sex. It could use an honest remake with an age appropriate cast and an “R” rating.