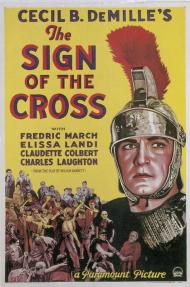 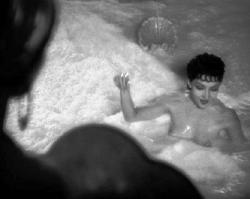 Claudette Colbert bathes in asses' milk in Cecil B. DeMille's The Sign of the Cross.

The Sign of the Cross is a big old-fashioned epic as only Cecil B. DeMille could make.  It takes place in Rome in 64 A.D. and is filled with sights and spectacle and features a cast of, if not thousands, than at least hundreds.  It also benefits heavily from and gets away with things because of it being released prior to the Hays Code being enforced.  It was the Caligula of its day.

As the movie opens, Nero (Laughton) is playing the lyre while Rome is burning.  To avoid rumors that he started it, he puts the blame on the Christians and offers a reward for every Christian captured.  It works according to plan until Marcus (March), the Prefect of Rome, falls in love with Mercia, a Christian girl (Landi).  This doesn't sit well with the Empress (Colbert), who lusts after Marcus.  She conspires to have Mercia put to death in the colesium along with all the other Christians.  Will Marcus be able to save her?  And will he understand the depth of her belief and what she's prepared to do for it?

DeMille's speciality was spectacle and there's plenty of it on display here.  The final half hour of the movie is nothing but spectacle.  It takes place in the arena and features battling gladiators, midgets fighting amazons, a woman being eaten by alligators, another woman being stalked by a gorilla, and Christians being fed to the lions.  Even before the giant finale though, the sets and the costumes are quite elaborate and there is plenty to look at, especially in the pristine, restored edition of this movie that is now available.

Unfortunately the performances aren't as good as the sets and art direction.  Most of them are rather hammy and over dramatic.  I would blame the time period since in the early 30s, there was a tendency towards melodrama, but if you watch later DeMille epics, like 1956's The Ten Commandments, the acting is just as over-the-top as it is here, so maybe DeMille is more to blame than the period.  Only Colbert as Poppaea manages to restrain her performance and she subsequently steals every scene that she's in.

There are several scenes that caused the filmmakers trouble with the censors, but were kept in the film since there was no real way for the Production Code to be enforced at the time.  When the movie was rereleased a few years later, after the Code, these scenes were removed.

The most famous of these scenes is Colbert bathing in asses' milk.  There's no actual nudity, but you can definitely tell that she is naked as her breasts float on the milk, coming within an eyelash's breadth of revealing nipple.  The scene ends when Poppaea tells another woman to take her clothes off and join her in the bath and the camera pans to the woman's legs and you see her skimpy dress fall to the floor.

There are several other shocking for the times scenes.  At one point one woman dances seductively while she caresses another woman in an attempt to warm her up to Marcus' advances  Later, a nearly nude woman is tied to a stake as a gorilla approaches her in the arena (since gorilla's aren't meat eaters, I guess it's up to you to decide what he's going to do with her).  Nero, played very camp by Laughton, keeps a naked male slave beside him while he watches the debauchery at the arena.

You certainly could never accuse DeMille of not giving audiences bang for the bucks and this movie is no exception.  Even at this movie's weakest points, it still manages to entertain by the sheer volume of images he throws on the screen.  He was the master of the religious epic and is hardly likely to ever be topped. 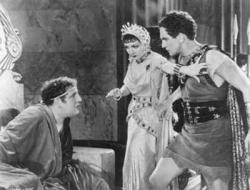 Charles Laughton, Claudette Colbert and Fredric March in Cecil B. DeMille's The Sign of the Cross.

The scenes of carnage in the arena contain real shock value. Scott you didn’t mention the elephants. They pick up Christians with their tusks and one steps on a man’s head. And the scene where Mercia’s little brother Stephan walks up the steps into the arena is quite gory for its day. We see several lions in the process of devouring Christians. In an earlier scene Stephan gets tortured off camera while we hear his screams of agony.

The sexual innuendo is also pretty out there as Scott wrote. The scene where the prostitute Ancaria (whom Marcus calls the most talented woman in Rome) dances and chants seductively around Mercia to get her in the mood is over-the-top camp as only DeMille could do. She winds up competing with the Christians singing praise to their God out on the street as they are marched off to certain death at the arena. As the Christians sing louder so does Ancaria until she eventually gives up in angry despair.

The Sign of the Cross was based on a stage play first performed in 1895. At one point Mary Pickford owned the rights to it but I can’t imagine her ever appearing in a movie like this. As Scott mentioned DeMille was the perfect choice to direct as he made Biblical epics better than anyone else in Hollywood. He was a master at reveling in all the titillating debauchery he could get away with while at the same time maintaining a certain pious attitude throughout.

This movie would never get made today (except maybe by Mel Gibson) as it paints a very positive view of early Christianity. They are all persecuted martyrs being hunted and slaughtered mercilessly by the hedonistic Nero and his Roman army. The ending is as uplifting spiritually as it is tragic physically.

I only disagree with Scott about the performances. Biblical epics are supposed to be dramatically heightened. Everything about them is larger than life including the human emotion on display. I agree that Claudette Colbert (in her first role as a wicked woman) steals all her scenes, and I’m pretty sure I did catch a glimpse of nipple in the ass’s milk bath scene. I thought Fredric March was equally good as Marcus.

But make no mistake; it is Charles Laughton (playing to the balcony) that walks away with the top acting honors. Billy Wilder called him the most talented actor he had ever worked with, saying he could come up with 20 different and equally brilliant ways of delivering any line of dialogue. His opening scene really sets the tone for the entire movie as he parties while Rome burns in 64 A.D. He makes it quite clear in this brief scene that Nero is both insane and homosexual. Laughton himself was gay and he apparently made Fredric March very uncomfortable by constantly trying to look up his toga. But that’s neither here nor there.

The Sign of the Cross is a great pre-Code sword and sandal epic from the all-time master of the genre. DeMille, more than any other director, defines the classic Hollywood era. From 1914 to 1956 he was Paramount Studios greatest filmmaker. He saw the industry change from silent to sound, from black & white to Technicolor, as well as the advent of widescreen technology. He adapted with the times while never losing his larger-than-life sensibilities as a director. When he died in 1959 it was truly the end of an era. This is one of his best movies. 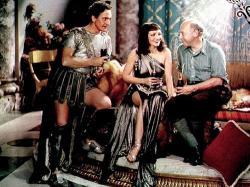 Fredric March, Claudette Colbert and Cecil B. DeMille on the set of The Sign of the Cross

Cecil B. DeMille was known as a difficult director to work for, especially when it came to doing stunts. Gloria Swanson loved to tell the tale of how he required her to do a scene with a real lion in Male and Female (1919).  During the filming of Samson and Delilah (1949) he supposedly called Victor Mature, "100 percent yellow." when he refused to do a stunt.  An expert archer hired for a battle scene for The Crusades (1935) reportedly shot DeMille's megaphone as he barked direction.  He was supposedly angry about stunt men being hurt on the set under DeMille's direction.

On a personal level, DeMille was married to his only wife for 57 years, until his death.  They had one child together and adopted three others.  However, it was well known that he had two mistresses.  They sometimes entertained him at the same time.  My guess is that the milk bathing scene in this film was not the only time he directed two women into a sexual situation.  By the way, Patrick is correct. With a good remote control you can clearly see Colbert's nipple.

I have mostly known Claudette Colbert as the naive, sheltered heiress in It Happened One Night (1934).  Her role here could not be more different.  She is married to a gay man and lusts after Rome's most eligible bachelor.  When exiting her palace, one man describes her as, "Another Helen of Troy, only more beautiful."  Another man suggests something to cause deep slumber.  She responds, "I'd rather have an exciting dream."  Later she states to Marcus that if he has sex with her she will make him forget Mercia entirely.

The Sign of the Cross was blatant in sex and violence. When Marcus talks to Mercia at the well, he pours out his water yet stares into her eyes and says, "I can't remember the last time I''ve been so thirsty."  My brothers mentioned the woman dancing and singing at what is to be an orgy.  She sees Marcus, who has become abstinent since falling in love with Mercia and says, "Without you there is no flavor for the feast."  While doing her dance, she falls into Marcus's arms and again using the pause button, can see that he gets one hand solidly on a breast.  Scott mentioned the naked guy sitting next to Nero's throne.  Scan slowly through that scene and it appears that the actor was in fact completely naked.

My brothers also mentioned all the death in the arena, but the most horrifying scene is when the teenage boy gets tortured.  It happens off screen but we hear his screams and see the burnt marks on his back afterwards.  There is also the massacre of the Christians by Roman archers.  DeMille was such a sadist that one arrow goes into a woman's neck.  Even an infant gets an arrow stuck in him while being held by it's mother trying to flee.  A young girl tries in vain to pull an arrow out of her dead mother's back.

Although this film was shocking for the time, it also featured heavy amounts of Christianity. It was an excuse DeMille employed to show women in skimpy clothes and in sexual situations.  "I didn't write the Bible and didn't invent sin."  He is credited as saying.  Yet, as Patrick noted, he did treat Christianity with sincere reverence.  At one point Marcus says about Christians, "They're so dissatisfied with the world they'd like to destroy it."  An elderly Christian responds, "I heard they want to save it by making men spiritually free."

Cecil B. DeMille was the kind of director we rarely see.  He was as blunt with sex and violence as he was with religion.  He put it out there and cared not what critics thought.  Although I have not seen all of his films, I cannot imagine any were more daring or shocking than The Sign of the Cross.