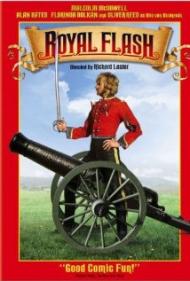 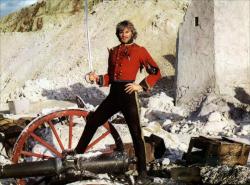 Royal Flash is, to date, the only attempt to adapt the long running Flashman Papers series of comic historical novels for the big screen. The second of the twelve novels by George MacDonald Fraser was chosen as the first to be filmed in part because its European setting was deemed cheaper than the Afghanistan setting of the first novel. Also, the similarities between its plot and the oft filmed Prisoner of Zenda (in the novel Flashman claims that his adventures were the inspiration for that tale) meant that the story had already proved successful in the past. Unfortunately the film wasn't a success, despite being written by Fraser and directed by Richard Lester, the two of whom had worked so successfully together on The Three Musketeer films. Fraser was so disappointed by the end result that he ruled out all future films based on his character.

For those unfamiliar, Harry Flashman, the star of the Flashman Papers and this film, is an English soldier in the 18th century. In appearance he is supposed to look like the perfect English hero. At least in the books. While there he is described as being a strapping 6 footer around two hundred pounds. In this film, he is played by scrawny Malcom McDowell, whose physical deficiencies are shown repeatedly when he goes shirtless in several scenes. This outward appearance is meant to contrast his personality, which is that of a coward and a cad. Throughout the books, Flashman gets into scrapes and adventures, emerging triumphant despite himself, and almost always, to his delight, viewed as a hero.

His adventures are set against a highly detailed historical backdrop that features many famous and obscure real life characters. Written as a memoir, the books are so historically accurate, complete with appendices and footnotes, that a few reviewers when the first book was published failed to realize it was fiction and reviewed it as if it were an actual memoir. Only the second novel, upon which this movie is based, features a completely made up situation and location, although it does still feature many historical characters.

The plot of this adventure has Flashman in Bavaria where he is forced into marrying a German princess (Britt Eckland) by Otto Von Bizmarck (Oliver Reed). Flashman, it turns out, is a dead ringer for the Danish Prince that the princess is engaged to. Bizmarck tells Flashman that the real prince has a dose of the clap and so needs Flashman to stand in for him for a few weeks until he can be cured, however, the German politician has his own secret reasons for the wedding.

Beyond the miscasting of McDowell, the film misfires in several other ways. The comedy is of the slapstick, lowest common denominator type. There are some swashbuckling moments, but the humor is so broad that it never generates the slightest bit of tension. Flashman is softened into being a buffoon. As an example, in the book Flashman tortures and kills an enemy to find out certain information, while here, while he still kills the same character, it's played for laughs and involves Flashman falling off a bridge, into a gorge and still surviving.

The historical elements are also missing from the story. The characters are there, but we learn little about them. Lola Montez, for instance, is featured but we learn nothing of her very interesting past and instead she is portrayed simply as a sexy, if eccentric Spanish woman. Likewise, we learn little about Otto Von Bizmarck, who would become the most powerful German politician of the century. Obviously it's harder to give a character's background in a film than it is in a book, especially such a light comedy like this one, but a large part of the novel's charm is the way we learn real history while being entertained. I say completely seriously that any 18th century world history class should use these novels as teaching aids.

I will admit that there are some nice and comic moments in the film. Visually, Lester brings the same historical flair that he brought to The Three Musketeers films. He seems to delight in showing 18th century gadgets, all of which inevitably go wrong. If only Flashman wasn't presented as such a cartoon character.

It's almost always a mistake to watch a movie based upon a book that you love. I think that someone unfamiliar with the novels will find this more enjoyable than I did. Although given the critical and box office failure at the time it was released, perhaps not that much more enjoyable.