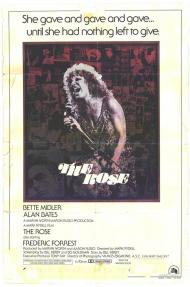 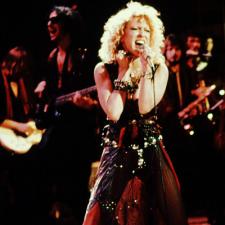 Bette Midler is the Rose.

The Rose is the most important film in Bette Midler's career. It was her first starring role, and its theme became her signature song. Although she gives it her all, it is not the performance I remember it being.

Inspired by Janis Joplin, Mary Rose Foster is a rock-n-roll/blues singer known simply as The Rose. She is an outspoken alcoholic with a drug history. Her first scene is of her stumbling out of a plane dropping a bottle of booze. Just before going on stage she is told, several times, not to say, "Motherfucker." Of course the first words out of her mouth once she gets on stage are, "Hiya motherfuckers!"

Whereas The Rose is an entertaining character, her motives are vague, and as such the plot is secondary to her. The only tension comes from her being insecure about an upcoming concert in her home town. She keeps telling her manager that she is tired, and needs an extended vacation, while he reminds her of all the contractual obligations they have made.

The Rose is extremely self destructive. Not only does she drink in nearly every other scene, but she eventually gets back on drugs. She meets a man and seems happy for a brief time. Contrary to her bitching about being tired, she stays out late partying all the time. For supposedly having a wild youth, the film never gives details. She makes a comment/joke about having had sex with the whole football team in highschool. The brief moment her parents are on screen they seem like middle of the road Americans. The movie never says why she turned out to be such a mess.

Bette Midler received many accolades for her performance. She deservedly lost the Oscar to Sally Field in Norma Rae.  Midler's mannerisms are practically her trademark. They populate her performance, and as such, I never felt I was watching a troubled singer named The Rose. I was simply watching Midler try to act like that person.

Where she shines, and the movie excels, is in the stage performances. Midler, as Rose, puts so much into her performances, that you can almost sympathize with her whining about being tired. They are physically and emotionally draining for her. Midler on stage, are the only scenes where her acting seems at all natural. Midler gives the soundtrack her all. Along with the title song, the stand outs are "Midnight in Memphis" and "When a Man Loves a Woman".

The Rose is the cornerstone of Midler's career. It demonstrates her strengths as a performer, as well as her weaknesses as an actress. 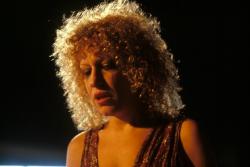 Bette Midler as The Rose.

The Rose is a movie I loved as a kid. Bette Midler gives one hell of a performance as the tragic singer whose life is loosely based on Janis Joplin. We owned the soundtrack album and I still know every song by heart. I agree with Eric that Midler is at her best when performing onstage as the title character.

To me the difference between this movie and Midler's other famous musical, Beaches, is that here she is playing a character vastly different from her real persona, whereas C.C. Bloom seems quite similar to the real woman. For starters, The Rose, is a rocker/hippie/chick. She parties hard and her singing style is much rougher and more forced than Midler's usual style. At times it almost seems as if she is causing physical harm to herself from singing so harshly. Midler ACTS Rose but she IS C.C. Bloom.

As Eric said this movie made Bette Midler a bona fide movie star after years of cult success as a nightclub singer/recording artist. She was the most talented and original singer/actress to hit the scene since Barbra Streisand a dozen years earlier. They have been compared often in their careers and in one scene in this movie (set in a Greenwich Village nightclub) female impersonators imitate both Streisand and Midler (as The Rose) as well as fellow gay icons Diana Ross, Mae West and Bette Davis (Midler's namesake). The Rose joins them onstage for an impromptu performance.

Eric mentioned three of the movie's best songs. Others include the uptempo "Keep On Rockin'" and a brutal rendition of "Stay With Me" at the climax with Rose desperately pleading for her life in song. The theme of the movie is how everyone always leaves her alone in the end. Her last words onstage are a whispered query, “Where you going...? Where's everybody going...?”

The script works a bit too hard to get Rose to that tragic final show. She hits rock bottom after her breakup with Huston (an excellent Frederic Forrest). But the scene where Midler is in the phone booth behind her old high school football field (the site of her most humiliating teenage experience) is an Oscar worthy moment and demonstrates her instinctive talent as an actress. Again comparing her to Streisand, they are both far from subtle actresses that nevertheless possess an uncanny ability to convey genuine emotion to an audience, whether in song or with their acting prowess. And both actresses peaked with their debut roles. The Rose is Bette's finest hour just as Funny Girl will always be Barbra's.

Thirty odd years after I first watched it, The Rose remains one of the most impressive one woman displays of raw talent in movie history. 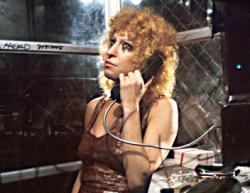 Bette Midler in The Rose.

I agree that Bette Midler delivers a powerhouse performance as the Rose, but this isn't an entertaining film. Like Patrick, I remember watching this movie as a child on HBO and enjoying it while empathizing for Midler's character. Watching it now however, with an adult's eyes, I see that in reality, despite whatever troubled, insecure childhood that she may have had, her problems are all her own.

The Rose constantly complains that she's tired and wants time off, but she contributes to her own tiredness by drinking constantly. She allows her manager to browbeat her and schedule her for shows that she doesn't want to and she copes with it by drinking. A country singer is rude to her and she copes with it by drinking. When she gets stressed about her hometown show, she drinks and takes drugs. She is so blatantly self-destructive that the ending of the film is inevitable.

Others in her life are just as culpable in her fate. Her manager is aware of her fragile state, but does nothing to intervene. He just keeps milking her career by booking her into show after show. Even Huston, who's in love with her, does nothing to curtail her partying.

Although her entire performance is great, I agree with Patrick that it is the scene in the phone booth that is her Oscar moment. It's the moment that generated the greatest sympathy with me. This show-her hometown show-should be her moment of triumph, but she has no one with whom to share it. Her addictions have put a wall around her. It's the saddest moment in a sad film.

I do agree with my brothers that Midler performs well on stage, but apart from the title track, I can't say I enjoyed any of the songs and can't imagine ever listening to any of them outside of this movie. As Patrick said, she sounds as if she's in physical pain sometimes when she sings.

Midler definitely showed dramatic talent with this part and she never matched it in a movie again. Overall though, this movie runs too long and too predictably to be something I could enjoy all that much.