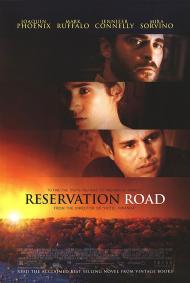 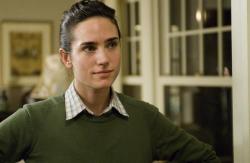 Reservation Road is pure Lifetime movie of the week melodrama, it just happens to feature some fairly big name actors. It's depressing as hell and I'm not sure who this movie is supposed to appeal to. I guess maybe if you'd lost someone close to you because of a hit-and-run accident, there might be something here for you, but if not, I'm not sure why anyone would enjoy this movie.

The plot is pretty basic. Ethan and Grace (Phoenix and Connelly) are married parents whose son is killed by Dwight in a hit-and-run accident. Dwight feels guilty but doesn't turn himself in. Ethan and Grace are sad. Grace tries to put her life back together, while Ethan becomes obsessed with finding the driver. In one of those bizarre, only happens in the movies, twists, Ethan hires a lawyer to help him catch the perpetrator and the lawyer turns out to be Dwight, who understandably isn't overly anxious for Ethan to discover the driver's identity.

Nearly all of the characters here are one-note characters, with the exception of Dwight. Ethan is obsessed. Grace is sad. Dwight is the only character who develops over the course of the movie. Killing someone else's son ends up bringing him closer to his own son, whom because of a messy divorce he only gets to see on a limited basis. What exactly is this movie saying when it shows the "bad guy" in this scenario as the most human?

I'm a fan of the beautiful and talented Jennifer Connelly and she does her usual good job of acting in what is really a pretty small part. She's the only reason I watched this movie. Her appearance didn't make the movie any better though.

There's not very much else for me to say about this movie. It's depressing and sad. It's not a topic I enjoyed watching a movie about. It offers no startling insights and I can't say it was entertaining and I didn't learn anything at the end of it. I'm pretty much baffled as to what the point of this movie actually was. 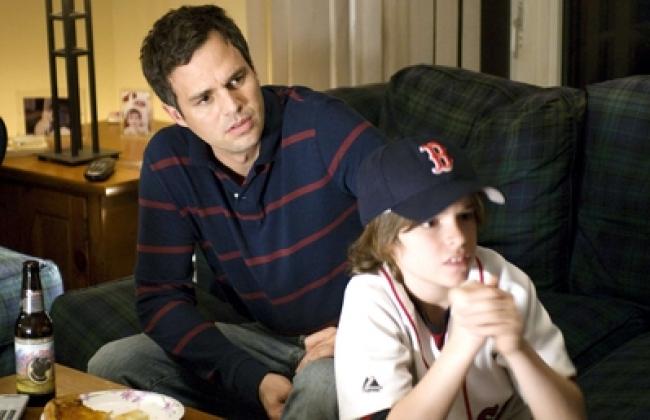 Reservation Road is, of course, a depressing story. The subject matter, a child’s violent death, cannot be anything but. With that story line, we must find some entertainment on our level of empathy for the parents and their disintegrating marriage or our interest in seeing how the dead child’s father reacts when discovering who the driver of the SUV is. Either is not going to be light hearted or unpredictable.

It is in fact that very predictableness of the story that weakens the film. A child is killed, so of course we know how everyone will react. It was even obvious to me that when we see Ethan drive by, as Dwight goes to work, that Ethan will hire Dwight. Where else could the plot go?

The entire film relies on the moment Dwight hits the child and drives away. As Scott wrote, Dwight is by far the most interesting person on screen. Your reaction to him and his decision is what will make or break this movie for you. Judging by the pitiful box office returns, it was not played very affectively for most audiences.

Dwight is driving his son home quickly as his ex-wife has called and scolded him for not getting their son back to her earlier. He was enjoying a baseball game with his father that ran into extra innings. Just before hitting the boy, she calls to complain some more. Dwight goes to answer his cell, swerves and hits the child. Although it is Dwight’s fault completely, had his ex-wife not been such a selfish person, that child would not have been killed.

Here is the moment of truth. For some reason, Dwight does not stop and we never find out why exactly. His son gets a bump on his head when he hits the dashboard during the accident. Dwight immediately drives to a convenience store to get ice for his head. Is concern for his own son’s health why he did not stop? His wife yells at him when he arrives with their child, complaining about how she was just starting to trust him again. Was he so worried about his wife’s opinion and how she may affect his custody that he did not stop? Is he just a bad person? Other than this incident, he is not portrayed as such.

We are meant to feel sorry for both Dwight and Ethan. This accident has taken Ethan’s son away from him and it will most likely take Dwight away from his. However, as the movie progressed, I liked Ethan less and Dwight more. Was it the intention of the film makers for us to sympathize with a murderer? I liked that it made Dwight a fairly well rounded person but as he comes to grip with what he must do, Ethan falls apart in an unrealistic manner. I understand how someone may want to act the way he does but he becomes so irrational that he is no longer likable.

Even after we get to the big confrontation between fathers we still never get an appropriate answer to why Dwight never stopped. It is the very thing that is most important to the entire story but all we get is that, “I was scared!” Reservation Road could have been a decent moral tale of guilt and culpability but it spends far too much time wandering through cliché ridden melodrama.