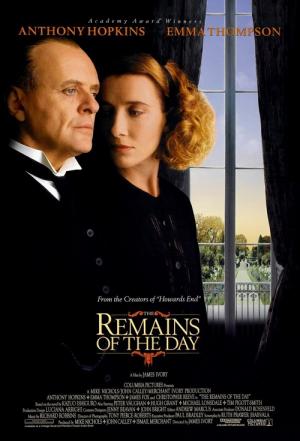 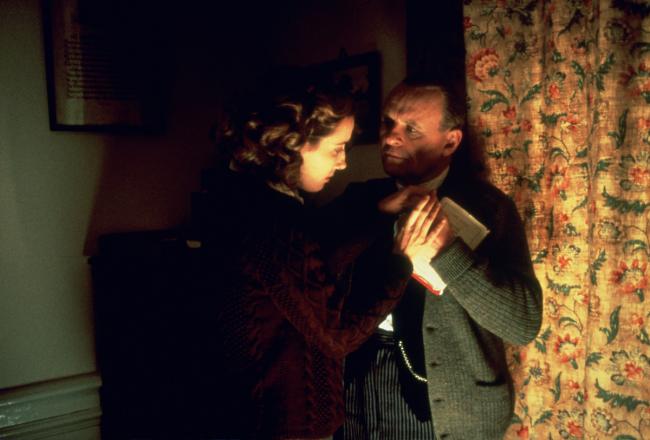 Emma Thompson and Anthony Hopkins in The Remains of the Day.

When I first watched The Remains of the Day, I was only 24 years old. With so much of my own day still before me, I wasn't able to appreciate the story as much then as I am now that the afternoon is drawing to a close. I enjoyed the movie then, but it didn't affect me strongly. After recently reading and enjoying the 1989 Booker Prize winning novel upon which the film is based, I decided to revisit it. Not only did I enjoy it more this time, I also found it heartbreakingly beautiful.

Repressed emotion has always been a specialty of the British and perhaps no one does it better than Anthony Hopkins, with this role being the supreme example of that particular art. He plays Stevens, a butler in one of England's grand houses. The story begins in the 1950s with an elderly Stevens working for an American, played by Christopher Reeve in one of his final roles before the accident that would leave him paralyzed. A letter from Miss Kenton (Emma Thompson), a former housekeeper, spurs Stevens to take a road trip to visit her with the expressed purpose of seeing if she is available to return to Darlington Hall and resume her former duties. As the film progresses we learn that Stevens' real purpose runs much deeper than that.

As Stevens drives through the English countryside he reminisces about his past, and the 1930s in particular. His former employer, Lord Darlington, was an honorable, but misguided gentlemen very much of the "Peace at any Price" school of thought. He worked very hard at maintaining the peace between Britain and Germany and even flirted with fascism and antisemitism. To further the cause of peace, he held meetings and grand dinners attended by great men of the age. Stevens, as butler, organized these affairs and took great pride in his ability to do so.

Even more important in his memories is his relationship with Miss Kenton. Their relationship began on a rocky footing, but over the years a very restrained, emotional attachment formed between them. Stevens, who always knows his, and everyone else's place, is very careful to never let his personal feelings show, and so any true romance between them died before it ever had the chance to blossom. This trip, although he won't admit it to himself, is about seeing if it's too late to revive those old feelings.

The film was nominated for 8 Academy Awards, including Best Picture, Best Director, Best Actor, Best Actress, and Best Adapted Screenplay. It won exactly zero. It had the misfortune of being up against Schindler's List and Hopkins lost out to Tom Hanks for Philadelphia. It's a shame that the film didn't win because it is definitely award worthy. Hopkins and Thompson are both perfect in their parts. I remember at the time Hopkins' chances of winning the Oscar were dismissed because it was said that he could play this part in his sleep, and while it's true he's played repressed before (just a year prior he'd done it in another Merchant/Ivory film, Howard's End), it's unfair to so easily sweep this part aside. His portrayal isn't as showy as Hanks' was, but it is so carefully nuanced and subtle as to be a work of art. Thompson is also quite good, but this is Hopkins' film to carry.

Any big screen adaptation of a great book is bound to suffer by comparison and it's true that this film doesn't quite live up to the greatness of its source material, but it's the fault of the medium rather than the production. The novel is told through the eyes of Stevens. The reader has to infer and interpret a great deal of the story through his narration, where in the film we are objective viewers able to see the action and Stevens reaction to it separately. The film also condenses the time span and combines a few of the characters in order to fit the story into the running time of a film.

This is a story of regret and it's beautifully told. The ending at the bus stop in the rain is the culmination of that regret. Some film's get better with age and this is one that does. 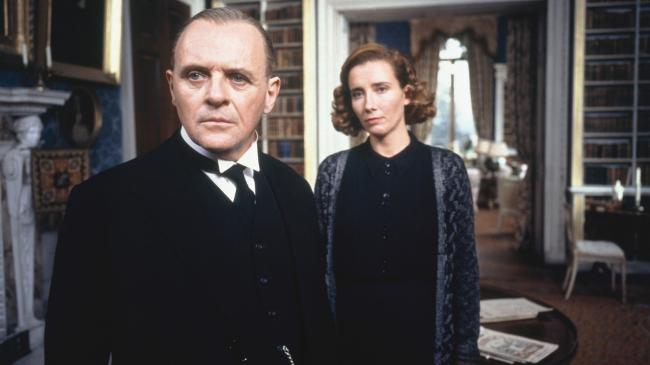 Anthony Hopkins and Emma Thompson in The Remains of the Day.

I had never seen The Remains of the Day nor read the novel on which it's based, but as a fan of Merchant/Ivory I settled in expecting an intelligently written and beautifully rendered motion picture. I wasn't disappointed. The time era is exquisitely recreated and matches the talents of the cast like drapes to a sofa. Its colors are as burnished as the acting and the story unfolds gracefully and elegantly.

Anthony Hopkins as Mr. Stevens, the butler of Darlington Hall, is indeed perfect. He's a sad, frustrating man. This man is so damn emotionally repressed that he continues seeing to his duties even after learning of his father's death upstairs. Mr. Stevens spends his days (and evenings) in service to others. He rarely gets a quiet moment to himself. He lives his entire life thinking only of the needs of his master and the grand house he serves. Emma Thompson is equally good as the heartbroken Miss Kenton.

The Remains of the Day belongs to a sub-genre of the period drama. Downton Abbey and Robert Altman's Gosford Park (2001) are recent examples but you can go back to Upstairs, Downstairs in the 1970s and all the way back to Cavalcade, 1933's Oscar winner for Best Picture which was itself based on Noël Coward's 1931 play. These movies (or television shows) deal specifically with the interactions between the ruling and serving classes in England before the second world war.

The gulf between the classes is most pointedly demonstrated when one of Lord Darlington's guests asks Mr. Stevens several questions about foreign affairs, to which Mr. Stevens has no answer. He does this in an extremely condescending manner as a way of making a point about the ignorance of the working classes. It also tells the audience that Darlington's friends are fascist assholes. Later when Hugh Grant's character asks Mr. Stevens if he recalls any of the speeches that were given at Darlington Hall Mr. Stevens states the obvious, “I was too busy serving to pay attention to the speeches.”

The relationship between Mr. Stevens and Miss Kenton is one of the great unfulfilled love affairs in cinema. This movie drips with regret. The remains of Mr. Stevens' days are likely to be lonely and he has no one to blame but himself. 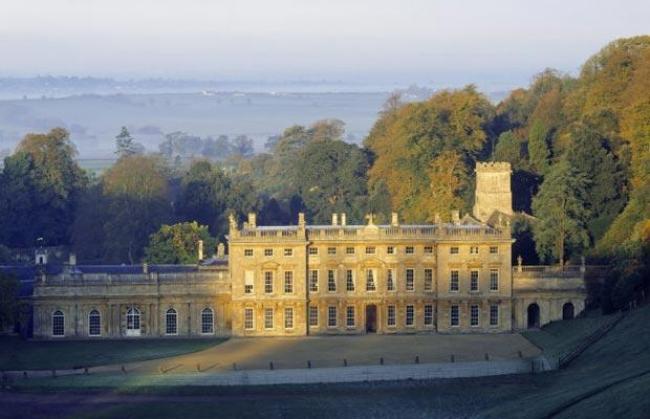 How many servants were needed to maintain this home?

As I watched Remains of the Day, I was reminded of Life is Beautiful, where Roberto Begnini's character is told of honor in serving other people. He learns this from a relative just as Mr. Stevens did from his father. Although being a servant does not sound like an exciting career choice, Mr, Stevens takes great pride in his work and the stature he has within the hierarchy of the home's staff.

Much of that proud posturing comes from his opinion of his employer, Lord Darlington. Mr. Stevens views him, at first, as a man of grand public standing, who is attempting to accomplish great things. "...a man cannot call himself well-contented until he has done all he can to be of service to his employer. Of course, this assumes that one's employer is a superior person, not only in rank, or wealth, but in moral stature." Mr. Stevens, of course, never speaks ill of Darlington, even when Darlington becomes labeled a traitor. Instead of engaging in conversation that may besmirch his (former) employer's name, he simply removes himself from the conversation as politely as he can. Mr. Stevens never verbally judges anyone. Even the servants underneath him get only his non judgemental instructions. Look at how he shows the wait staff how to precisely set the formal dining table or when he tells another to, "Wake up." as there is an important meeting taking place in the home, going late into the night.

The only exception to this rule is Miss Kenton, "I'm very busy. I am surprised that you have nothing better to do than stand around all day... " He scolds her after she asks that a china man statue may be in the wrong locale in a room. In fact, she is the only person he treats at all without masking his manners. After annoying him, yet again, he tells her, "You know what I am doing, Miss Kenton? I am placing my thoughts elsewhere while you chatter away." Miss Kenton gets under his skin in a way that no one else ever had. She even invades his privacy where she discovers, almost against his will, that he secretly reads old fashioned love stories. He claims he does it to increase his vocabulary.

Although we get little to no direct information on Mr. Stevens' past, we can guess that he is a middle aged virgin who privately yearns for the kind of companion he only reads about when he has a moment to himself. As she is in charge of all of the maids, Miss Kenton is the closest woman to him in stature at the manor home and the only one who seems to be brave enough to ever question him. He is thrown off by her impertinence and even more so by her invasion into his private life. She stirs something in him that he is completely ill equipped to handle.

Mr Stevens loyalty lies with his employer and as it is the only life he has apparently ever known, it is where he is most comfortable. This creates Mr. Stevens dilemma. Should he keep his life as is, where everything is in exact order and he knows every day what needs to be done or does he allow Miss Kenton into his life, where surely his routine would become complicated and, more importantly, unpredictable. As the movie begins, we know what decision he made but can he right the wrong choice he made so long ago?

The fact that Anthony Hopkins lost the Oscar to Tom Hanks for Philadelphia is laughable. Hanks was certainly adequate but his win was more about the timing of the film's subject matter than anything else. Hopkins had to play every scene with repressed emotions yet still allow us to understand how he is feeling. Look at the slight hint of anger he shows when the arrogant man insults him, in the scene Patrick described. Notice the different ways he looks at Miss Kenton. Mr. Stevens has a perfected professional stone face but she manages to elicit slight variations of it from him, whether he is looking at her with annoyance or secret longing. It is truly one of the greater acting performances of its time.

Remains of the Day is a film about regret and unrequited love but it is also about pride, loyalty and perceptions. How many of us think of servants with any sort of reverence. Yet, here we have a butler who is, in almost every way, the master of a castle. No room is closed to him. He carries the house's keys and no one, save Lord Darlington or Miss Kenton, ever thinks to question him. It is a position that he lived for but his commitment to it proved to be all consuming, never allowing for anything else, including love, to impede on his duties. How terribly sad.