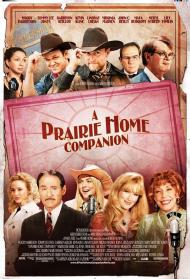 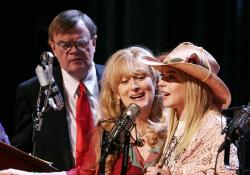 Robert Altman might be 81 years old, but damn he still knows how to direct a big cast of characters in an entertaining movie. A Prairie Home Companion, his latest, is a simple quirky, little story with humor, emotion and an all around great cast.

Written by Garrison Keillor, the movie takes place, apart from the epilogue, all on one night, detailing the final show of a long-running radio show in St. Paul, Minnesota. The show isn't just based on Keillor's real radio show, it virtually is Keillor's real show, with down home humor and lots of old songs. The only difference is that everyone playing anyone associated with the show is a star.

Narrating the movie is Kevin Kline's head of security, wannabe Private Detective, the aptly named Guy Noir. He dresses in a suit from the 1940s and talks like he's Sam Spade. When describing a woman he's seen, he says, "She was wearing a white coat that was so white, rain was too embarrassed to get it wet." And, "Her hair was what God had in mind when he said, 'Let there be hair'."

Tomlin and Streep play singing sisters who are both regulars on the show. They intersperse their songs with tales of the family, some dead now and all of them sad. Lohan plays Streep's daughter, a depressive creature who mopes about writing poems about death. Also on the show are a pair of singing cowboys played by Harrelson and Reilly. They're the writers of such songs as, "I'll give you my moonshine, if you show me your jugs." A sample of their lyrics, "Liquor she said, and lick her I did. And I don't work there anymore."

While all of this is funny and touching at times, it is Virginia Madsen who adds a touch of depth to the story when she appears as the woman in white, but who in reality is the angel of death. She hovers around for the evening, often interacting with the cast and crew. And it's not just the death of the show that she's come for.

At the heart of the movie, as he is at the heart of the radio show, is Keillor. Like a modern day Mark Twain, he spins his stories and jokes, of which he has one for every situation. He's like the uncle who can't stop telling stories, but unlike most uncles, his are actually funny and worth listening to.

Clocking in at way under 2 hours, A Prairie Home Companion moves quickly, despite not having much in the way of story and never flags or disappoints. Without any action or even a hint of real danger, it still manages to provide more entertainment than almost any of the summer blockbusters being released around it. At 81 years of age, Altman might not have too many movies left in him, but for all our sakes let's hope he has at least a few more like this one. 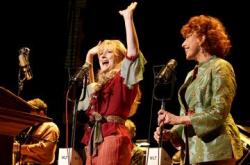 Meryl Streep and LIly Tomlin in A Prairie Home Companion.

This movie has great direction and great performances. Why then, did I not love this movie? The plot must be the culprit. We, the audience, are asked to step into the middle of these people's lives and care about them. Sure, they are all about to be unemployed, but none of them are that upset about it. When someone dies, no one reacts overly emotional. The angel of death walks around and no one seems too excited about it. Everyone has a ho-hum, the show must go on attitude. How can I get emotionally involved with characters who only get animated when telling stories that may or may not be true?

Streep, Lohan and the rest of the cast do great jobs with all of the dialogue and singing. Kline is funny as Guy Noir. As Scott wrote, he has many great lines. As a mid-westerner I was taken back by this one, “They were mid-westerners. They thought like, if you ignored bad news it might go away.” What is, the famously democrat, Keillor really trying to say?

Keillor, and many cast members, spin funny yarns throughout the movie. Often talking about family and friends no longer around. By the end of the film, you realize that all you have been watching is one big yarn. It is as if this night actually existed a long time ago, but someone has told the story of that night so many times that it has been exaggerated and embellished over time. 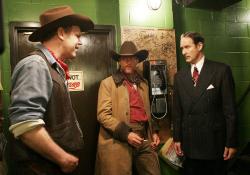 Sadly this turned out to be Robert Altman's last movie. I think perhaps he knew he was dying, apropos the plot. At any rate this touching, whimsical comedy is the perfect swan song for the great maverick director.

Like Scott I really enjoyed this little gem of a movie. Although it does feature a fairly large cast it is also quite different than most of Altman's films. It is less serious and cynical than much of the director's work. Even his comedies in the past have had an acerbic edge to them. This movie is poignant but never really sad, and its gentle humor pulls you in.

The acting is great as mentioned. The only exception being Lohan. Normally I am a fan of her work but here she seems a bit out of her league. I admit she has talent but in this role she doesn't seem to have a good grasp of the finer nuances of her character. But then again it might just be the fact that most of her scenes are with Meryl Streep and Lily Tomlin.

Robert Altman's body of work is now complete and I don't think he could have picked a better movie to end it on. May he rest in peace.