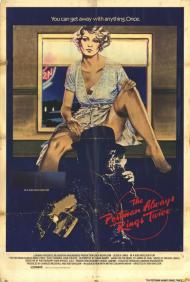 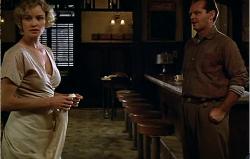 This remake of the classic 1946 film noir (based on the 1934 novel by James M. Cain) is a wasted effort whose sole purpose seems to be to show stars Jack Nicholson and Jessica Lange graphically fornicating on a kitchen table. It lacks the smoldering-beneath-the-surface lust of the John Garfield, Lana Turner version and instead replaces it with pure beast-like rutting. Unfortunately this scene is the most memorable in this entire mess of a movie.

Jack Nicholson seems miscast as the drifter Frank. I cannot for the life of me fathom what Jessica Lange's Cora sees in him. Their inexplicable sexual attraction is just one of the film's many problems. It lacks any of the tension or suspense created in the original movie over whether or not these two criminals will get caught. This is particularly evident during their initial attempt at murdering Cora's husband. In the 1946 version the suspense is so thick it can be cut with a knife. Here when the motorcycle cop stops by to chat about the diner's new neon sign, thus foiling their plot, it lacks any tension.

The first movie also explained the symbolism of the title. This movie doesn't even attempt to and it alters the ending in a ridiculous manner that I won't give away. I'll just say it removes pretty much all of the dramatic irony from the story. On a positive note it does faithfully recreate its Depression era setting.

James M. Cain's novel is short, just 100 pages, yet for some reason David Mamet delivered a screenplay that runs two hours. A third act detour where Cora goes home to visit her sick mother while Frank briefly joins a circus (I kid you not) makes no sense whatsoever. Anjelica Huston plays a lion tamer who has an affair with Frank and then later leaves one of her cats behind at the diner as a memento of their fling.

Jessica Lange is better cast as Cora. At least she looks the part anyway. Unfortunately the script isn't able to properly motivate her character. Nicholson's Frank is certainly no catch, and her husband is neither old enough nor too far gone in the bottle to justify her easy betrayal of him. Perhaps I am a bit biased, as I detest remakes of classic movies, but this Postman should have taken the day off.