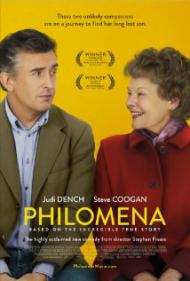 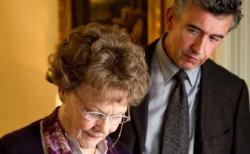 With Philomena, what could have been fodder for a LifeTime movie of the week is instead transformed into an odd couple comedy wrapped around a tragedy thanks to the wonderful pairing of Steve Coogan and Judi Dench. Guided by director Stephen Frears (The Queen, The Grifters, My Beautiful Launderette among many others), the two stars wring laughs and tears out of what is ultimately a sad story about one woman's search for the son she gave up for adoption 50 years previously.

The script, co-written by Coogan, is inspired by the true story of Philomena Lee, an Irish woman who had a baby of out wedlock in the 1950s when she was just 18. Her father sent her to a convent where she became in essence an indentured servant for the next 4 years. Her child was taken away from her and put up for adoption without Philomena even being allowed to say good-bye. Despite pleas through the years for information about her son, Philomena was never able to learn where he went. 50 years later, feeling guilty and a little tipsy, Philomena finally reveals her secret, which she had kept from her husband and children.

Meanwhile, Coogan plays real life journalist Martin Sixsmith who following his fall from favor in the Tony Blair administration is searching for a new angle to his career. It's suggested that he try his hand at a human interest story and when he stumbles upon Philomena's story, he picks it up and runs with it. Using his journalistic and political connections, he is able to trace Philomena's son to America and with Philomena in tow, sets out across the Atlantic to track him down.

Philomena's story is a sad one, especially in the flashbacks. According to this film, many convents in Ireland at that time would allow the children in their care to be adopted for a 1,000 pound donation by a Catholic family. Even Jane Russell, whose photo is shown adorning the wall of the Mother Superior's office, pulled an early Madonna by traveling to Ireland to adopt a baby from the same convent. Even if you believe that the Nuns thought that they were doing this for the mother and babies' own good, it was a practice with severe consequences for mother and child. Years later, when the practice fell out of fashion, many of the adoption records were destroyed by the church to protect themselves from future liabilities.

It is only with Martin's help that Philomena is able to get past this wall of silence. Together they make the journey that ultimately changes both of them.

Dench plays Philomena as a good hearted, but dowdy woman of faith whose pleasures in life consist of sherry, television and romance novels. Traveling in business class and staying at top flight hotels is a new experience to which she brings her outgoing friendliness. Martin is a cynical non-believer who is much more worldly than Philomena, but who seems to derive far less pleasure out of life. At first Martin sees her simply as his ticket back into the world of journalism, but he soon develops genuine feelings for her.

Although the plot sounds sad, and parts of it are, it is also a delightful comedy. Coogan and Dench make terrific opposites who play off of each so brilliantly that you will find yourself laughing more often than crying. This is a road trip, buddy movie comedy with genuine heart at its center. These two stars share a fantastic chemistry that is never allowed to become too sappy and cloying.

As with many films that are based on true stories, some of the details have been changed. Here, for instance, the whole story seems to take place in a very short time, where in real life the search took five years. However, the broader plot points are all accurate, including the identity, occupation and fate of Philomena's son. Although this would still have been an entertaining story were it entirely fictional, knowing that most of it is grounded in truth gives it added poignancy.

This is a small film that could easily be lost amongst the higher profile films being released this holiday season, which would be a shame. It deserves to find a larger audience.

Philomena is, as my brother wrote, tinged with sadness even in its most humorous moments. This true story of a mother's search for her child has a universal theme. Anyone can relate to it. As the details of the story unfold it grows more compelling. By the end of the movie you will not only feel overwhelming compassion for this woman, but also respect and more than a bit of affection.

Philomena has been accused by some of being an attack on the Catholic Church and it does indeed cast that venerable institution in the role of villain. It does so, however, without having to stretch the facts of the case much, and it also depends on one's perspective. You can see it as tyrannical; the Church stealing this woman's baby and selling it for money. Or you can see it as a benevolent, if strict, organization that gave these women and their babies a chance at a life they would not otherwise have had. Philomena herself seems to view it the latter way.

The biggest dramatic license taken by the film deals with the character of Sister Hildegarde McNulty. She is the film's chief antagonist; the emotional climax of the story centers on Sixsmith's angry confrontation with her. In real life McNulty died in 1995. Sixsmith never met her. For the record, Sister Julie, a nun at the convent depicted in the movie, has denied that records were intentionally destroyed or that the nunnery ever received payment for the adopted children.

In the name of fairness I want to point out the fact that the movie depicts both Philomena and journalist Martin Sixsmith as flawed human beings. She is a bit dimwitted with decidedly lowbrow tastes and he's an arrogant prick. She gave up her virginity to a virtual stranger at a time and place where she must have known the consequences would be extreme. Although I doubt she expected to be paying for it for the rest of her life. He has been fired from his high-powered job and is at loose-ends as the story begins. She gives him a new purpose in life, while he helps her find a long sought after peace.

Judi Dench gives yet another sublime performance in the title role. She shows several aspects of this woman's personality, from her off-kilter sense of humor to her unshakable faith. Neither the script, nor Dench's portrayal, ever reduce Philomena to being merely a victim. Dench imbues her with dignity. As for Coogan, he's decent in a role that doesn't require much of a stretch.

Regardless of one's feelings towards Catholicism, Philomena's story is both riveting and tragic. My eyes filled with tears for her plight a few times along the way. I also chuckled on several occasions. The ending is about as satisfying as you can expect given the circumstances. So while Philomena may cast the Catholic Church in a negative light, it simultaneously shows one individual Catholic with a staunchly enduring faith and seemingly unlimited capability for forgiveness. 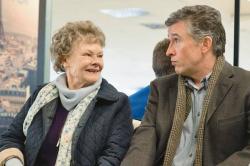 Philomena reminded me of a conversation I was once witness to. A pregnant girl, just out of high school, was telling a much older woman how she could not wait for her child to be born so she could quit her job. She explained how she would be getting welfare, free food for her child (WIC), a free college education and free day care while she attended community college. The older woman responded that when she became pregnant as a teenager in the late 1950s, she was sent to a school for pregnant unwed girls. She then remarked to me that in her day a single mother was treated with shame while nowadays they are rewarded.

Philomena was, as Scott wrote, an indentured servant to some extremely strict nuns. Other than one, these women of God are shown to be cruel beasts that have long since had their hearts replaced by cold rocks. They allow Philomena to suffer when giving birth as her penance for carnal sin. When Philomena and Martin ask for paperwork from the Nuns, they are told that all the adoption paperwork was lost in a fire, however, the paper Philomena signed half a century ago stating she would never look for her son after adoption is perfectly preserved.

As Patrick noted, the Catholic Church takes a serious hit in this film. These are not your Sound of Music or Sister Act nuns. The only singing here is a forced choir practice under the watchful eye of a Nun choir director. The church financially benefited from these young women. They “sold” the children through adoptions. It was all legally handled yet heartbreakingly personal.

Philomena plays out like the old saying of truth being stranger than fiction. It is sprinkled with humor as these two opposite people take a trip of discovery. I laughed at her wanting to watch a Martin Lawrence film and her conversation with the cook at the hotel.

Philomena is a religious person of faith while Martin is a cynical journalist. They would otherwise pay each other little mind, but she needs his help finding her son while he needs a career comeback. She never relinquishes her faith while Martin never discovers his. Their journey is not one of life changing but life affirming.

Their journey contains coincidences and ultimately some beautiful irony. The ending seems to be heading for a letdown but I found myself completely satisfied by it. Philomena learns that she could have never provided a life for her son that he ended up having.

Today, irresponsible single mothers are given tax payers money to help take care of their children while irresponsible single mothers in the 1950s were encouraged to give up their children to families who could afford to take care of them. You could use this film to defend either point of view. I choose to take away from this film proof that life is beautifully unpredictable and great things can come from hardship.