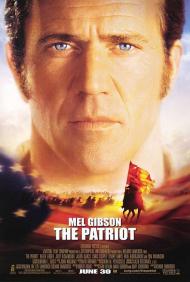 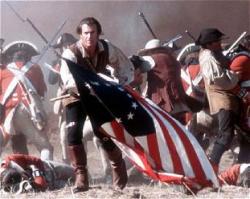 Mel Gibson in The Patriot.

British beware! Mel Gibson is at again. He fought them first in Braveheart, now he's killing English soldiers again in The Patriot.

The Patriot is a smart, violent, and patriotic movie about the American Revolution. Gibson plays a veteran of the French and Indian War who is now settled down with his family. He would rather find a peaceable solution to the colonist's grievances, but when circumstances throw him back into battle, he takes up the cause with considerable gusto.

Any movie involving patriotism must walk a thin line, lest it tip over the edge and become too corny. The Patriot leans way out on occasion, but manages to keep itself from falling.

Its use of symbolism is particularly interesting. It ranges from the obvious, Gibson's use of his son's toy soldiers melted down into bullets, to the more subtle. The first to die and to do the killing, are children, emphasizing the loss of innocence.

By far the most enjoyable portion of the film takes place during the middle two-thirds. Gibson leads a group of ragtag militia who harasses the British from their base in a swamp. They become a sort of colonial Robin Hood and his band. Even including a Friar Tuck in the guise of a Minister.

Several of the scenes in this movie will surprise and shock you. With not only violence and gore, something this movie has in abundance, but also with some nasty surprises that those conditioned by Hollywood to last minute rescues and the good guys always triumphing may find shocking.

Gibson, who is in his serious and sincere mode here, does a fine job of acting. Some moments of true emotion are probably his best work ever. Gone is his trademark cockiness and shit-eating grin. The rest of the cast are also good, particularly, Jason Isaacs, as the evil, over the top British Colonel.

Roland Emmerich, the director, does a great job. Not only are the battle scenes elaborate and bloody, but the quieter scenes are beautifully filmed as well. He refrains from including any long, melodramatic speeches and instead keeps the pace moving. This is a good thing since this movie is almost three hours long.

The Patriot, like Saving Private Ryan before it, shows that the freedom we have in this country did not come cheap, and those who gave there lives for it should long be remembered. And it gives you one hell of an action movie on top of that. 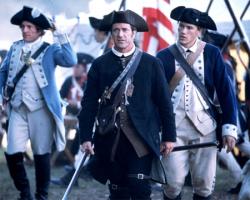 Mel Gibson and Heath Ledger in The Patriot.

While I certainly enjoyed this movie, I also found more flaws in it than mentioned above. Yes, the battle scenes are amazing, and yes, Mel Gibson does some of his finest acting, however, I was not nearly as impressed with the pace or the script.

This movie takes way too long establishing the different characters and more specifically the hero's reluctance to go to war. In my opinion, very few films should approach three hours in length, although this seems to be a popular recent trend.

Script wise, I did not buy the harmonious race relations. After all, this is South Carolina in the 18th century, yet we are to believe that Mel Gibson's all black "workers" are free men without any explanation. Another sticking point, albeit a small one, happens when one of the female characters says, "Why not? It's a free country isn't it? Well, at least it will be." Somehow, I just do not think that was a part of common English speech in the 1770's.

Granted these are all minor points, and The Patriot, for the most part, is rousing Fourth of July entertainment that will have you cheering along. 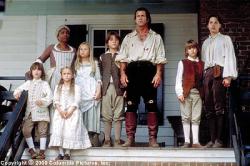 Mel Gibson in The Patriot.

Like Scott and Patrick I agree that Mel Gibson does his finest acting to date. Perhaps it is that in real life he is a father of many children. So playing a father of 7 children comes quite naturally.

Now I am going to break precedence and agree with Patrick on a plot point. The "slaves" that work for/with Mel's character are free? The slaves in this movie are all just a bunch of happy folk that just love their white masters. What shit is that? The creators of this film talk on the DVD about all of the historical accuracy's that they put in this film. Yet they treat slavery like it wasn't that bad. They have one character who gives one black man a slight teasing once or twice, but by the end of the movie he tells the black man how honored he is to fight with him. That's all nice and polite but hardly realistic. I understand politically correct Hollywood does not want to offend people. (unless your fat, but that's another conversation) Lets not become George Orwell's 1984. There are things in our countries past that are ugly and it would do us good to remember them, and not white wash it with how we wished it had been. OK I am done ranting.

The movie is long, but moves along quickly. I have no idea what Patrick is referring to in questioning the pace. (Hey, I agreed with him once. don't get used to it.) The action is the best since The Last Of The Mohicans. I wanted my son to watch it, but the gore and violence is graphic. My favorite part in the film was the flag waving with Mel carrying it. I was in the service, where you are taught to respect the flag and what it stands for. I am a Patriot and damn proud to say it.