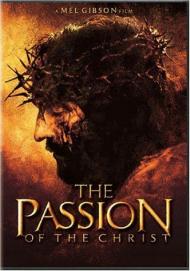 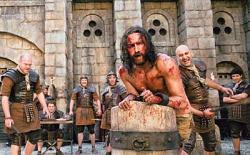 James Caviezel in Passion of the Christ.

Amid the controversy and accusations of excessive violence that surrounds Mel Gibson's The Passion of the Christ, lies a good movie. With so much sound and fury, it is hard to judge this movie strictly as a movie, but that is the mindset you need to have if you go to see it. If you walk into the theater expecting anti-Semitism, then that is what you will get out of it. If you focus solely on the gruesome portions of the movie, then that is all you'll remember about it. If, however, you can leave your preconceptions at the door, then you'll find that this is a gorgeously filmed story that packs an emotional punch.

The story has been told many times before and in many different variations. It begins the night before Jesus' crucifixion when he is praying in the grove of trees while two of his disciples keep watch and continues through the next and final twelve hours of his life with only the occasional flashback to cover the events that led to this finale. We see his arrest, "trial", his scourging, and finally his death.

How this movie stands out from earlier versions of the story is in its intense and bloody depiction of violence, which contrasts with its beautiful cinematography. The violence, which has been the subject of much debate, is completely justified and I can explain why. Whether you believe in the divinity of Christ or not, in this movie he is the Son of God. In less violent and more sanitary movies, which depicted the crucifixion, you had to wonder just what was the big deal about him suffering here on Earth when he knew he was going to be ascending to heaven when he died. Here he literally goes through Hell before he is able to rise again. He is whipped, flayed, and scourged while hunks of flesh and spatters of blood fall from his body. The word 'passion' is derived from the Latin word for suffering, and here for the first time you see a Christ who truly suffers.

Amid the violence, there is also beauty, as it was with obvious care that each scene was put together. The colors and lighting were done so that at times the events resemble an oil painting. Equal care was also taken with the sets, costumes, and makeup so that, at least to my untrained eye, it all seems quite authentic.

One of the most intriguing additions to the story is the inclusion of Satan. A creepy figure cloaked in black with the face of a woman but the voice of a man, he/she flits around the action observing all that happens and taking part in the punishment of Judas.

The one area where this movie is lacking is in its back-story. While what happened is a story most people know, the reasons, political and religious, that Christ was put to death, are less well known. This movie explains that Jesus is accused of blasphemy, but doesn't really delve to deeply into why his death is sought so desperately. Also, looking at it strictly as a movie, if you didn't already know the story of Christ, you would have a hard time grasping the subtler motives and events. As an example, if you don't already know who Mary Magdalene is, you're not going to fully appreciate her character. Clearly the filmmakers expectations were that the audience would already have an understanding of this story and would require little in the way of exposition.

Whether you go to see this movie because of religious beliefs or just out of curiousity to see what all the fuss is about, you have to admit that it was marketed brilliantly. Without a doubt, thanks to all the controversy, it is going to be a hit, at least for the first couple of weeks. I think Christ said it best when he said, "Love your enemy, because he'll be the one racking up those box office numbers for you." -- or something like that. 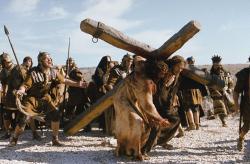 James Caviezel in Passion of the Christ.

No matter what your religious belief, The Passion of the Christ will invoke an emotional response. Whether you believe him to be the son of God or not, you cannot help but feel for his pain and suffering. The scenes of his flogging are graphic, but they are necessary to illustrate the sacrifice he is making. More than once during his pain did a tear force its way from my eyes.

Jesus's mother, Mary, is engagingly portrayed by Maia Morgenstern. It is because of her presence that Jesus is more personable. This woman is emotionally tortured as she watches her son be beat to death. Can any parent in this world imagine a worse experience?

This film is definitely made for people with some knowledge of the Bible. Like Scott, I would have liked some more of the back story. Just why were the Jewish leaders so anxious to get rid of Christ? I guess I will have to read the book. Also, I wished for more of an ending. After watching Mary suffer so much, I would have liked to have seen the scene where she discovers Jesus has risen from the dead. A testament to any good movie is when the audience wants to know more. 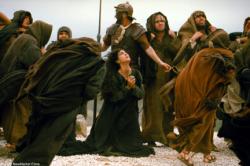 Monica Bellucci in Passion of the Christ.

My first thought after watching this movie was, 'I wonder if Mel Gibson really pictures Satan as a drag queen?' But seriously, this is a beautifully shot movie that was obviously made by someone who felt incredible passion for its topic. All the claims of anti-Semitism and overly-graphic violence are completely unjustified. I personally don't believe in God but this movie follows the story as it appears in the New Testament. Period. Yes, it is difficult to watch, but hey, it's about a man getting tortured and nailed to a cross because of his beliefs. Was I the only one who felt guilty munching popcorn during the scourging scene?

Scott makes a good point that in the reality of the movie Jesus is the actual Son of God. Just as I can suspend disbelief and accept that E.T. is really from another planet, so was I able to accept that Jesus was being put to death for mankind's sins and that Satan was a kinky little character slithering around in the background. As a nonbeliever I can only judge this movie as a work of art. In that context it is brilliant. The scenes of Jesus on the cross are like Renaissance paintings brought to life.

James Caviezel is very good. His suffering makes Jesus seem more sacrosanct than ever but at the same time more identifiably human. It is a tour de force performance.

The Passion of the Christ is the definitive screen version of the death of Jesus.