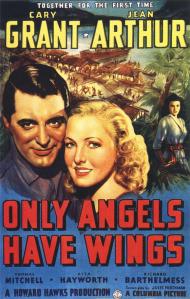 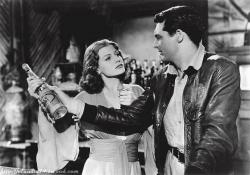 Rita Hayworth and Cary Grant in Only Angels have Wings.

Only Angels Have Wings is billed as an action/adventure film. It does have some aerial danger and decent effects for the time. However, it stalls several times with too much dialogue and far to much romantic interest and plot distractions.

Arthur plays a showgirl right off a boat in a South American port. She meets up with some fly boys and her few hour lay-over becomes several days, largely due to her interest in Grant, who runs the airport freight service. He and his pilots fly supplies, mail and occasionally people over the dangerous Andes Mts. One of the pilots, Arthur first meets, dies early on and she is struck by how the rest of the guys take his death.

To add more drama and a bit more romantic intrigue, a former, unpopular, employee shows up with his wife asking for a job. The wife, Hayworth, is an old flame of Grant's. Arthur is, of course, suspect and she has plenty of reason to be. Hayworth is gorgeous! This is one of her first roles of note and she makes Arthur disappear into the background like white wall paper.

I am a big Cary Grant fan but this is a role he should have never played. His character's personality is described several times. In one scene, Arthur says to Mitchell, "Say, isn't that girl the one he used to be in love with?" Mitchell responds, "Bonnie, when it rains, every third drop falls on one of them." In another scene, Arthur is talking to Grant about his independence, "No looking ahead; no tomorrows; just today." to which Grant says, "That's right!" Not only did Grant have a great screen persona but the guy could actually act. Here however, he ends up coming across a bit dull. The role of hard drinking, danger loving, cold hearted, love em and leave em Carter would have been better suited to the likes of Clark Gable or Humphrey Bogart.

Only Angels Have Wings is classic only for its stars and director Hawks. Hawks also co-wrote the screenplay. So I give him the blame for a movie that runs 2 hours and seems like three. He should have trimmed many talking scenes and centered more on the action and less on all of the many dramatic side plots. 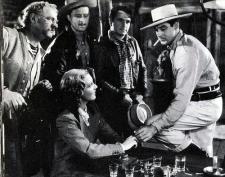 With more action and less romance this would have been a great movie.

I agree that this is not a great movie but it is better than you give it credit for Eric. The weakest aspect is the lukewarm love triangle between Grant, Arthur and Hayworth. The relationship between Grant and Arthur seems completely contrived and they have very little chemistry together. The sparks do fly between Grant and Hayworth but they get very few scenes together.

Rita Hayworth looks stunning and this is the movie that put her on the map. It is also the movie that created a myth about Cary Grant. For years whenever an impressionist did him they would say, “Judy, Judy, Judy.” Grant never actually uttered that line but Hayworth’s character is named Judy and he does say her name several times in his unmistakable voice.

The true emotion in the story is between the men, especially in the friendship between Grant and Mitchell, who, by the way, was having one hell of a year in 1939. Besides Only Angels Have Wings, he appeared in Gone With the Wind, Stagecoach, Mr. Smith Goes to Washington and The Hunchback of Notre Dame. It was also nice seeing Richard Barthelmess in a comeback role as the disgraced pilot. He had been a well known star during the silent era making his movie debut in 1916 and hitting his peak in several D. W. Griffith pictures opposite Lillian Gish.

The best parts of the movie are the action scenes. The planes flying between peaks in the Andes Mountains hold up fairly well and they provide moments of real tension. Howard Hawks had been a flyer during the first world war and he claimed that all of the action sequences in this movie had been things really experienced by him or someone he knew.

If the romance had been trimmed by completely eliminating the Jean Arthur character and having the love triangle be between Grant, Hayworth and Barthelmess this could have been a 4 star classic. Too bad. Oh and Eric, I see your point about this being more of a role you would expect Gable or Bogart to play but I think that Grant is just fine in the part. He could be a tough skirt chaser when a role called for it. 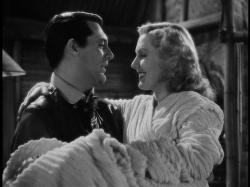 Cary Grant and Jean Arthur in Only Angels Have Wings.

You're both crazy.  Sure Hayworth is hot as hell and would of course become the much bigger star, but they should have cut her part completely.  Not only does she do a poor job of acting, the love triangle isn't needed at all and never really goes anywhere.  Jean Arthur's character is all the romance angle that is needed since as you said Patrick, the real story is the camaraderie between the pilots, particularly between Jeff and Kid.

Although it did take a bit of getting used to seeing Grant play the serious tough guy, I thought he did a great job.  I still prefer him in lighter roles, but he shows he's got range here.  Gable would have played the part too cocky and who would have ever believed that Bogie could get one woman to love that ugly mug of his, let alone two?

I also disagree with you Eric that this movie feels too long.  I actually thought the pacing was pretty brisk.  It does run nearly two hours, but apart from Hayworth's part, I didn't think there were any superfluous plot points.

The best moments are definitely the flying scenes, although much of the drama during those scenes takes place on the ground.  When Grant is trying to talk down the plane at the beginning of the movie, for example, the plane isn't shown until the end.  You just hear it overhead and the pilot's voice on the radio and yet it's one of the tensest scenes in the  movie.  It's an effective piece of direction by Hawks, as is the rest of the film.  You give him blame Eric, but I think he did a great job.

This is a much better movie than you give it credit for, Eric.