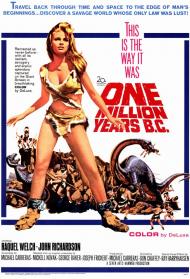 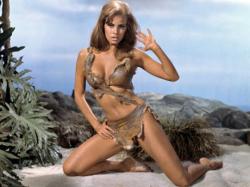 Your first thought when it comes to One Million Years B.C. is no doubt, Raquel Welch in a fur bikini. Although that is not at all a bad thought, and the one thing that this movie will be remembered for, this film does offer up a bit more than just that.

The movie opens on a clan of cavemen. There is a power struggle between the leader and his two sons. One son gets banished from his tribe. He wanders through a barren wasteland for a bit, dodging dinosaurs, until he comes across another tribe. Actually, he gets saved from a giant turtle, by a bunch of cave babes out for a swim and some fishing. This tribe is a bit more advanced than his, but less war like. He learns from them and ends up leaving with the clans hottest babe. They journey back to his tribe, avoiding dinosaurs along the way. His new hottie has to fight his old hottie and he has to fight his brother. Eventually a new order is established and mankind takes a step forward in evolution.

The effects for the time are decent. Real life lizards are used as stand ins for dinosaurs as well as stop action models. Sure they don't compare to today's CGI, but if you can accept the tornado in The Wizard of Oz then you can buy this stop action.

Other than Raquel's star quality, One Million Years B.C. proves a very important point. You can make a movie, and tell a story without any dialogue. Other than a narration at the beginning, no one in the film speaks a discernible word, yet a plot exists and characters, although quite simplistic, are created.

However, this movie was made in 1966, the same year that, out of shape, Adam West was playing Batman. Camp was the flavor of the day. One Million Years B.C. has a bunch of cavemen with bright shiny white teeth and brushed hair. The girls have smooth shaved legs and wear pushup bras. Granted, all of that makes these cave women nicer to look at, but it is hardly realistic. Historically it makes no sense either. Man and dinosaurs did not exist at the same time. Also, there is a vegetation eating Brontosaurus shown walking around the barren landscape.

If the director was not even going to attempt any sort of realism, then he should have just included dialogue. Of course, had he done that, the audience would have had to put up with Raquel Welch's dialogue reading and we would be commenting as much on her lack of acting ability as her lack of clothing. 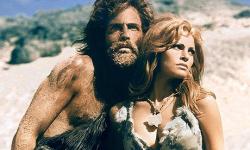 John Richardson and Raquel Welch in One Million Years B.C..

This is a remake of One Million B.C., which was produced and directed by Hal Roach and his son in 1940. One Million B.C. was also the final movie that the legendary D. W. Griffith worked on, although he later insisted his name be removed from the credits. The 1966 version copied the main plot as well as a few individual scenes from that earlier movie. Both movies include a child caught in a tree during a dinosaur attack, and the makeup worn by Robert Brown as the Rock Tribe leader Ahkoba is the same as that worn by Lon Chaney Jr. in the first version. Carole Landis originated the part that would make Raquel Welch a star more than a quarter of a century later, and Victor Mature was the male lead in the role that John Richardson plays here.

As Eric wrote, the special effects in the 1966 version hold up quite well, especially when you consider the technology then available. These visual tricks by the legendary Ray Harryhausen are certainly an improvement over the 1940 version, which included, among other things, a pig in a rubber triceratops suit and an alligator with a glued-on sail. As my brother mentioned, these effects were achieved by using a clever mix of photographically enlarged real creatures with stop-motion ones. A wide variety of dinosaurs appear in the movie. All of them were based on actual creatures that once roamed the earth, although some liberty was taken with their physical dimensions. For example, the giant turtle Eric mentioned is an Archelon (a prehistoric sea turtle), but the one in this movie is at least three times the size of the largest fossil specimen ever found.

Eric, there are a few discernible words spoken alongside the grunts and moans. Besides each others' names the women in the Shell Tribe actually call the giant turtle “Achalon” a word clearly based on its scientific name. It is yet another example of how much more advanced they are than the war-like Rock Tribe. You would think though that with this very rudimentary language that consists mostly of grunts, the acting would be easy. Apparently not. Raquel Welch's grunting was dubbed by Nikki Van der Zyl, and John Richardson somehow manages to over-act his grunts and grimaces.

One Million Years B.C. is a silly campy treat that moves along at a nice clip. It was filmed on the Canary Islands which provides the movie a proper prehistoric looking setting. But in the end none of that really matters. It's all about Raquel in that fur bikini. This flick, along with the sci-fi hit Fantastic Voyage, made her a star and for the next decade she was the reigning female sex symbol in the movies. 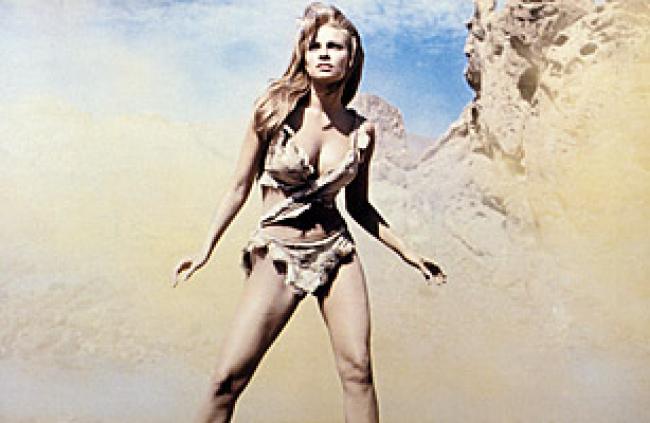 I disagree Eric. Welch in that fur bikini is the only thing this movie has going for it. She was 26 years old with a body in perfection condition despite already being the mother of two children. With curves in all the right places and with some of those curves teasingly displayed in such a way as to make you think you might see more of them, she immediately draws your eyes to her. Whenever she wasn't on the screen I lost all interest in the film.

Although it's the film that made her a star, Welch has written dismissively of it since and thought little of it at the time, begging the studio, "Please, please don't make me do the dinosaur movie." On the first day's filming she approached the director saying that she had a thought about the script, but was rebuffed and told, "Look, just start at rock A and run to rock B, and in the middle pretend that you see a giant turtle coming over the hill." Even the famous bikini shot was no pleasure to shoot, as it was actually winter when the photo was taken and it was so cold that they needed to run a heater to keep the camera warm, but as Welch reported, no one thought to put one near the actress.

I do agree with my brothers that the special effects aren't too bad all things considered. However, I would add that while the stop motion animals are still effective, the super-imposed giant iguana and tarantula are less so. They are much more obviously faked, despite being real creatures. And during the volcano eruption at the film's climax, it's easy to see when the rear-projection starts.

Patrick called this silly camp, but I don't think it's silly or campy enough. It takes itself dreadfully serious and what laughs there are to be found are unintentional and are mostly derived from the historical inaccuracies and silly wigs. The cave women in push-up fur bras, with waxed eyebrows and sparkling white teeth are also chuckle worthy, but have the benefit of offering a pleasing distraction. And the dance performed by Welch's rival in the Rock tribe was deemed so risque at the time of its release that it was cut from the version shown in American theaters.

I also disagree with Patrick's assessment that it moves along at a nice clip. I thought it dragged every time Welch or a dinosaur wasn't visible on the screen.

As for Eric's statement that this movie proves, "You can make a movie, and tell a story without any dialogue.", I thought Hollywood proved that 50 years before this movie during the silent era. Personally, I think skipping the dialogue didn't help at all. Why not just have them talk? It's not as though the filmmakers were going for realism in anyway. And speaking of speaking. I found it odd that the film begins with a short narration but then stops. I kept expecting the narrator to return at some point, or at least at the film's climax. Just having it at the beginning felt odd.

Welch in that bikini was the only thing I knew about this movie before I watched it and it's the only thing that will stay with me now that I've seen it. The rest is best quickly forgotten. 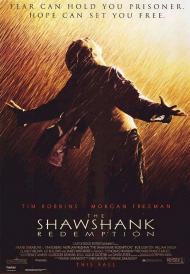