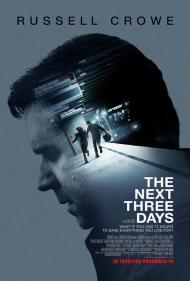 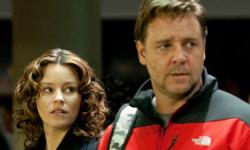 Elizabeth Banks and Russell Crowe in The Next Three Days

Even before I started watching this movie, I was skeptical of the plot, which is never a good thing. A "normal" man plotting the elaborate prison escape of his wife just sounds as though it's going to be rife with plot holes. To be fair, I don't know if there really are holes per se, but the plot does require an awful lot of coincidences to make it work. On the plus side, Russell Crowe does an excellent job as the decent bloke trying to reunite his family the only way he sees possible and Paul Haggis directs with finesse, keeping things tense, even if the action does take too long to get going and the running time is about 30 minutes too long.

Crowe plays community college professor John Brennan. His wife Lara is accused of murdering her boss and sent to prison. Her guilt or innocence is left a little up in the air for most of the movie, which I think was a mistake. I mean, a man trying to break his innocent wife out of prison is easier to root for than a man trying to break his murderer wife out of prison. After three years and exhausting the appeal process, John and Lara are out of options. Not wanting his six year old son to grow up without his mother, John decides his only option is to break his wife out of prison. But just how does a middle-aged, law-abiding college professor go about doing that?

His first step is to interview someone who has broken out of prison, under the guise of writing a book. The former escapee is played by Liam Neeson in a cameo appearance. It's kind of a silly scene that seems to be thrown in just to include Neeson. He talks vaguely about prison escapes and gives him two pieces of important information, which is that after the escape John will have 15 minutes to get out of the city center before it's shut down and 35 minutes to get out of the city completely. Surely, the internet could have provided the same information?

The title of the movie and the urgency of the escape are explained when Lara is informed that she will be moved in three days time to a maximum security prison. It's this announcement that prompts John to get moving. Although there are one or two tense scenes before then (especially one involving John's attempts at using a "bump" key on a prison elevator), it's from this point on that the movie really takes off. It's just a shame it takes so long to get to this point.

I guess the length preceding the escape attempt is an attempt to show what it takes to force an ordinary guy to the point where he will do whatever it takes to free his wife. The problem is, it doesn't. John's actions, certainly during the scene where he robs some drug dealers to get the money he needs, is way out of character. Couldn't they maybe have mentioned he served time in the military when he was younger?

The actual escape is exciting and well filmed. It moves along at a fast pace and keeps your interest. However, if you stop to think about the details, you realize just how much it all depends on coincidence for it to work. John had to know exactly how people were going to react to his actions for his plan to work. It's a very delicate plan to say the least. It's best at that point in the film to just try and not think too much about the details of it all and just go with it.

The Last Three Days is a decent enough thriller that is aided by the combination of Crowe in the lead and Haggis in the director's chair. All it really needed was a tighter edit job. 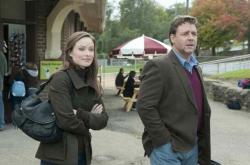 Olivia Wilde and Russell Crowe in The Next Three Days

The choice facing the makers of The Next Three Days was the issue of Lara's guilt or innocence.  Scott felt that leaving the truth up in the air for most of the movie, was a mistake.   His argument that it should have been known ahead of time because a man trying to break his innocent wife out of prison is a more sympathetic character than a man trying to break his murderer wife out of prison.   If you look closely at the scene where John goes through the evidence and we see in flashback the crime happen, it is clear that it is not Lara who committed it.   Lara was wearing a white jacket while the person shown using the extinguisher as a weapon is wearing a dark jacket.

I disagree with Scott.  The tension would have been far greater had the audience been lead to believe that either innocence or guilt was a possible outcome.   The first scene of John visiting Lara in the prison sets the tone that clearly John believes Lara's innocence.  If John and the audience were left in the dark, the expectation of what is the truth would have kept the anticipation much higher than just whether or not he can get her out of prison.  As this film is over two hours long, it needed something to help elevate the tension.  Half way through, it briefly tries to muddy the issue, but it last for all of a minute.

Scott felt that John robbing and killing the drug dealers was way out of character.  I was not bothered by it being out of character so much as I was that John becomes a criminal in the process.   Now I am supposed to root for a murderer?   John is a likable guy caught up in an injustice, but having him become an actual murderer does not garner any sympathy points.  In fact, it dissolves the importance of whether or not Lara even committed the murder.

The murders of the drug dealers are intended to show just how much John loves Lara, and how far he will go for her.  He could easily just divorce Lara and pursue the gorgeous single mother played by Olivia Wilde.   The Next Three Days is a love story in which a man will do anything for the woman he loves.  However, love in and of itself does not justify leaving a stranger's dead body on a city bench after he died in your car, after begging you to save him, after you caused him to be in that situation to begin with.

The role of John Brennan is perfect for Russell Crowe.  He never comes across as a movie star.  He looks as if he woke up, kissed the wife and kids good bye and then put a days worth of work in on the set.  He is not in great shape.  His beard is speckled gray.  Sure, you can chalk all of this up to the characteristics of his character, but they are also his traits.  You would never describe Crowe as a pretty boy or metrosexual.   This role is how I picture Crowe in real life, only with more Fosters beer and less killing.