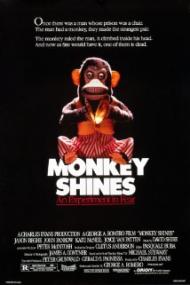 Monkey Shines was supposed to be zombie king George Romero's first commercial film. Financed by Orion Pictures, it was the independent horror maven's first studio production. Something he would later regret after studio bosses insisted on a happy ending. Then when the movie didn't go over well in previews they added a shock moment at the end without Romero's knowledge. When Monkey Shines ultimately failed to find an audience, the director was content to return to the world of independent cinema.

For a movie that was supposedly aimed at the mainstream, this is one bizarre little horror flick. The first half it's a slow melodrama. When law student and runner Allan Mann (Jason Beghe) gets hit by a truck, he's rendered quadriplegic. He goes through a period of depression, even attempting suicide. A scientist friend of his suggests a helper monkey to assist Allan and hopefully cheer him up as well. What Allan doesn't know is that Geoffrey (the scientist friend - played by John Pankow) has been injecting the monkey with human brain tissue. The monkey, formerly known as specimen number six, is now named Ella by Allan. They bond and share some creepily intimate moments while listening to classical music together.

At one point Monkey Shines strays briefly -and oddly- into The Man Who Came to Dinner territory. Allan has a sharp tongued caretaker named Nurse Maryanne Hodges (Christine Forrest). She hates Ella and is disgusted by the whole idea of having a monkey in the house. She and Allan bicker like Monty Woolley and Mary Wickes in that classic 1940's comedy. When Nurse Hodges' beloved pet parrakeet Bogey (named for the actor) turns up dead, she points her finger at Allan, melodramatically confronting the quadriplegic in front of his mother Dorothy (Joyce Van Patten).

Nurse Hodges: You killed my Bogey!

Dorothy: Maryanne, I think you're confused.

Nurse Hodges: Not with his hands. He had his little demon do it for him.

The second half of the movie things turn deadly. Nurse Hodges, it turns out, is partially right. Allan and Ella do share a psychic bond through which Ella receives his revenge fantasies. Being an animal, however, Ella can't differentiate fantasy from reality or right from wrong. Without Allan's knowledge she begins killing those around him – beginning with the aforementioned annoying pet bird. The psychic connection between Ella and Allan manifests itself by causing Allan to, at times, temporarily grow monkey fangs. In the movie's most disgustingly strange moment he bites into his own lips causing blood to trickle out. Ella climbs up and happily licks the blood off of Allan's lips.

Ella's potential victims include Allan's new lady friend Melanie (Kate McNeil), who just happens to be an expert in both quadriplegia and helper monkeys. Monkey Shines remains one of the very few movies to feature an intimate sex scene involving a severely handicapped individual. But you know Ella isn't going to take her new human competition lying down.

This movie about a quadriplegic and his killer helper monkey takes itself so seriously it's laughable. And the acting is bad with a capital B. Jason Beghe is particularly guilty of overacting. His distraught pleas of, “No Ella! No Ella!” are unintentionally humorous. The rest of the cast isn't much better. In fact the most believable performance in the movie belongs to Boo, the Capuchin monkey that played Ella. Not only did this male monkey have to play female, he also had to be adorable and then become a stone cold killer. If they gave out Oscars for Best Animal, Boo would have been hard to beat.

In defense of Jason Beghe’s acting, overacting is probably the only route to take when working with a killer capuchin monkey. I was never bothered by his delivery of any line as this movie has vastly more problems than that. Did you not just read that it features a tiny murdering monkey?

Seriously folks, the climax of the film features a grown woman wrestling with a small simian. An adult capuchin monkey may weigh, at best, nine pounds. Last time I checked, your average bowling ball weighed twice that. When this tiny animal was on top of her, all she had to do was grab it and throw as hard as she could. Instead, she lays there screaming frantically as she waves her hands in wild defense.

There have been many films about someone confined to a wheel chair being threatened by someone or something. What Ever Happened to Baby Jane? (1962) comes to mind. The opportunity for frights and scares were there, but unfortunately Romero was not able to find the right tone. A scarier plot may have been to simply have the nurse fall in love with Beghe and have her kill anyone who crosses her or threatens her relationship with Beghe. Think of how creepy the bathing scenes could have been.

Jason Beghe has had many small roles in movies. He was the state trooper Thelma and Louise locked in the trunk of his patrol car. Monkey Shines, as sad as it may seem was the height of his film career, giving him his most notable starring role. Lucky for him, there is television, in which he has appeared on lots of shows. He can now be seen on television in Chicago P.D., a spin off from Chicago Fire.