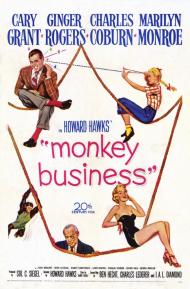 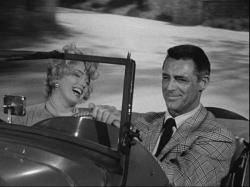 Cary Grant and Howard Hawks worked together on some great comedies. Most famously in Bringing Up Baby and I Was a Male War Bride. One of their collaborative efforts is often over-looked. In fact, if it wasn't for a famous supporting actress, it would probably be a near forgotten film. That would have been a shame though, because Monkey Business is a truly funny film.

Grant plays an absent minded professor, Barnaby Fulton, working on a youth formula. The opening shot of the movie has Fulton coming through a door as Howard Hawks's voice says, 'Not yet Cary.' It sets the tone for this screwball comic gem.

Fulton can't get the youth formula to work. However, a lab monkey gets out of it's cage and creates the formula for him. Fulton drinks it and throws the rest into the office drinking water. Feeling young and frisky, Fulton takes the day off from work to go carousing with his bosses secretary, Monroe. He gets his hair cut short to match the then teenage style. He buys a tiny sports car. Fulton and the secretary go rollerskating and swimming. In one scene Grant is on the high dive about to jump off. 'Everybody watching me?' he gleefully asks before jumping. Of course only Monroe is paying attention as all the other guys at the pool are staring at her in a bathing suit.

The fun really begins when Fulton's wife (Ginger Rogers) accidentally drinks the formula. She turns into an over anxious teenager. She gets jealous of the time her husband spent with Monroe and calls her a 'peroxide kissing bug' She and Grant go out dancing and end up in a hotel room. Rogers is great in these scenes. The formula has restored her virginity and she is completely nervous about being alone with her husband.

Later in the film they each drink more formula and act like children. They argue like siblings, getting into a paint fight. Grant hangs out with some children playing Indians. They end up helping him tie up and scalp a man who has the hots for his wife.

The movie is quick and funny. Although it falls into the absurd a bit, it still has a lot of laughs to offer. In one scene Charles Coburn asks his secretary, Monroe, to 'Find someone to type this.' As Monroe pouts and walks away, Coburn looks at Grant and says 'Anyone can type.' Near the end of the movie Rogers thinks her husband has been transformed into a baby. Monroe walks over to touch him, but Rogers stops her, explaining that the baby is defenseless.

This is a great comedy that actualy says somethings about what it is to grow up. As an adult, Fulton's wife isn't jealous of Monroe. As a teenager she is livid. As an adult, Fulton is mild and confident. As a teenager he is insecure and a show off. As children they both fight and over react to everything. According to this movie, growing up means learning to control your emotions and subsequent actions. It is an accurate statement along side some funny performances. 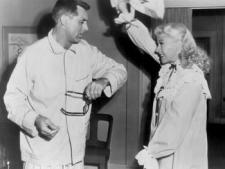 She could have married Hank Entwhistle you know!

Eric, you mention that Rogers is jealous of Monroe, but you fail to mention her funniest line. "I'll tear her blonde hair out by its black roots!" That and the line you do mention, "Anybody can type." are probably my two favorite lines in the whole movie.

I disagree that this movie is saying growing up means controlling your emotions. I think it's saying that when you're young your emotions and your hormones control you. It's not that as you get older you learn to control them. It's just that you don't feel them quite as strongly.

The only small problem with this movie is that it takes a little while to get going and despite not being that long, seems to last a bit too long. It's really a one joke premise. Adults acting like teenagers and children. When Grant and Rogers are on, the movie is funny, but it's not a plot with a great deal of staying power. It also seems to take a while to get going.

Once they do take the formula though, the movie is hilarious. Grant is great as always, but Rogers steals the movie. Her arguing with Grant and her jealousy towards Monroe make the sparks fly. "I should have married Hank Entwhistle!" She was nominated for a Golden Globe for the part.

And speaking of Monroe. She is hot in this film. She doesn't have many lines, and she's playing a very dumb blonde ("Mr. Oxley said I needed to work on my punctuation so I came in early."), but damn she looks good doing it. The bathing suit she wears isn't very revealing but what it does show is all woman.

I don't know how well this movie is remembered by others, but I've always remembered it pretty fondly, especially for Ginger Rogers. 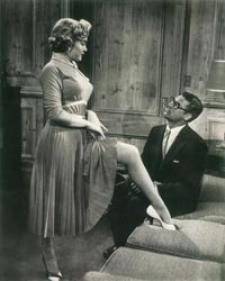 Marilyn shows off her gam to Grant.

Eric, I have to nit pick again. Fulton doesn’t throw the rest of the formula into the drinking water. The chimp did that. The formula that Fulton made and drinks doesn’t work. It isn’t until he drinks the water containing the formula that the chimp made that he feels the effects.

That said I agree that this movie has some funny scenes and Marilyn Monroe was at the peak of her sexual ripeness. She definitely adds charm to the festivities. However, I think both my brothers are being a bit generous with their praise. Overall this movie isn’t that good. I agree Scott that it takes a while to get going. The opening scene between Grant and Rogers is terrible. I didn’t think they had good chemistry together at all until after drinking the B4.

It’s interesting to note that Ginger Rogers was nearing the end of her film career while Marilyn Monroe was near the beginning of hers. Cary Grant, however, was smack in the middle of his illustrious career. He had been making movies for 20 years and would remain one of the top male box office stars in the world for the next 15. Monkey Business is but a minor entry in the careers of all three of these movie legends. 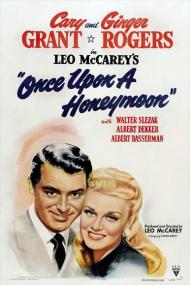