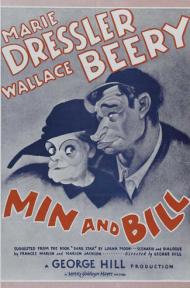 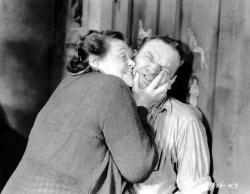 Marie Dressler and Wallace Beery in Min and Bill.

In 1930 Min and Bill was a surprise hit at the box office, catapulting 62-year-old Marie Dressler and 45-year-old Wallace Beery to the top ranks of Hollywood movie stars. Both of whom had been toiling in the industry as character actors since the early silent days. The 17-year-age difference between them gets made fun of when Min mentions to Bill that she used to make the men “zing” when she was younger and Bill replies, “Oh sure, you mean way back in the Civil War days.” In real life Dressler was born just 3 years after the war ended.

Min owns a waterfront inn and Bill is a fisherman that rents a room at her place. Although not romantically involved they are, in many ways, like an old married couple. They bicker and trade barbs but share an obvious affection for one another. They may just be the least attractive leads ever in a Hollywood movie but the chemistry they share is quite believable.

In perhaps the movies most talked about scene they have a knock-down, drag-out tussle all around Bill’s room because Min caught him getting drunk and frisky with another woman in Min’s room. Dressler doesn’t hold back. At one point she is dragging Bill across his bed by his pant leg when Beery cries out, “You’ll pull my pants off!” They then fall to the floor and literally roll on top of each other all across the room. It builds to the point that Bill is cowering in a closet while Min vigorously attacks the door with an axe. It is one of the funniest and most invigorating fights you’ll likely ever see in a movie, especially one between a middle-aged man and a woman in her 60s.

The central plot revolves around Nancy, an orphan raised by Min. When the story begins the authorities have decided that the now teenaged Nancy should be in school and perhaps living in a healthier environment. Things get even more complicated when Nancy’s slatternly, drunken, prostitute mother, Belle, shows up. Min mercifully told the child her real mother was dead.

Marjorie Rambeau, as Belle, is a similar type to Mae West. She has Mae's swaggering walk and hand on hip pose and has the same suggestive inflection in her voice when calling Bill, “Big Boy.” Belle is more of a villain than West ever played however.

Min and Bill has a few chuckles but as a comedy it hasn’t aged all that well. Beery as the dim bulb Bill gets several amusingly self-deprecating lines. When Belle says to Bill, speaking about his face, “I’ve seen worse.” He takes it as a compliment and proudly replies, “I’ve heard that before.”

The acting by Dressler though is about as unsubtle as you can get. She mugs shamelessly for the camera. Ironically, it is only in the film’s final, highly melodramatic scene that she downplays her reaction and as a result has her most emotionally honest moment. It is this scene that surely won her the Academy Award for Best Actress. In fact I was going to give Min and Bill 2 ½ stars but the ending convinced me to give it 3. I won’t give it away except to say that it is quite touching and not how you normally expect a movie billed as a comedy to end. 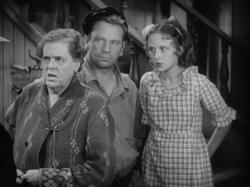 Hell yes, this is a three star film. At just over an hour, this movie packs in some serious drama and plenty of laughs. Mostly it has Wallace Beery and Marie Dressler playing vastly likable characters with a most unique relationship.

The movie starts with Beery bringing some liquor ashore he got from some Russians out at sea. He asks Min if she has ever heard of Vodka and if she would like to try it. She responds, “I’ve drunken everything from bug juice to rock gut.”

Patrick mentioned the joke Bill makes about Min’s age. What Patrick did not mention was that Bill makes that joke while Min is shaving him with a straight razor. “What's that about the civil war days?” Min asks with the blade to Bill’s neck.

The drama comes in the form of Nancy, whom Min has raised since she was an infant. Nancy is under aged yet several adult men flirt with her with obvious desires for physical attention. For her part, Nancy enjoys the flirting and encourages it. One man gets her alone and shamelessly smirks to her, “I know a way you can make a lot of money.”

Luckily for Nancy, Min and Bill are there to protect her from dangers she is too immature to realize exist. As Patrick wrote, with the authorities and Nancy’s biological mother poking around, Min decides to send Nancy away to live a better life. It is the decision of a truly great parent who puts what is best for her child above her own need to have the child she loves near her.

Also as Patrick noted, the ending is surprisingly dramatic, not for what Min does but for what she does not do. This little movie packs an emotional wallop and some genuine laughs. Ah hell, Min and Bill is a three and a half star movie. 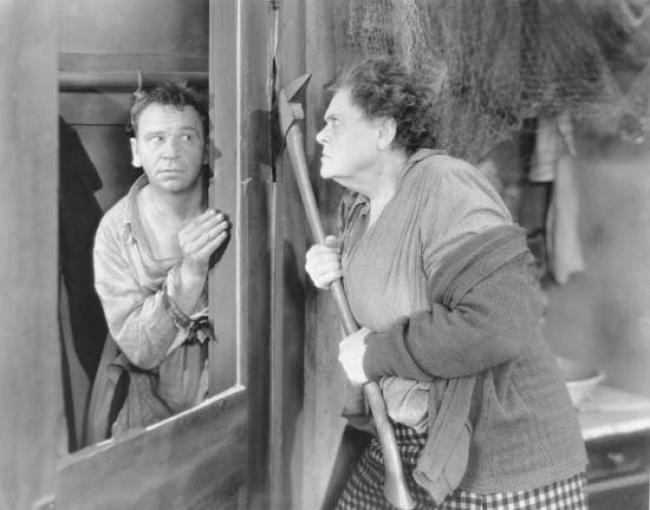 Wallace Beery and Marie Dressler in Min and Bill.

I had a similar reaction to Patrick's. The melodrama and some serious overacting from Marie Dressler had me thinking this was a 2.5 star film, and the final scene elevates the story, but not enough for me to award it that extra half-star. Undoubtedly, it was this scene that nabbed her the Best Actress Oscar, the one and only win and nomination the movie received from the Academy.

Audiences of the time certainly ate it up. The film earned $2 million at the box office, which is paltry change by today's standard, but back then anything over $1 million and you were in blockbuster territory. And in true Hollywood fashion, such a success couldn't be left alone. Dressler and Beery were reteamed 3 years later, in the similarly themed Tugboat Annie.

I also agree with Patrick that much of the comedy hasn't aged very well. There's a protracted scene with Dressler and Nancy in an "out of control" speedboat that's both not very funny and poorly edited. The best comic moments are definitely the ones between Beery and Dressler. Their arguments, which range from the verbal to the physical, are amusing and demonstrate that you don't need to be pretty to have chemistry.

The story is pure melodrama. It's only made palatable by the humor and the touching ending. Even with that ending, I'm rather surprised by Dressler's Oscar win. She pretty shamelessly mugs it up for most of the movie. She doesn't seem to have adapted to performing in a sound film and the more subtle style of acting it required compared to silent movies.

Dressler's career was long and varied. She started appearing on stage in 1882 when she was just 14 years old. By the 1890s she was a headliner on Vaudeville. By the time she made her first movie in 1914 (Tillie's Punctured Romance), she was 46 years old. Although she was popular in these early silent movies, her movie career waned after she helped organize a union for chorus girls, which would eventually turn into Actor's Equity. For several years she lived off of her savings and was even rumored to be applying for housekeeper jobs to make ends meet. Her career was resurrected in 1927 when an old friend, Frances Marion recommended her to Irving Thalberg, which lead to a contract with MGM. After the success of Min & Bill, She became one of the most popular actresses in Hollywood and was earning $5,000 a week. Sadly, it would only last a short while because Dressler would pass away from cancer in 1934. It's odd to think that thanks to the advancement in technology, more people probably saw her in just one of her movies, than saw her in all of her Vaudeville career.

Although watching this movie now, it's hard to fathom just why it was so popular, it's nice to know that it hasn't been forgotten. In Walt Disney World's Hollywood Studios, there is a boat turned restaurant named "Min and Bill's Dockside Diner", which features the likeness of Dressler and Beery above the entrance.